The President’s supporters are questioning his lack of leadership, which doesn’t bode well for a second Obama term. 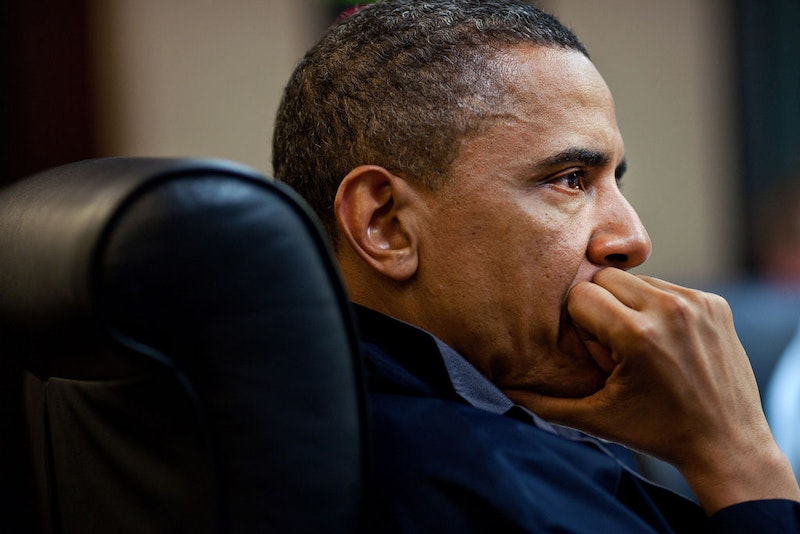 It’s nearly impossible in the current Beltway environment—soiled by elected officials so out of touch with their constituents that they’d all be voted out of office today if that were an option—to make an educated guess on the fate of the national (and by extension, the global) economy and whether President Obama can win reelection next year, $1 billion campaign fund notwithstanding. I’m writing on Monday morning, and two days hence, after the Aug. 2 debt ceiling line in the sand has passed, who knows, the DJIA might plunge 1000 points and citizens will make a run on the banks. Supposedly, there’s a fuzzy plan in place right now, but there’s no guarantee it’ll make it through Congress. It matters not a whit that this writer isn’t enmeshed in the DC media frenzy, Twaddling and Tweeting and Twiddling about the minute-to-minute events in Congress—not the White House, for the “people’s house” has gone dark—since pundits both liberal and conservative have no idea of what’ll happen either.

Unless you’re Paul Krugman, The New York Times Gloomy Gus-for-hire who can’t stop bleating that “Republicans have, in effect, taken America hostage” and Democrats, including Obama, are complicit in their waving a white flag to the “fanatics,” willing to bankrupt the country. When details of Sunday’s plan were released, Krugman claimed that Obama had “surrendered” and now the United States is going “down the road to banana-republic status.”

Yet I don’t think it’s an exaggeration to stress one political reality in this summer of 2011: the debt crisis has accomplished what just months appeared the stuff of a fantasy Hollywood blockbuster. And that’s the plain fact that Americans, of whatever economic views, right or left, can’t stand the men and women who are their putative representatives in the national’s capital.

Peggy Noonan, the former Reagan speechwriter and author who writes a weekly column for The Wall Street Journal isn’t the most objective pundit about the Democratic Party, yet she’s not a shill for the GOP, blasting President Bush during his second term and welcoming the election of Obama in ’08. Noonan’s glow has long disappeared—it seems like a decade ago—and last Friday, in a column about the disappointment shared by Obama’s onetime rapturous supporters, deviated from her essentially optimistic tone and was brutally blunt. She concluded: “So [Obama] is losing a battle in which he had superior forces—the presidency, the U.S. Senate. In the process he revealed that his foes have given him too much mystique. He is not a devil, an alien, a socialist. He is a loser. And this is America, where nobody loves a loser.”

That’s harsh, worse even than calling Obama the present-day Jimmy Carter. Now, Noonan’s no Ann Coulter, a professional conservative provocateur who views politics as a means to pad her bank account, but her sympathies lie with the Republicans, so take the “loser” label however you want. The Washington Post’s Jonathan Capehart was offended by Noonan’s “loser” tag, saying it was “uncalled for.” (That recalls Dan Quayle’s limp response to Lloyd Bentsen’s devastating JFK line in the veep debate of 1988.) Capehart’s on thin ice, though, since the only person he can name who disputes the loser label is his ex-boyfriend Giuseppe, who told him “Don’t believe her! I LOVE [Obama], and I LOVE the family instinctively.”

Yet, the following writers, all firmly in the Democratic camp, all of whom predicted a glorious resuscitation of America upon Obama’s election, are hardly more upbeat in their assessment of the AWOL president.

Robert Reich, the first Clinton Labor Secretary, who was “dazzled” by Obama in ’08, said the following in The Huffington Post: “[T]he man who has occupied the Oval Office since January, 2009 is someone entirely different—a man seemingly without a compass, a tactician who veers rightward one day and leftward the next, an inside-the-Beltway dealmaker who doesn’t explain his compromises in light of larger goals… A more disturbing explanation [for Obama not speaking directly to Americans] is that he simply lacks the courage to tell the truth.”

Longtime left-winger William Greider, says in The Nation: “The president has done grievous damage to the most vulnerable by trying to fight the GOP on its ground—accepting the premise that deficits and debt should be a national priority.” For good measures, he calls Obama’s actions “mendacious” and “facile.”

The New Republic’s John Judis refused to believe what many of his liberal colleagues are saying, that Obama’s morphed into a conservative, but is distressed, as the headline of his July 30 piece suggests: “If Obama Likes Lincoln So Much, He Should Start Acting Like Him.” Worried about next year’s vote from “independents,” the key to any election, Judis speculates that what these men and women “might… want from a president is leadership and not mediation, even if they disagree with some of Obama’s policies.” Applying the stinger, Judis says that Ronald Reagan and George W. Bush enjoyed “great popularity,” (the former with the country at large; the latter with his rock-solid GOP base) enough to win reelection, because they didn’t waffle in their beliefs.

Finally, the Times’ Maureen Dowd takes a slightly different approach, expressing amazement, and a weird kind of admiration, that the “[T]owel-snapping Tea Party crazies” have “changed the entire discussion” in Washington, and made Obama and House Speaker John Boehner irrelevant. She concludes: “What if this is all a cruel joke on us? What if the people who hate government are good at it and the people who love government are bad at it?”

So is Barack Obama a “loser”? By all accounts, certainly not as a man, but politically he’s in real trouble right now and should the GOP tap a presidential nominee who can string two sentences together and not ramble about the Rapture, Obama looks like a one-termer. Even Mitt Romney could win. The silver lining for liberal historians is that if what once seemed impossible occurs—for at the beginning of 2009 it was trumpeted that the Democrats would rule Washington for a generation—it’ll be a bull market for “What Went Wrong” books.