It’s all rooted in Chicago politics. 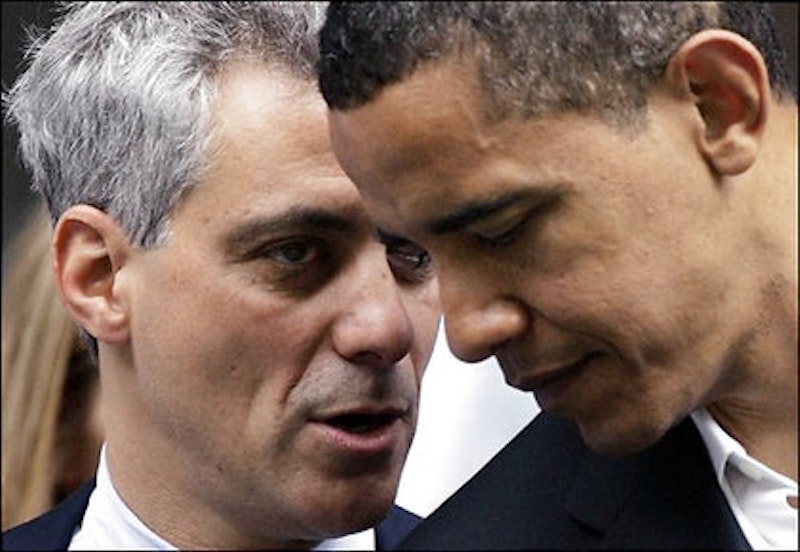 This week, at the behest of mayor Rahm Emanuel, Chicago Public Schools closed 49 neighborhood schools  despite the protests of parents, teachers, students, communities, and basically everyone affected.  At the meeting where the schools were closed, there were chants, and desperate appeals. But the people in charge just ordered security to carry out the especially intransigent, and went on about their business.

Meanwhile, on the national front, Emanuel's buddy and former boss Barack Obama was having one of the worst weeks of his presidency, amidst revelations that his administration is apparently trying to criminalize national security reporting in a paranoid effort to prevent leaks. James Goodale, the lawyer who represented The New York Times in the Pentagon Papers case, has compared Obama's actions in this case to Richard Nixon's, which seems reasonable. Personally, though, I was more horrified by this absolutely nauseating story about how the Obama DOJ is prosecuting three pacifists—one an 82-year-old nun—who entered a nuclear weapons production facility as an act of protest. They were originally charged with trespassing. However, the DOJ eventually decided to charge them with sabotage and obstructing the national defense. In a trial at which testimony relating to religious or moral convictions was apparently disallowed, along with any testimony related to First Amendment rights, the three were convicted, and now face 35 years in prison.

When Obama was elected in 2008, he promised to preside over the most transparent administration in history. Instead, as Bradley Manning could tell you, Obama's administration has been pathologically secretive, treating leakers as enemies of the state and declaring that even the legal rationale for the drone war in Afghanistan is classified.

So what happened? I've seen people argue that Obama had good intentions, but was basically corrupted by the Washington national security establishment, or the power and responsibilities of the presidency. This sounds credible. It also has the virtue of suggesting that people like me, who voted for him in 2008, were not simply dupes when we believed he was serious about transparency. Or, for that matter, when we believed that he was a decent human being.

But, as Goodale points out, Obama's secretive bullshit started almost as soon as he got into office.

"It started the first month he was president, with a holdover case from the Bush administration regarding torture. Lawyers sought government records that described the torture, and the DOJ lawyer representing Obama said they were going to resist the disclosure. The judge said something along the lines of "There's been an election, hasn't there?" And the Justice Department said nothing had changed. The president had campaigned on a platform of transparency, but that wasn't the reality."

There's one answer to all those questions. "Chicago."

When people call Obama a Chicago machine politician, they think they're accusing him of corruption. But (unlike the Illinois governor's office) Chicago in the past decades hasn't really been much more corrupt than any other urban center. Sure, there's corruption here, but corruption isn't what characterizes Chicago politics.

What does characterize Chicago politics is dictatorship. That was the tradition under Mayor Daley, and Emanuel is cheerfully carrying it forward. The closing of the CPS school system is extreme, but also indicative. Bureaucratic decisions are passed down from above, and you can either stand in the way and be crushed—or try to get out of the way and be crushed. Community meetings aren't organized to solicit community input, but simply to say, hey, we had a community meeting. For instance, hearing officers appointed by CPS found that many of the school closings were unwarranted and even unsafe. Emanuel just shrugged. Listening to other's opinions? Transparent decision-making? That's not the Chicago way.