Will anyone even notice if front-runner Anthony Brown wins? 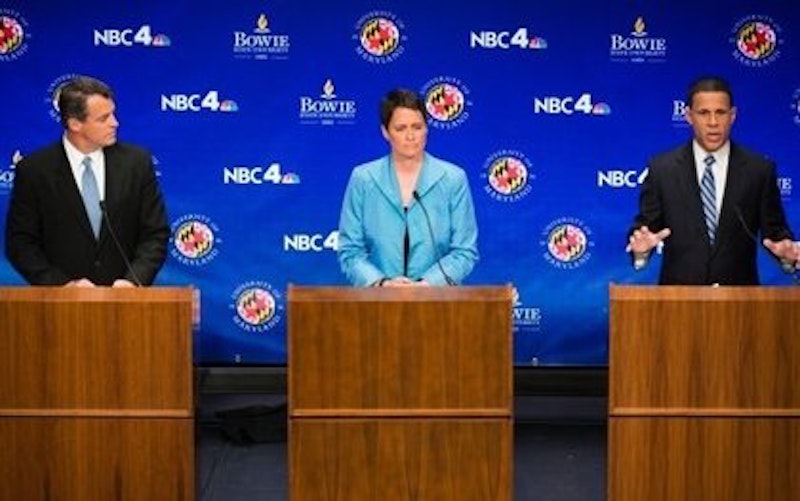 Fundraising is a form of autobiography. How much money a candidate can raise says what a candidate does and how well people think he or she does it. Fundraising in Maryland is also a show of confidence in a wager as well as a down payment on the future. There’s really no need to wait for polls to determine voter sentiment in Maryland’s race for governor. Just follow the money and the Twitterverse. The money part is easy. It follows the leader.

Ahead in the polls by 20 points, Lt. Gov. Anthony Brown vacuumed $1.24 million in the past month and a half and has $4.1 million to spend. He is followed by Atty. Gen. Douglas Gansler. who raised $312,000 during the same period and has $3.1 million in the bank. Del. Heather Mizeur (D-MoCo) has $1 million available, including matching funds from the state’s public financing pool. The numbers are all in the latest filings at the state board of elections.

The three candidates are already investing heavily in media buys in both the Baltimore and Washington markets which pretty much blanket the state, even with some overlap. The cost of media placement in Washington is about double that of Baltimore because of the size of the markets—with DeeCee being the nation’s fourth largest and Baltimore ranking 23rd.

But here’s an even more incisive guidepost to the human inertia gripping the June 24 primary elections. Most polls show about 40 percent of the electorate as undecided, which is usually a sign of a middling voter turnout and an unintended advantage bestowed upon the candidate with the best voter delivery organization.

Twitter agrees. The combined Twitter accounts of Brown, Gansler and Mizeur—all Democrats—have fewer than 22,000 followers, roughly 10,800 for Brown, 5000 for Gansler and 5700 for Mizeur. The numbers for Brown and Gansler remain virtually unchanged over the past nine months, so it appears that this is one area where campaign spending is not nudging the needle even a millimeter. Twitter reveals the same lack of voter enthusiasm as the polls.

To put the matter into perspective, Taylor Swift has 41 million Twitter followers, though it is doubtful that her baby-blues are fastened on Maryland’s governorship nor that she feels threatened that her standing will be overtaken by one of the state’s candidates.

Question: What do Republican candidates for governor of Maryland have in common with Chinese restaurants? Answer: Dim sum.

Republicans are supposed to be the party of big money while Democrats are the party of the people. You’d never know it by their financial reports

Of the four GOP candidates for governor, the nominal leader in the polls and in the money chase is Larry Hogan. He’s raised more than $1 million in the few months since joining the race. But he didn’t have to go far to get it. Half the cash is money that he loaned himself, according to reports. Hogan, like Mizeur on the Democratic line, has agreed to public financing of his campaign.

David R. Craig, the Harford County executive, has $144,000 on hand. He, too, has agreed to public financing, but so far has failed to raise enough seed money to qualify.

Charles Lollar, a Charles County businessman, has about $18,000 on hand but his debts outweigh his bank account. The fourth GOP candidate, Del. Ronald George, of Anne Arundel County, missed the filing deadline.

The paltry cash-flow on the GOP side of the ballot reflects three realities: Pessimism that the party can overcome the numerical odds of being out-registered by more than 2-1; the absence of a potentially divisive fight among Democrats that would provide the opening Republicans need to win; and the death of the Maryland GOP’s premier fund-raiser, Richard Hug.

In 2002, for example, many Democrats turned their backs on Kathleen Kennedy Townsend to support Republican Robert L. Ehrlich Jr. for whom Hug raised nearly $20 million over the election cycle. In 2006, even as Ehrlich lost to Gov. Martin O’Malley, Hug almost replicated his earlier fund-raising numbers to the point where O’Malley was forced to borrow money to match Ehrlich’s spending.

Another exception in the governor’s race was the unwarranted intrusion of WBFF-TV (Fox 45) into the campaign’s internal business. Many analysts, including those who collect a paycheck for watching TV, saluted the Baltimore station for its ballsmanship in proceeding with a scheduled debate after Brown declined to participate. It wasn’t community service; it was a TV stunt, and a trite one at that. As if proof were needed, the debate is now a campaign issue and a commercial that Fox 45 indirectly provided.

Brown, Gansler and Mizeur had agreed to three debates. Their handlers worked out the dates, times and locations. Later a dispute arose among the candidates over whether the agreement meant three TV debates or, as Brown’s camp insisted, two TV debates and one radio encounter. To Brown, three is three, no matter what the medium. But Gansler and Mizeur insisted on a literal interpretation that in modern politics three debates implies television. That was the business of the candidates and not of the media or WBFF.

After the debate schedule had been released, WBFF began promoting, repeatedly, its own invitation to debate, which Brown declined and Gansler and Mizeur wisely accepted. That should have been the end of the story, as it usually is with other invitations that end up in the shredder. But there followed an almost daily reminder that the invitation to Brown was still open even though he was emphatic more than once about not participating. A great big Bronx cheer to Fox 45 for meddling.

During presidential election years, for example, campaigns, along with an independent commission, work out the debate details such as the number, frequency, moderator, panelists and locations. Once the schedule is announced, that’s the end of it—no freelance interference by overlooked networks, cable channels and independent stations. A television station, after all, is nothing more than a publicly regulated utility with pictures.

No matter which candidate won or lost or scored points by being there or skipping the debate, WBFF inserted itself into the middle of a campaign as a negotiator and mediator that could influence voters by employing the hackneyed and long-abandoned device of the empty chair, in this case a vacant lectern labeled with Brown’s name. The artifice hasn’t been used hereabouts since the late Brent Gunts, of WBAL-TV, used to issue his thunderclap threats back in the 1960s and 70s, when TV debates were a novelty before becoming a staple of politics.

Even on the day of the debate, WBFF was bull-horning its invitation with reminders that Brown had until six p.m. to accept the invitation to the eight p.m. debate with his Democratic rivals. Their promotion stated that the event was the only debate that would originate in Baltimore for a Baltimore audience.

While technically that might be true because their audience is limited, has WBFF never heard of its state-sponsored competitor, WMPT, which broadcasts statewide from Owings Mills and is one of the two stations originally included on the debate schedule? The WMPT debate, co-produced with WBAL-TV, takes place tonight. And WBFF, along with Baltimore’s other commercial TV stations, did not volunteer to carry an earlier debate originated by Washington’s NBC 4 and offered to Baltimore stations. WMPT did.

The role of the media is supposed to be impartial and neutral. Yet occasionally throughout the debate, WBFF’s camera(s) lingered on the lectern assigned to Brown, underlining his absence as a flip of the bird at the host TV station as well as the viewers. Politics and the media can be a toxic mix unless they butt out of each other’s internal business and the media sticks to covering the news instead of inserting itself into the story. In this case, Fox 45, and not the candidates, became the story which is probably what they intended all along.