A generation of kids raised on political execution tapes and snuff films. 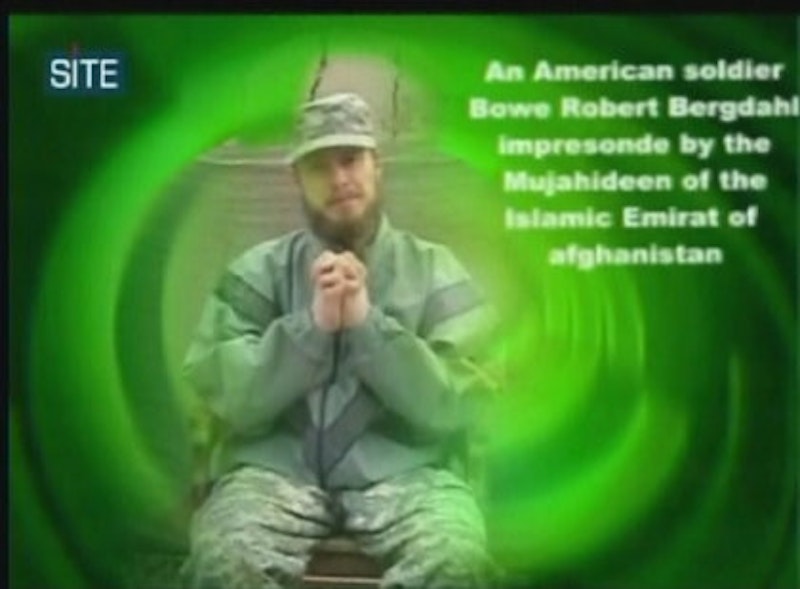 The first prisoner swap in the history of our 13-year War Against Terror (now in HD) has been a sad reminder of all the highly publicized abductions and execution tapes that came in waves in the years immediately after 9/11: Nick Berg, Paul Johnson, Daniel Pearl, Ronald Schulz… No network would ever show the deed or any violence, just stills and horrifying clips of people who know they’re about to be murdered slowly and sloppily in the most painful way imaginable—reading copy given by their captors disavowing their country, their religion, their side in a war they’re representatives of by location and grim luck. This kind of brutal intimidation and trauma was unprecedented, not only by the demonic murderers, but by the media and the White House, who knew that tapes of malnourished and abused Americans first being stripped of their dignity and then horribly mutilated would surely keep us too scared to want out of a war we never figured out. It makes you sick. You shut down.

Exposure and access to stuff like this was free and easy to kids my age: though TV only teased it, these tapes were all over LimeWire and early p2p networks. People of a certain age might be surprised how many Millennials grew up having seen at least one if not several videos of people and/or animals being killed, tortured, or abused. It was fairly common talk in high school: I remember bonding with a close friend in ninth grade over a video of the “Pain Olympics”: men cutting off their dicks and pulverizing their balls with hammers. Later, maybe 12th grade, I remember a thoroughly straight-laced kid in my advisory talking about something a friend made him watch: a Russian soldier getting his head beaten in with a hammer. “So gross,” he said, as if he had come across a clogged toilet instead of graphic footage of someone being murdered. Can’t forget the more mainstream and victimless shock videos: “2 Girls 1 Cup” was a sensation my first year in high school, fitting comfortably alongside other goofy viral hits of 2007 like “Chocolate Rain” and “LEAVE BRITNEY ALONE!” Nothing was shocking. Oh yeah, and the guy that died getting butt-fucked by a horse. It was all entertainment, distraction, and part of the sick carnival of the Internet that we grew up inside.

I was talking to a friend last night about the exchange of Sgt. Bergdahl and what it could mean, how confusing it is that we would acquiesce with hundreds of American prisoners of war still held hostage. Neither of us was particularly well-read on the murky story, so we swiftly shifted to reminiscing about growing up and being haunted by snuff films we sought out or our friends made us watch on dark corners of the Internet in a post-9/11 world. She felt “haunted” most of all, unable to forget the naked paralyzing horror of watching someone die messily against their will. The Boomers saw Lee Harvey Oswald shot on live TV, but that was ancient technology. Footage of Pennsylvania State Sen. Budd Dwyer’s bloody suicide at a press conference in 1987 circulated on VHS but you had to seek things like that out, and it takes a certain kind of person, you know what I mean? Slaves to curiosity and impulse, more kids saw snuff films in the 2000s than ever before because of how easy it was and how highly publicized some of them were. If you’re looking for another cause for our malaise, over-sensitivity, delusions, and cocoon-like self-obsession and insulation, consider the severe doses of reality we fed ourselves unsupervised during that decade.