None of this Chitting and Chatting 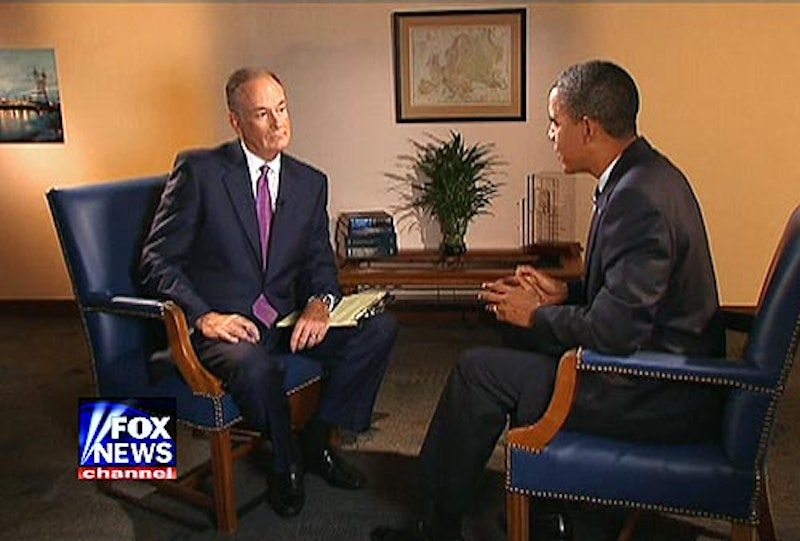 Quien es mas macho? O’Reilly! His head is granite, his ribs ironclad, his soul a furnace that belches forth white flames of self-importance. That’s why he is where he is—in this case, sitting across from the president while the country’s most popular news channel records their conversation (transcript).

“All right, Mubarak,” O’Reilly says because the President is taking too long with his thoughts about freedom of the press and the Fox correspondents who were rescued in Egypt. A minute or so later, talking about Mubarak, the president has to silence O’Reilly by lifting a finger and cutting his eyes hard over in their sockets. Obama pulls it off, but he looks like a man battling hard in mid-debate. Yet the moment comes toward the start of the interview, and the two weren’t really going at it. O’Reilly just decided that the president’s train of thought (“…but one that’s a meaningful transition and that leads to a government that’s—”) needed a good spank on the ass (“So you don’t know when he’s going to leave.”).

The 14 minutes have plenty of moments like that. O’Reilly is willing to cut some slack, but slack-cutting is not his way of life. The President’s words find themselves in the middle of traffic; school children left behind by a school crossing that has magically disappeared. Meanwhile, a nearby truck has places to go.

Characteristic remarks, O’Reilly edition. “Who’s going to win the game? Come on! Come on, come on.” Also: “A tremendous country. Right? It is.” And: “Those are tough boys, the Muslim Brotherhood. I wouldn’t want them anywhere near that government.” And: “They’re not going to bother with it, though.” And: “I know all that. I listen to it every day.”

Characteristic remarks, Obama edition. “Well, I don’t think that’s—” Also: “And that’s something that I think the majority of Americans—” And: “I haven’t … I didn’t move to—” And: “What I’ve said to the Republicans is if you have ideas in terms of improving the health care system, if you have ideas I can embrace on things like—” And: “It could affect …” And: “Well, that—look …”

Ain’t beanbag. On the subject of Mubarak, the interviewer lets out something of his world view. “Mubarak knows a lot of bad things about the United States,” O’Reilly says. To which Obama responds primly, “The United States and Egypt have been a partner for a long time.” O’Reilly: “Right. He’s done the bad things.” Obama: “He’s been a good partner when it comes to the peace with Israel. There have been counterterrorism efforts that he’s been very supportive of.” Because Obama is pretending that the two sentiments—done bad stuff, been good partner—are opposed. O’Reilly knows the two are really the same, that Mubarak has been doing America’s dirty work. O’Reilly takes the same view of the alliance’s behind-the-scenes workings as a radical who’s hipped on Omar Suleiman and extraordinary rendition. It’s just that O’Reilly doesn’t mind any of that. “I’m just worried that he might go off the reservation,” he says of Mubarak. Luckily he doesn’t suggest an operation to take out America’s ex-boy; there are cameras around. He moves on:  “The Muslim Brotherhood … Are they a threat to the U.S.?”

The following bit boils down the two men’s difference in views:

Other topics. In order, these are: The district court ruling against health care reform and what does Obama do now. (A: We don’t want to go back.) The Wall Street Journal says you’re a left-winger. (A: No.) Why don’t people like Obamacare? (A: It’s an even split.) What’s the worst part of the job? (A: Wearing a jacket today.) Your friends say you’re preoccupied. (A: What?) Do you mind how there are all those people who hate you? (A: No.) Who’s going to win the Super Bowl? (A: Who knows, Bears aren’t playing.) So you like football, not just basketball? (A: Sure, plenty.)

Obama folksiness. About his guests when the game is on: “I don’t want them coming up chitting and chatting.” Not that Sarah Palin would use the phrase.

O’Reilly graciousness. “Give it your best shot.” “Every president does” (on going gray). “And I have to say, I enjoyed talking with you.”