The Shabby Case Against ObamaCare

Judge Roger Vinson's ruling was executed in bad faith and with faulty logic. 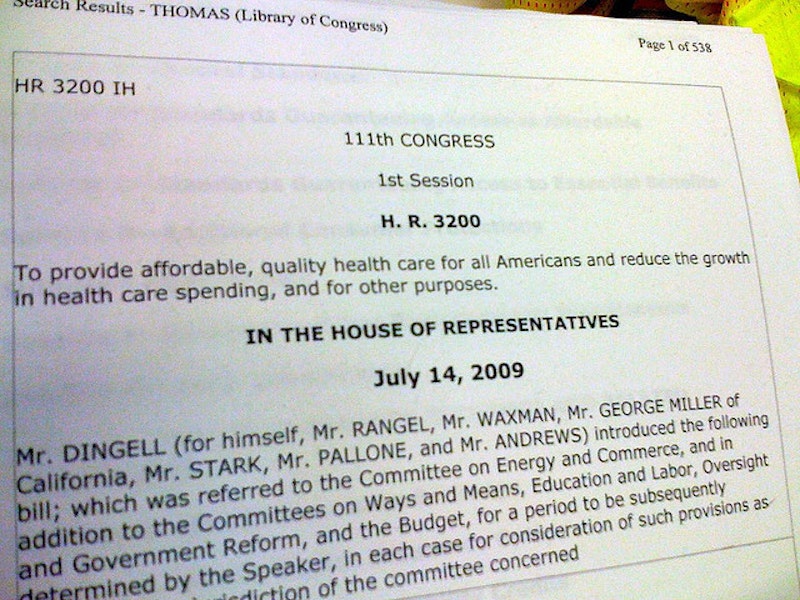 At the start of his ruling last month striking down health care reform, Florida’s Judge Roger Vinson writes (full ruling here; subsequent numbers refer to the original document): “This case is not about whether the Act is wise or unwise legislation,” and “it is not really about our health care system at all. It is principally about our federalist system, and […] the Constitutional role of the federal government.” In truth, Judge Vinson’s opinion is about neither of these issues. It concerns President Obama. His decision, clearly guided by an originalist, libertarian and religious outlook, is, like the entire conservative case against reform, a reactionary attack on the president. As with every Tea Party talking point, it is steeped in lies, hypocrisy, and perverse revisionism.

You’d expect to encounter all these problems when perusing Tea Party forums and listening to Republican politicians. But for a judge to resort to this behavior is particularly dangerous because he need not answer to anyone; and this must give us pause when we consider that the ultimate health care verdict will likely come down to Supreme Court Justice Anthony Kennedy’s swing vote.

Judge Vinson’s misinformation is astonishingly and embarrassingly transparent. In an effort to portray reform as oppressive, he asserts without any evidence that “a single twenty-year-old man or woman who only needs and wants major medical or catastrophic coverage,’ for example, is precluded from buying such a policy under the Act” (38, FN 14). According to the Urban Institute, however, under the Affordable Care Act “a catastrophic plan will be an added option available to young adults under age 30.”

Judge Vinson further charges: “Never before has Congress required that everyone buy a product from a private company (essentially for life) just for being alive and residing in the United States” (38). In fact, health care reform does not require that “everyone” buy insurance—according to Politifact, exemptions apply to “those for whom insurance premiums would be a financial hardship, Americans with religious objections, American Indians, undocumented immigrants and prison inmates.” In addition, we need not purchase from “a private company,” since reform provides many private and public insurance options from which to choose.

In any case, the notion that Congress has never mandated that private citizens must buy a product is conclusively overthrown by the 1792 Militia Act, in which Congress required every white male age 18 to 45 to “provide himself with a good musket or firelock, a sufficient bayonet and belt, two spare flints, and a knapsack” on pain of potential court-martial, rather than a mere fine/tax, as in the case of health care reform. It is ironic that Judge Vinson, a purported devotee to the Founders’ intent, ignores this fact in his decision.

Adding to the hypocrisy, he claims that “as the Supreme Court presently defines it” (43), Congress does not have authority to regulate interstate commerce by penalizing inaction, which could create unlimited federal power (whether refusal to buy coverage, which would drain insurance pools and deprive others of health care, constitutes inaction is a matter of heated debate). This contradicts Justice Antonin Scalia’s prevailing opinion in Gonzales v. Raich, that “where Congress has the authority to enact a regulation of interstate commerce, it possesses every power needed to make the regulation effective” (though I wouldn’t be surprised if Justice Scalia conveniently forgets this when he writes his ruling on health care). We must also bear in mind that although the Supreme Court has never explicitly granted Congress authority to penalize inaction, it has never forbade the practice either; thus, by assuming penalizing inaction is unconstitutional, Judge Vinson’s argument is false in its own terms, since at another point he claims that “all federal legislation carries with it a presumption of constitutionality” (39).

There are many other falsehoods. His remark that “It was not until 1887, one hundred years after ratification, that Congress first exercised its power to affirmatively and positively regulate commerce among states” (28) is a classic instance of historical revisionism. It was the very first Congress that regulated interstate commerce by passing “an Act for registering and clearing vessels, regulating the coasting trade, and for other purposes,” requiring American ship owners to register their vessels and follow rules when traveling from Baltimore to Philadelphia. This explains why many feel Judge Vinson’s opinion would make George Washington cringe.

It is not just the blatant inaccuracies that make Judge Vinson’s decision disturbing. His tone conveys the true motivation behind his thinking: it is not fear of unlimited Congressional power, nor the “unprecedented” nature of a mandate, nor faithfulness to the Founders’ intent; it’s not even about conservatism. It’s about Obama. By referring in his ruling to then-Senator Obama’s initial opposition to mandates (76, FN30), Judge Vinson reveals more than one might immediately suspect. In this sequence he argues that, although Congress generally has power to regulate and reform health care in a “constitutional” manner, in this case it “chose to exercise… power” in an unlawful way by imposing a mandate. He points to Obama’s contradictory stances as if it supports his argument, suggesting that the President is certainly aware of legal alternatives.

Yet, as Judge Vinson notes, Obama initially countered that mandates are best avoided not because they abuse federal power but because they are impractical—by the same logic, we could “solve homelessness by mandating everybody to buy a house,” he objected during the 2008 campaign. But he came to embrace the mandate “kicking and screaming” because it is the most feasible approach. As such, it’s obvious that Judge Vinson includes Obama’s about face not to strengthen his critique of Congressional overreach or to sharpen his call for pursuing alternative “constitutional” options, but to embarrass the president.

And this pattern is perfectly consistent with the ruling’s general tone. It could not be a more blatant regurgitation of Tea Party “principles.” On top of the pseudo-originalism, false outrage and revisionism, some passages are clearly designed to please the Tea Party faithful, such as the reference to William Paley’s infamous “watch” argument for design (73-4), which prompted the people at More Than Right to proclaim, “The contest, therefore, is not over healthcare. It is a fight over who will be America’s watchmaker.” Apparently, Obama’s watch is not as well designed as god’s creations; but presumably, Rep. Paul Ryan’s plan is a closer approximation.

Similarly, Tea Party activists relish Judge Vinson’s disgraceful attempt to equate President Obama’s health care plan to “a British mandate giving the East India Company a monopoly and imposing a nominal tax on all tea sold in America” (42). Among many gross incongruities, that the British never faced elections while Obama won in a landslide does not seem to matter (it was “taxation without representation” that spurred some colonists to commit the notorious act of rebellion of which, as it happens, Washington and Franklin disapproved, the latter calling it “an act of violent injustice.”)

Judge Vinson and mainstream conservatives are concerned not with what’s in the legislation but with who wrote it. In 1993, numerous Republican alternatives to President Clinton’s health care overhaul featured mandates. Co-sponsors included Orrin Hatch, Richard Lugar, Chuck Grassley and Judd Gregg. In 2006, Mitt Romney implemented a very similar reform in Massachusetts, describing it as “liberal in the sense that we're getting our citizens health insurance” and “conservative in that we're not getting a government takeover.”

At the time, the conservative Heritage Foundation applauded Romney’s “bipartisan” plan and considered the mandate “onerous and philosophically objectionable,” but “unlikely to prove onerous in practice” mainly because the “connector,” as they called the insurance pool, would make it easy to obtain affordable insurance and enable residents ages 19 to 26 to attain “mandate light” policies (which did not include being covered by their parents’ plan). Nowhere did they call it unconstitutional. Nevertheless, the Heritage Foundation indignantly lambasted Obama for comparing his policy to ideas found in their endorsement, dismissing his reform as “a vehicle for federal control of state markets,” a gross exaggeration—it relies on state-based exchanges that must follow federal requirements—and claiming that they disowned mandates “well before Obama was elected,” as if this negates the notion that most conservatives have historically promoted the policy.

You might presume that all this is merely political posturing and that nonpartisan judges will determine the fate of reform. But, as Judge Vinson’s ruling indicates, partisan politics permeates our judicial system. And this is what makes the impending Supreme Court decision so troublesome. What a travesty it would be if millions were denied healthcare by activist, conservative judges who were not appointed by American citizens.