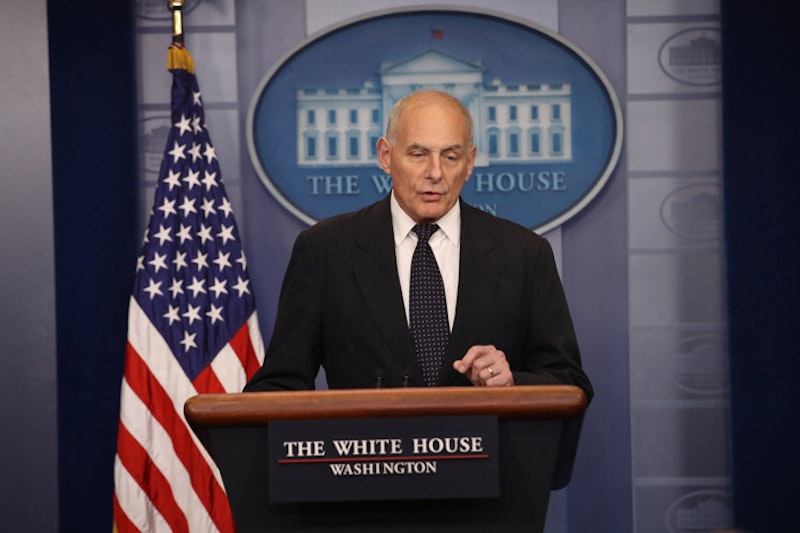 “It stuns me that a member of Congress would have listened in on that conversation—absolutely stuns me,” says General John Kelly. The call was on speakerphone, General. Speakerphone. In a car. The congresswoman—Democratic Rep. Frederica S. Wilson— was riding in the car as a friend of the family, an influential person who had helped the young man. In this car, while the young man’s widow spoke with the President, the young man’s adoptive mother and the Congresswoman also listened—they listened along. What these two women report is that the dead soldier’s widow was disrespected. Now General Kelly is doing a war dance about the imagined scene of the Congresswoman sneaking a listen. No, General. Speakerphone.

The General spoke movingly. To hear him was to hear authority, the sort that comes from scrabbling up the rockface of hard circumstance. But to listen to him was not to hear sense. The General has faced the worst that life can give us. Even so, he was full of it. He made up an offense and waxed wroth. He put on a show. That he performed his show so ably is testament to mindset. The General has things turned a certain way. “There’s nothing in our country anymore that seems to suggest that selfless service to the nation is not only appropriate but required,” says the man whose boss is Donald Trump. The point he makes isn’t wrong, but he acts like we’re proving it when his boss is.

I’m not stunned by the Kelly maneuver, but I’m depressed. A man with a dead soldier for a son is now slanging with a congresswoman about what a heel she allegedly is. Did she come out with something crass at an FBI ceremony? I don’t know, but Kelly’s boss came out with something crass about John McCain. If Kelly’s going to care about crassness, he ought to find another job. What he cares about, though, is damage control. How long the patch job holds will depend on people’s fondness for spectacle over sense. So Kelly may have done quite well by his boss, the mainstay of that unwieldy regime that Kelly hopes will impose order on our raddled nation.

Somber before the cameras, Kelly gives us the full-dress version of what he had the President tell the dead man’s widow. He shares the wisdom behind the words “knew what he signed up for.” What Kelly doesn’t recognize is that the widow never received the full-dress version. She received the Trump version, which appears to have been slovenly. “President Trump did disrespect my son and my daughter and also me and my husband,” says the woman who raised the dead man.

This was to be expected. Whatever wisdom lies behind “knew what he signed up for,” Trump doesn’t know what that wisdom is. He’s a draft dodger who thinks wars are done so we can watch them on TV. When he spoke the words “knew what he signed up for,” they came out the worst possible way because that’s how he meant it. That way is the only one he knows, and Trump can’t understand why anybody objects. The guy, the soldier, signed up and… hey.

John Kelly thinks Trump has been traduced. Well, a true patriot is a true believer, and that breed is best known for the harm that it does and the lies that it swallows. Kelly’s more dangerous than Trump.