If Don Quixote Were Kind of a Jerk

What happened when an innocent right-wing nut met Sarah Palin. 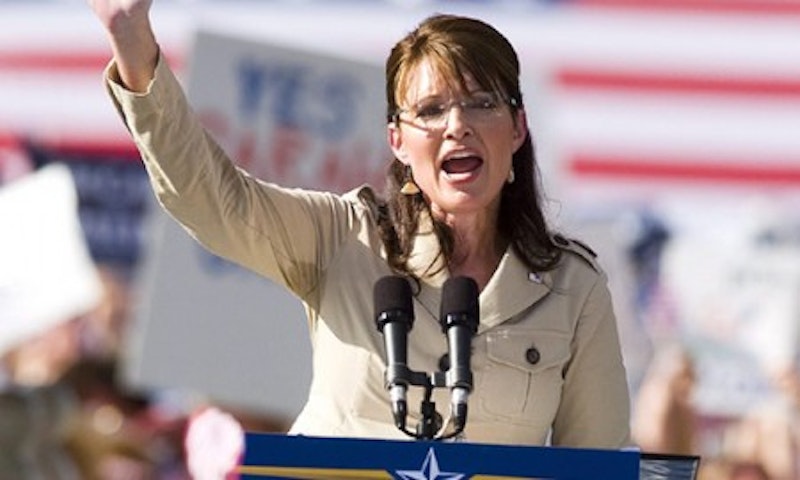 John Ziegler loved Sarah Palin, but now he doesn’t and Tucker Carlson’s website The Daily Caller has the story. Yes, Ziegler believes that Sarah Palin is “brilliant.” He thinks she’s the most gifted politician since Reagan; he even suspects that she’s “smarter” than Reagan. (I suspect she is more honest than Tom DeLay and no crazier than Newt Gingrich.) But he’s discovered that she has faults. For instance, she doesn’t like being told she’s damaged goods.

The first time he met her, back in 2009, Ziegler took a moment to let Palin know the lay of the land. “You have to know, you can’t beat Obama in 2012,” he said urgently. “The media won’t let you. They won’t let him lose and the narrative about you is too negative to correct in three-and-a-half years.” A dreadful silence followed. “I looked around at my crew, and the same thing was written on everyone’s face: ‘What the hell are you doing, Ziegler?’ It was the first of several times where it would be obvious to me that Sarah Palin does not like hearing bad news.”

Which is no doubt true: she doesn’t. But notice the mention of Ziegler’s crew. They were there because Ziegler was making a movie (the bold documentary Media Malpractice, all about how it was reporters’ fault that 53 percent of the country voted for a Democrat), and Palin had said yes to his request that he might visit her home and shoot an interview. Maybe she was surprised that a stranger and a guest in her home had started lecturing her about her career ceiling. The fellows handling Ziegler’s lights and cameras could figure this out; most of the population could. Ziegler couldn’t and still can’t, and that’s what makes him special.

John Ziegler has trouble with context. Put differently, he is a fool who overestimates his place in the universe. No wonder he likes Palin, and no wonder the two of them couldn’t get along. Given their difference in actual importance, the rupture took the form of a prolonged, distracted brushing off. One of several almost-last straws was a Ziegler message that Palin forwarded to her staff with this annotation: “If I have to suffer thru Ziegler’s e-mails, we ALL have to suffer thru.” Ziegler knows about the comment because Palin brilliantly forgot to omit his address from the list of recipients. Of course, Ziegler makes no great claims for Palin’s operational abilities. If she ever did run for president, he says carefully, “she would exceed expectations in virtually every area of a campaign (except organization),” a caveat that makes you wonder why she ought to run the country.

Well, maybe for the sake of her intellectual brilliance, if it existed. But Ziegler’s story makes more sense if we assume the existence of the standard Palin, the one who doesn’t know much and who’s always surprised when people catch her trying to fake it. Here’s an episode that still has Ziegler scratching his head. 60 Minutes had put forward “the completely twisted claim” that Palin thought Saddam was behind 9/11. “So I prepped her with notes for a rebuttal, which she texted me that she had received and liked, but when she was asked about that issue on The O’Reilly Factor on Fox News, she butchered the answer, making it sound like 60 Minutes had got it right all along.” Man, that’s uncanny. What are the odds?

The beautiful part is that Ziegler assumes Palin, the “brilliant” Palin, can’t explain her own supposed beliefs unless some responsible party gives her a hand. He sees no contradiction there because he wouldn’t notice an inconvenient fact if it were dropped on his bare toe. “The Sarah Palin I Know” is a testament not just to hurt feelings but to cognitive ineptitude as a way of life. Ziegler is still pissed because the cops marched him off when he was pressing his DVDs on the guests at a University of Southern California event. While Katie Couric was receiving an award, he writes, “I was being physically restrained and handcuffed outside for supposedly trespassing on an open campus.” But USC doesn’t have an open campus. I’ve been there. The campus has signs warning that it’s for students and authorized guests only, and that the school reserves the right to haul off anyone who’s present without permission. Nobody bothered me because they didn’t know I was there. I just walked around and looked at the buildings, as opposed to chasing elbows and trying to flog the real truth about Katie Couric’s newspaper question. (It seems that Palin sensed she was being set up but was too mannerly to say so, and therefore…)

Even if Ziegler didn’t notice the signs, he could at least notice his own prose. Because there, just 34 words after the “supposedly trespassing” remark, we get “The LAPD gave me the option of leaving or being charged, so I left.” Charged with what? If he actually hadn’t committed an offense, if The Man was just trying to squash free speech, then how could the police threaten him with charges? But he can’t match the two bits of prose together, so the question doesn’t occur to him. You might as well ask your dog what it thought of the tree it saw three blocks ago.

To picket Katie Couric is silly. To picket Katie Couric and, a few months later, to picket David Letterman shows a weakness for unintended comedy. But to picket David Letterman even after the person you’re defending has lost interest—that, as the belle-lettrists used to say, is sublime. Letterman had made a pregnancy joke about the wrong Palin daughter, one who on investigation turned out to be 14. An uproar ensued, with the usual consequences. “Basically,” Ziegler tells us, “Letterman offered a series of classic ‘non-apology apologies’ on his show.” While this went on, Ziegler flew to New York, gathered supporters, told TV journalists he was going to bring the fury. Then Palin accepted one of the apologies. Ziegler hit the streets to find that the story had died, that he had no cause left. Had Palin bothered to warn him? No. Did the lack of a cause keep him from protesting? Oddly, no. He arrived at the Ed Sullivan Theater and proceeded to feel very foolish. “I was hung out to dry,” he tells us.
I’ll admit that Ziegler, like Palin, has a nasty streak (his key talking point against Letterman was “perv”), and they both live for the massive chips they maintain on their shoulders. But here’s a difference: She makes a fool of herself when she opens her mouth, he does it when he takes a stand. Ziegler might be mistaken for noble in a Don Quixote sort of way. Not Palin. Ziegler is the sort who gets hung out to dry, his ex-heroine is the sort who does the hanging. And that’s the moral of “The Sarah Palin I Know.”