Media an Avalanche of Lefty Hate

Not even pretending anymore. 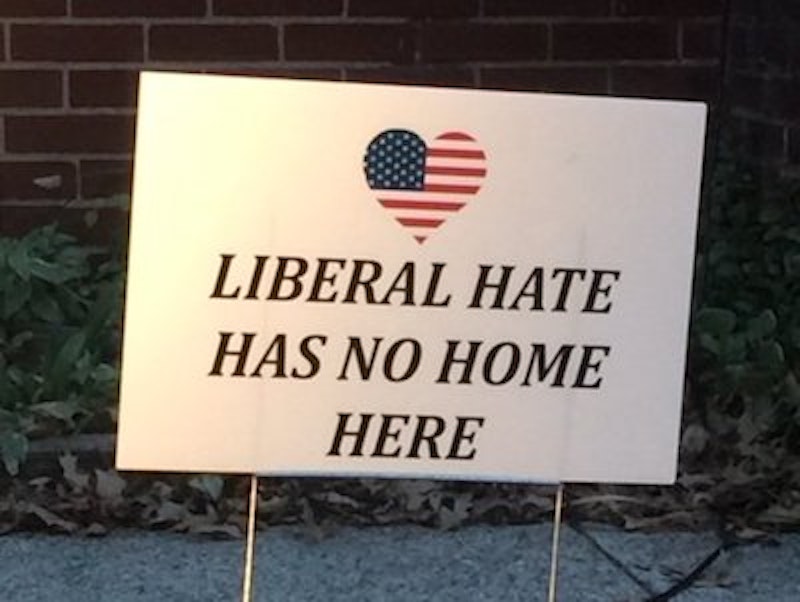 Left-liberalism and war are blending together effortlessly today, the worst of both worlds. Anything Trump seems to be against, liberals mindlessly favor. If he spars with intelligence agencies, suddenly they love intelligence agencies. If he wants troops out of Syria, liberals want them in. But liberals can’t stop there.

Bette Midler, as disingenuously as a terrorist or Mafia leader, tweets, “I DO NOT promote violence but… Rand Paul says the Kurds are being ‘ingrates’ for taking their frustrations out on US troops. Which is a good reminder for us all to be more grateful for the neighbor who beat the shit out of Rand Paul.”

Think of the decades we wasted pretending liberal celebrities meant well and just got the details (about economics, science, constitutional law, manners, everything) wrong. But unmasked by Twitter, they turn out to be exactly the arrogant, violent psychotics some of us always feared. And not too bright, either.

But I don’t generally fault performers themselves for political missteps. Most try in their clumsy way to keep telling jokes, juggling balls, driving cars, waving pretend guns around, singing, or whatever their normal jobs consist of. No shame in that. Valuable work. Entertaining.

It’s the big, corporate, ostensibly serious, thought-out journalistic decisions that are really alarming and show a systematic, propagandistic bias in which truth barely plays a role anymore. Numerous examples just from the past several weeks:

After a few years of feebly pretending that only conspiracy theorists believe in a sinister “Deep State” out to subvert democracy and manipulate society, The New York Times seems to have forgotten their own party line and ran an editorial that was summarized in their official Twitter feed: “The deep state is alive and well, composed of patriotic public servants. Their aim is not to bring down President Trump out of personal or political animus but to rescue the Republic from his excesses, says ‪@mcottle.”

This should be regarded as one of the most alarming and undemocratic developments in the history of the nation, but Trump bad, so we get a Times piece about the Deep State headlined “They Are Not the Resistance. They Are Not a Cabal. They Are Public Servants.” The Times behaving like intelligence-sector lackeys should be no surprise, though, to long-time readers of, say, Carl Bernstein, who years ago called the Times one of the CIA’s most reliable media servants.

Instead of wide-ranging debate in mainstream media these days, the best we can hope for is the occasional muddled messaging, the left tripping over its own contradictions. Thus smashing terrorists is good, but Trump bad, so we end up with the weird, half-assed attempts to make the recently deceased ISIS leader al-Baghdadi sound almost pleasant. Or is he recently deceased? The Russians don’t think so. Perhaps the Russians can’t be trusted—but then, wouldn’t an intellectually honest press at least pause to note that the Russians must not be too tight with Trump if they’re raining on his biggest-ever terrorist-killing parade?

No time to think about that contradiction, though, nor about anything else. On to the next urgent media eruption.

CNN, which knows better than anyone that war is good for ratings, sounded upset to see Trump “stands down” in Syria, as their exhaustingly propagandistic lower-third banners put it. But if CNN and the establishment want us to rally to the Kurds’ cause, might a good place to start be telling the Kurds to stop vowing to use human shields if they are attacked by the Turks? Might it also be wise for the Kurds to avoid attacking U.S. troops? Is the establishment sure this is a faction worth us fighting for, if that's really what CNN liberals want?

So urgent is the Kurdish cause suddenly, and so inconsequential the truth, that strange reporter Kurt Eichenwald posted images of 1983 earthquake survivors, claiming they were injured Kurds doomed by Trump’s retreat. Not to be outdone, ABC News used Kentucky gun show footage from 2017 as footage of beset Kurds, with the banner “SLAUGHTER IN SYRIA.”

MSNBC’s Chuck Todd, for his part, flipped out recently while interviewing a senator and sputtered, “Do you not trust the FBI? You don’t trust the CIA?” Unthinkable! Meanwhile, the Times just did a glowing piece about a new Apple streaming-TV series starring Brie Larson—not long after she deployed a favorite weirdo-elite symbol by doing a whole movie about a “Unicorn Store”—this new one about a real-life CIA agent who met a member of the Kennedy family at Burning Man and married him, before working to bring peace to the world. Watch as the elite’s favorite icons blend with subversive subcultures before your eyes!

The media bias in favor of hip-yet-elite centers of power isn’t really surprising, or at all secret anymore. The recent hidden-camera expose of CNN by James O’Keefe’s Project Veritas showed a CNN staffer recalling how someone there wept in the hall the night Trump was elected, dangerous renegade outside that he is by their reckoning. I used to work at ABC News and have since heard that at ABC there was not only weeping in the halls that night but the abandonment of the overnight broadcast’s control room by the special-broadcast NightLine executive producer, who said she could barely “process” what was going on and had to retreat to the “meditation room” for the duration.

This is your objective media, and they give each other Awards for Courageous Coverage while behaving like this. (Actual, full-fledged spies seem less slimy by comparison, and I really enjoyed Sacha Baron Cohen playing a real-life one in the miniseries The Spy.) Spinning is just what they do now, and it shows not just in wartime propaganda efforts but things like the Times’ ridiculous recent headline “A Racist Attack Shows How Whiteness Evolves”—about two Indians attacking black people. Sure, blame whites, whatever. Villain of the day, make up whatever you like, who cares, etc. It’s all going to Hell anyway.

Or, if the future is to be any better, I’ll have to hope that at least once in a while the media create something like the new pro-free-speech documentary No Safe Spaces about combating political bias where it often starts: on college campuses. All is not lost, and there are still campuses like King’s College in New York City where you can expect things like a few days of guest lectures by libertarian economists affiliated with the Ludwig von Mises Institute, as I witnessed there last month.

Surely by now, the messages from the mainstream have become so predictable and tiresome, there must be creeping fear even among the big news execs and college administrators that they’re creating a vast appetite for an alternative, any alternative. Bombard us with propaganda long enough and instead of shouting back at the screen, we might finally get bored enough to change the channel, the one thing the media fears.