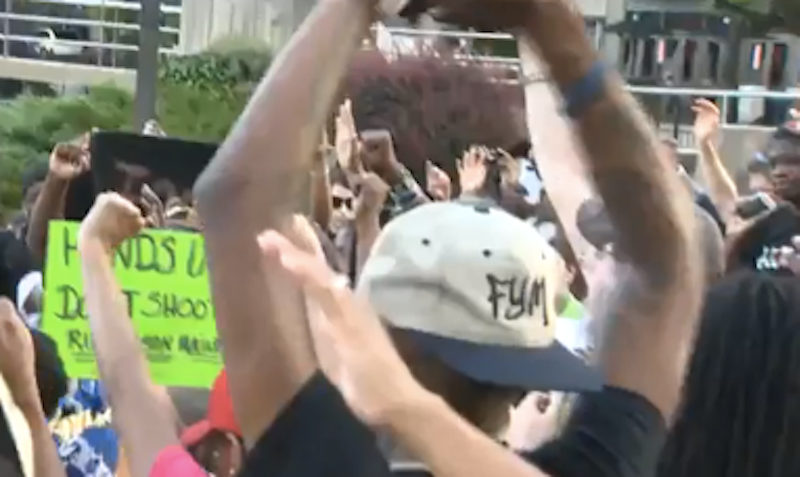 What a week. The video out of Ferguson, MO Wednesday night was the most profoundly disturbing thing I’ve scene since the Twin Towers burning. Our own government arming incompetent St. Louis County police with more violent toys than soldiers in the Middle East had. All those wannabe storm troopers are gum on the bottom of my shoe, the lowest of the low, who would’ve become serial killers if they didn’t have a sanctioned outlet. Responsible people in the military saw what was happening and said it looked as though they were “playing army.” I was up all night re-tweeting and talking to everyone I could about what I saw and what was being censored on all major media and Facebook. Twitter was the only place to find breaking information from the ground in a war zone.

I was shocked and saddened to hear how many of my friends and acquaintances here in Baltimore were completely unaware of the insane paramilitary occupation of Ferguson—many didn’t even know about Mike Brown’s murder. But man, what a difference a day makes. Running on fumes, I took a nap at two p.m. and overslept, freaking out when I came to and saw 6:40 on my phone. Missed the initial meeting at the Circuit Courthouse on Calvert St. by over an hour, but I had time and jetted down to Harborplace for the National Moment of Silence. Luckily, the rally continued until just before 10 p.m., and we marched from the Inner Harbor back to City Hall, shouting “HANDS UP/DON’T SHOOT!” as we walked past Hooters and the World Trade Center. Remarkably, the police cleared lanes and entire streets for us to march. No brutality or roughhousing of any kind.

Demanding peace isn’t Pollyanna pap. Not all cops are bad people: that’s just as stupid as saying all cops are always right. In a fragmented and personally tailored world, even the presence of tanks and untrained officers using absurdly excessive force and terrorizing peaceful protestors in suburban neighborhoods isn’t enough to bring thousands out into the streets. Three thousand people gathered in Manhattan’s Times Square. There are a million excuses not to march: for one thing, it’s hard to demonstrate when you don’t even know what happened or how surreal and severe it was. Almost all major media outlets waited until the dust cleared yesterday to start talking about Ferguson as more than a footnote. If you didn’t know and weren’t on Twitter, you wouldn’t have seen the dragon fruit colored holes in stomachs the size of baseballs. You wouldn’t have heard the horrifying sound canons the hick storm troopers unleashed before lobbing grenades and tear gas at righteously indignant but peaceful protestors. That hellish sound has kept me up the past two nights. I don’t want to live in a bad sci-fi movie. If you didn’t watch that live stream, you also would’ve been spared the torrent of vile racist garbage in the comments, idiots throwing slurs and dismissing entirely the role of race in this whole tragedy. Allies of the Bundy Ranch in Nevada aimed sniper rifles at federal agents and the feds… walked away. If you don’t see what that means, then you’re just not paying attention.