Seeding a presidential run on the taxpayers’ dime. 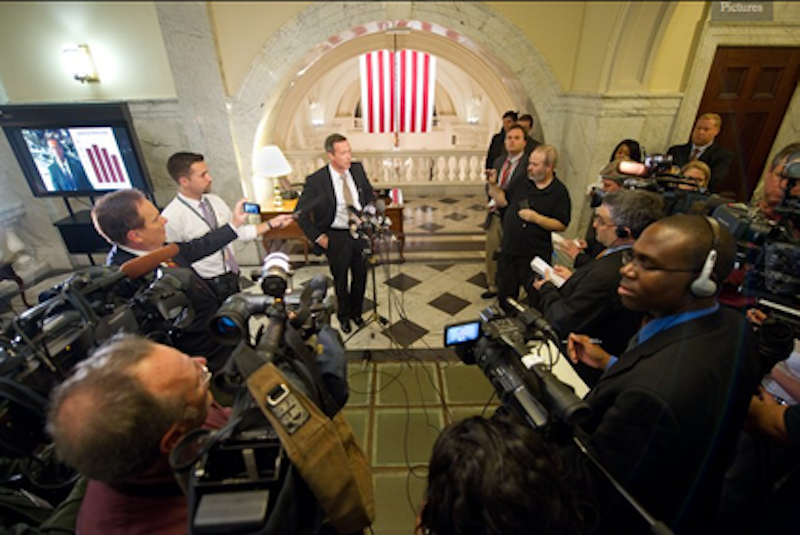 The governor’s press office in the Maryland State House is the message center where politics and policy converge and become tweets, posts, news releases, speeches and sound bites. Add to these a new wrinkle: footnotes to annotate the governor’s state of the state address.

Sixty years ago, under Republican Gov. Theodore R. McKeldin (1950-59), the press office was a one-man shop operated by the courtly Al Quinn, a former print reporter who later returned to his journalistic roots as a political reporter for WBAL-TV in Baltimore.

Today, O’Malley’s communications office is a sprawling behemoth of at least a dozen redundant and overlapping titles (excluding secretaries) whose individual salaries range into the high six figures at a cost to the taxpayers of hundreds of thousands a year. They do not include the three press aides serving the lieutenant governor and one assigned to the governor’s wife. It is a press office fit for a president.

It might be argued that a dozen mouthpieces is a contemporary necessity because government is an amorphous collection of loose ends and Maryland’s constituency has grown more complex as well as diverse. Even more compelling, communications techniques and venues have developed beyond the thinkable of a half century ago to the point where the news cycle is as rapid as the speed of light and as brief as the latest tweet.

But there are far fewer major daily newspapers covering Maryland than the half dozen of the 50s and 60s and the number of television stations is the same. Bloggers and websites do not receive the same attention and cachet as the “legitimate press.”

Students of human motivation, though, would counter that O’Malley is merely primping for a presidential run (or a heartbeat short) on the taxpayers’ dime by building a massive communications network with national, and now ethnic, implications to fill out the boxes on the flow-chart of a nascent presidential campaign. Or else why bulk up the communications team with less than two years remaining in the governor’s office?

Read into it what you will, but O’Malley has just hired a Latino director of strategic communications with important links to two powerful national Democratic constituencies. Teddy Davis, the new hire, has served as press secretary to Los Angeles Mayor Antonio Villaraigosa and was also a national spokesman for the Service Employees International Union as well as an Emmy Award winner at ABC News. The appointment was first reported in The Washington Post. Davis has cachet with the huge and all-important Hispanic community as well as one of the more aggressive labor organizations that is surviving the sharp decline in union membership.

So just what, it is fair to ask, do all of these people do other than, perhaps, talk to each other? The tab for the press office staff began to grow measurably under former Gov. Robert L. Ehrlich Jr., who followed the Republican formula of hiring outside professionals from the advertising industry as well as a couple of old hands from the media pool.

Ehrlich was the first to have an expanded press office under communications director, Paul Shurick, as well as a press secretary, Greg Missoni. And to those he added a creative director to stage-manage public events. Shurick had been press secretary for Gov. William Donald Schaefer (D) as well as an Ehrlich campaign aide and Missoni had been a television producer. Missoni’s deputy was Henry Caldwell and Ehrlich’s speechwriter was Richard Cross (although Ehrlich once claimed to have written many of his own speeches.) The requisite photographers were also on board.

Gov. Spiro T. Agnew’s (R) 1966 campaign was the first truly modern campaign in Maryland. Agnew, as a candidate for governor, and later an elected official, employed what were then evolving as modern campaign techniques such as a political advertising agency, professional polling, saturation television and radio commercials and staged appearances. Agnew early on recognized the growing importance of television in politics.

Agnew also hired, as a State House first, a full-time speechwriter/researcher, Cynthia Rosenwald. Agnew’s press office originated the news conference transcript, a protective device and checklist against what he considered misquotes. When Agnew left for Washington and the vice presidency in 1969, he took the three aides with him.

Gov. Marvin Mandel (D) succeeded Agnew in a great hurry and flurry. He had pre-arranged to hire me as his press secretary directly from the State House press room and as political reporter for The News American. As my deputy, I later hired Thom Burden who had succeeded me at the paper and in the State House press room. That was in back in the days when the tools of the trade were manual typewriters and rotary dial telephones.

Suffice it to say, however immodestly, that Burden and I, along with three secretaries and occasional part-time help, performed all of the duties and assignments—as did many of our predecessors and successors—that are now spread out among O’Malley’s dozen communications staffers: keeping the public informed through the press; making certain rambunctious reporters were busy and content; and keeping the boss’s name out front. And above all, if the buck stops at the governor’s desk, try to deflect the buck before it arrives.

In addition to press office duties, in 1974 I assumed the additional responsibilities of chief of staff. The major additions to the press operation during the Mandel years was a staff photographer, Lee Troutner, and the installation of the lighting and sound system to accommodate the growing corps of television reporters at weekly news conferences in the governor’s reception room as well as the use of recorded broadcast feeds to radio stations across the state. Burden succeeded to the top job upon my departure in 1977.

Gov. Harry R. Hughes (D) (1979-1987) began his administration with Gene Oishi, of The Baltimore Sun, as his press secretary. Oishi was uncomfortable with the career change and soon departed. He was succeeded by Lou Panos, of The Evening Sun, who became a victim of the unfavorable press coverage that accompanied the savings and loan scandal of the era. Hughes recruited Jack Eddinger, a veteran reporter and City Hall press secretary, to clean up the mess. Eddinger rearranged the furniture and brought in Hirsh Goldberg, an advertising executive who had been McKeldin’s City Hall press secretary, to finish out Hughes’ term.

William Donald Schaefer (1987-1995) began his fitful State House years, after burning through at least a half dozen press secretaries as mayor of Baltimore, with Robert Douglas, an attorney and a veteran of both print and television journalism, heading the press office, with Sue Pimintel [sic] as press secretary and Mike Golden, a radio reporter, as the assistant press secretary.

Golden departed after six months for the top press office job in the State Health Department and was succeeded by Mac McClellan [sic] of The Evening Sun. Douglas called it quits after two years to begin his law career. Douglas was succeeded by Shurick as Schaefer’s spokesman. Golden later rejoined Schaefer as spokesman in the comptroller’s office. Schaefer also had a habit of conscripting personnel from other agencies so they wouldn’t be charged to the governor’s budget.

Gov. Parris Glendening (D) (1995-2003) had a tough time hanging on to press secretaries. He began with John Freece, The Sun’s State House reporter, who soon tired of the job and moved on to work on environmental matters. Glendening’s search for a female press secretary led to Raquel Guillory (who now works for O’Malley) and she soon left and was replaced by Mike Morrill as communications director with Judy Scioli in the understudy slot as press secretary. Scioli was eventually eased out and banished to the Maryland Port Authority. Glendening expanded the press office by adding a second photographer.

Over his seven years in office, O’Malley has lost several of his communications directors to the private sector, most recently Rick Abruzzezee who departed for a lobbying firm. Another, Steve Kearny, heads a communications firm that handles O’Malley’s campaigns as well as the governor’s advocacy work such as casino gambling and other ballot questions. Soon Kearney may be tested at the national level.

Yet government is no more complex today than it was a half century ago. It’s bigger and a lot costlier, true, but the questions and problems are nevertheless essentially the same. If anything, the mood is quieter, devoid the social upheaval and constituent demands of the 60s and 70s. In today’s wireless world, there is little eyeball-to-eyeball contact between reporters and communications staffers. It’s as simple and ethereal as a reporter’s quick question tapped out on an electronic device of whatever nomenclature, a contrived response fired back and little or no spontaneity. It takes12 high-priced people to accomplish that?

—Frank A. DeFilippo was press secretary to Maryland Gov. Marvin Mandel from 1969-1977.