It's Hard to Hire Workers You Hate

American businesses are crippled by their distrust of labor. 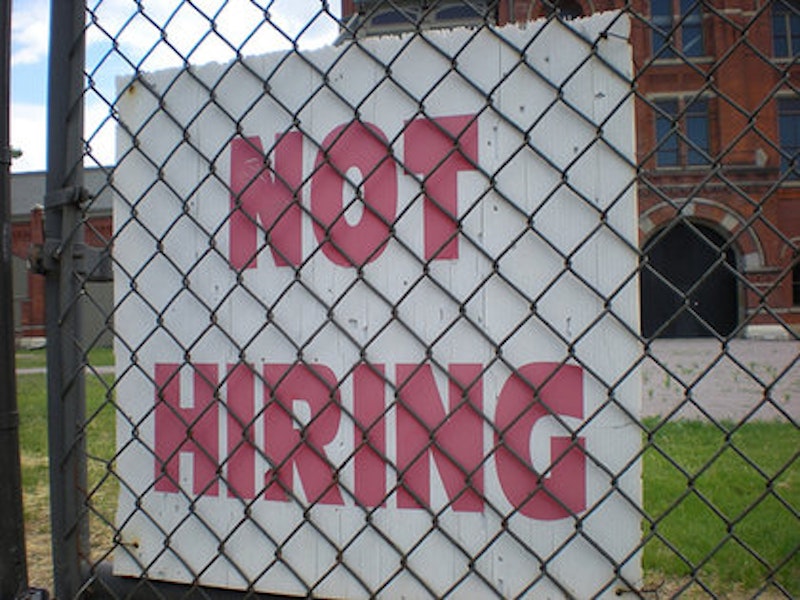 Joblessness, we're often told, is the fault of the jobless. They aren't well enough trained; they lack the right skills; they haven't been to college. If we want more people employed, therefore, we need to focus on retooling those potential employees—get them into training programs, send them back to school, and actualize them to impact the fast-moving corporate interconnectivity of the 21st century.

A lengthy essay by Trey Popp in the Penn Gazette calls this conventional wisdom into question. According to Popp, American workers are not the problem; American businesses are. Specifically, employers in the US tend to treat prospective employees like widgets rather than humans.

Topp quotes Wharton School of business professor Peter Cappelli as saying that employers have "a Home Depot view of the hiring process, in which filling a job vacancy is seen as akin to replacing a part in a washing machine." The problem, Cappelli says, is that "unlike a machine part, no perfect fit exists between applicants and job requirements." Companies can achieve the same end in many different ways, depending on the people they have. In short, the job fits the person, rather than the person fitting the job. By looking for the perfect cog, employers rule out many qualified prospective employers who might bring unexpected skills and talents to their position, but who don't happen to, say, be familiar with the exact software package being used, or who have only five years experience herding caribou in the Yukon rather than 10 years experience herding yak in Mongolia.

Cappelli argues that employers' flawed conceptual approach has been exacerbated by software that automatically screens out people who don't fit particular criteria, as well as by the decimation of human resources departments. I have no doubt that he's correct. I do wonder, though, what is behind the flawed conceptual approach in the first place. Why are American employers (as opposed to Europeans) so bad at the hiring process? Why, as Cappelli says, do they even, over the past 50 years, seem to have gotten worse at it, rather than better?

I don't know the answer for sure, but I've got a theory. I think US employers are bad at hiring employees because they hate them, or, if you prefer, because the US has long had a fraught relationship with its laborers. Thus, corporate America's long and largely successful war against unions; the battle cry of right-to-work; and the recent assault on public sector collective bargaining. Also, the conviction that the problem with schools is not inadequate funding or widespread administrative confusion, but evil, greedy, lazy teachers.

And, finally, the problems that Cappelli talks about. Employers look for widgets rather than humans because they think of their employees as widgets rather than humans. In fact, Cappelli argues, American companies often tend to look at employees not just as widgets, but as mostly unnecessary widgets, to be employed only with great reluctance and much resentment. For many employers, according to Cappelli, their business strategy basically comes down to "Let’s just cut staff until we notice blood." In most cases, hiring isn't done because the company decides there's a need to fill a position, but rather because other employees are clamoring so much about overwork that the employer has to do something or face losing the staff it already has. Management, then, often seems to see employees not as team members, nor even as a resource, but rather as basically useless freeloaders, who, if they were doing their jobs correctly, could be dispensed with altogether.

The irony is that the general assault on labor in the US and the general devaluation of employees is justified by the rhetoric of efficiency. Unions are inefficient; too many workers are inefficient; more mandatory paid leave will cripple the US economy, and so on.  And yet, it turns out that constantly kicking your employees is not actually good for business. If you insist your workers are neither human nor necessary, it becomes difficult to hire necessary humans. A capitalism that hates workers is a capitalism that's going to have trouble getting any work done.