Lincoln Chafee Would Be a Mistake for the Libertarian Party

He’d run for president at the expense of some libertarian principles. 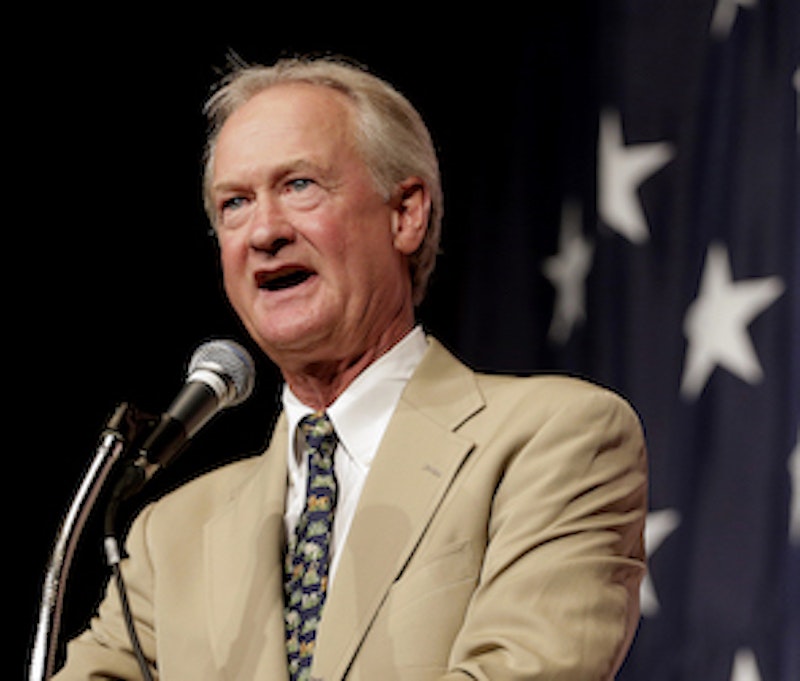 In 2020, the Libertarian Party might have a well-qualified presidential nominee—at the expense of libertarian principles.

Earlier this year, Lincoln Chafee, a former Rhode Island Governor and U.S. Senator, joined the Libertarian Party, his fourth political affiliation since 2007: first Republican, then independent, then Democrat and now a member of the LP. Chafee garnered interest from the party's members almost immediately and in August, stated he is “open” to running for president on the 2020 Libertarian Party ticket.

Appearing on The Sharpe Way in September, he said he’ll likely be at their national convention. Unlike the Republican and Democratic Parties, the Libertarian Party doesn’t hold state-by-state primaries/caucuses to appoint their nominee. Rather, a group of delegates at their convention selects both the presidential and vice presidential nominee (the candidate doesn't pick their running mate).

Given Chafee's resume and the Libertarian Party's history of not picking the most libertarian people to run on their ticket—like former U.S. Rep. Bob Barr (R-GA) in 2008 and former New Mexico Republican Governor Gary Johnson in 2012 and 2016 (Johnson doesn’t even properly define libertarian properly)—it wouldn’t be surprising to see Chafee earn the nomination. That's not necessarily good.

Before he registered with the party, would the word "libertarian" ever be used to describe Lincoln Chafee? Probably not. I couldn’t find any instances of it. Chafee’s a textbook example of a liberal Republican or Yankee Republican. The terms describe many former northeast Senators such as himself, Jim Jeffords of Vermont and Arlen Specter of Pennsylvania; all three eventually left the Republican Party to work with the Democrats. Republican Governors like Phil Scott of Vermont and anti-vape crusader Charlie Baker of Massachusetts fit the description. RINOs.

Being culturally liberal and fiscally disciplined doesn’t make these types of politicians libertarians. Chafee, in some ways, favors less government now than he did in his time in office, but he’s still a flawed candidate. By fiscally disciplined, that doesn’t mean people like Chafee are in favor of massive spending and tax cuts. Rather, he opposed the George W. Bush tax cuts because they would expand the deficit—a respectable opinion. However, he’s also not an advocate of cutting government spending. For example, he’s in favor of single-payer healthcare, even though there are universal models—like those of Singapore and Switzerland—which wouldn’t eliminate private insurance and are respected by some on the Right (although the Swiss individual mandate isn’t so libertarian).

Chafee, who lived in Canada for seven years of his adult life (where he worked as a farrier), said he’s not a fan of private insurance. His solution puts him to the left of most Democrats on the issue—which shouldn’t be a shock considering he ran for the presidential nomination in 2016. He also endorsed big government spender Barack Obama in 2008 and 2012. Since he tends to switch parties a lot, one has to wonder if he could be a reliable ally for the LP.

Surely, there are many policies where Chafee and libertarians can find common ground. He voted against the Iraq War. He admitted his past support for the PATRIOT Act was a mistake. He’d pardon Edward Snowden. He's anti-death penalty. He's pro-choice. He supports free trade. He scrapped Rhode Island's e-verify policy. He likes school choice. He opposed corporate welfare for Curt Schilling's stupid video game company. And he favors drug liberalization (now). However, it's unclear if libertarians will be able to forgive him for having a lower NRA grade than Bernie Sanders (D- versus F) or for wanting more federal spending on education.

In 2020, the Libertarian Party presidential nominee won’t be running to win the presidency but rather to spread ideas and win over as many people as possible. This means the party has untapped potential to run on any fresh, new ideas they want. Not only is he new to the party and therefore might not have the best grasp on it, but it's unclear where his ideas stand out. He deserves credit on one issue though: measurements. Chafee believes the United States should join most of the world and use the metric system. Whether or not one agrees, it's a thought-provoking discussion.