Elizabeth Warren Has a Plan If You're Worth $50 Million

The wealth tax is aimed at a tiny percentage of Americans. 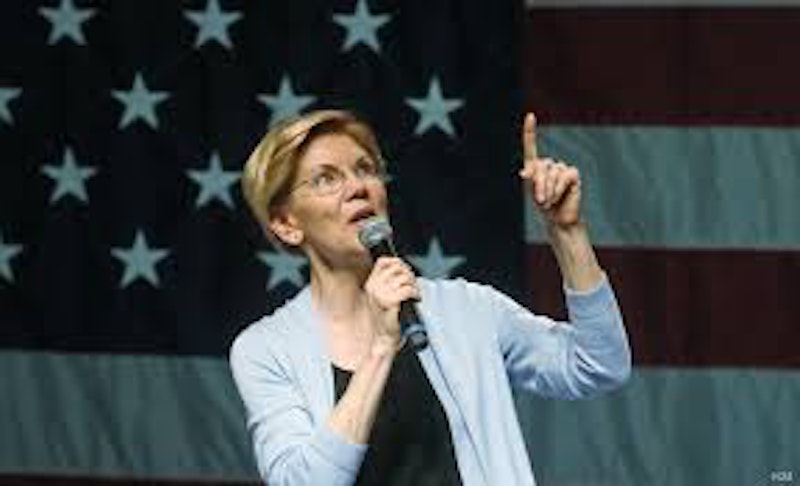 Presidential candidate Elizabeth Warren has a plan for everything, she brags. But those plans don't come cheap so she's proposing a wealth tax—an all-encompassing version of the property tax—to raise cash. Wealth above $50 million will be taxed at two percent, and the rate moves to three percent on billion-dollar fortunes. Forbes is dubious about the idea, uncertain whether it's even constitutional, while The New Yorker loves it. Jeff Bezos, who'd be on the hook for $7 billion a year, has yet to weigh in.

The Warren plan, which she calls the "Ultra-Millionaire Tax," reflects the teachings of French economist Thomas Piketty, author of Capital in the Twenty-First Century, a cautionary tale about wealth inequality. It would collect about four times more than Ocasio-Cortez's income tax plan, with the burden falling squarely on those without who could lose three $8 million vacation homes but still keep their fourth one in The Hamptons.

Bernie Sanders has no compunctions about telling the middle class he'll raise their taxes. Social Democrats look at paying taxes for extra government services as a badge of honor. Warren, who arrived at her socialist-leaning views late in her political career, doesn't have the stomach for that old-style "everyone pitches in for the greater good" approach.

"Soak the rich" is a reliable populist chant, especially among the Democrats' base, a group that's taken a sharp turn to the left. One could argue that this is a return to the party's roots rather than a deviation outwards to uncharted territory. Harry Truman supported single-payer healthcare, Daniel Patrick Moynihan was for a universal basic income, and both of them were considered moderate Democrats in their time. It was a different party then, long before any Democrat talked of triangulation, or thought of pleasing Silicon Valley tech moguls and Wall Street financiers.

Warren was pleased in the presidential primary debate when Don Lemon asked her fellow candidate John Delaney, who's worth $65 million, what he thought about the wealth tax, and it typified this latest iteration of the Democratic Party. She was saying, "I can't wait to get my hands on your money, as you're the beneficiary of a system all Americans helped create and now it's time for you to give some of your money back to those people because they need it to maintain their health." Whatever you think of that, nobody can accuse Warren of trying to disguise her intentions. I'd be shocked if a clip of that doesn't get recirculated if we get Warren vs. Trump, because in three seconds it provides a perfect illustration of conservatives' worst fears about the confiscatory nature of progressive tax policy.

But why would the key voters in Wisconsin, Michigan, and Pennsylvania be put off by the government putting elites through the toll booth while they struggle to make it through the month? Warren's smart to set the threshold at $50 million. How much empathy is there for about those 75,000 households? Still, there are potential Democratic voters who are uncomfortable about what they consider government overreach, even if the government assures them it's acting like Robin Hood to help them. Ask any Republican strategist.

"But this is class warfare!" scream Fox News entertainers like Sean Hannity, who has a $200 million fortune. But hasn't the class war already been fought, and the common people defeated, when income disparity's been increasing for three decades? Here are the victorious side's numbers: The top one percent now average over 39 times more income than the bottom 90 percent; the top one-tenth of a percent earn over 188 times more than the bottom 90 percent. A meritocracy that spreads rewards unevenly is one thing, but a plutocracy's another matter altogether.

There's nothing plutocrats hate more than taxes, and they've got the means to avoid them. Thus it's hardly a surprise that wealth taxes haven't been a success in Europe, where 12 nations had them in 1990, but only Norway, Switzerland, and Spain do today. France saw an exodus of 42,000 millionaires between 2000 and 2012. But UC Berkeley economist Gabriel Zucman, who helped shape Warren's wealth tax, says it was specifically designed to avoid the flaws contributing to the European failures, which included setting the wealth bar too low. Any American contemplating joining an "exodus" by renouncing their citizenship would face an "exit tax" of 40 percent on assets in excess of $50 million under Warren's tax code.

Warren's closed up the European loopholes on paper, but in reality it’ll take substantial government resources to place a valuation on all the assets to be taxed. Enforcement costs will be steep, but there are no easy solutions.

Piketty has theorized that because the rate of return on capital exceeds the rate of economic growth, the middle class will always be at a disadvantage. After 30 years of wealth shepherded to the top, perhaps even some Republicans can admit that it's time for some remedial action. A new poll found that a majority of them support Warren's tax plan.

The only way to find out if the Ultra-Millionaire Tax would improve the nation is to try it out. It may not be "fair" to tax the upper echelon of the investing class on money they've already been taxed on (rejiggering the inheritance tax would be fairer), but they're still the biggest beneficiaries of the current economic system. If the wealth tax fails, then nobody vulnerable will have been hurt.