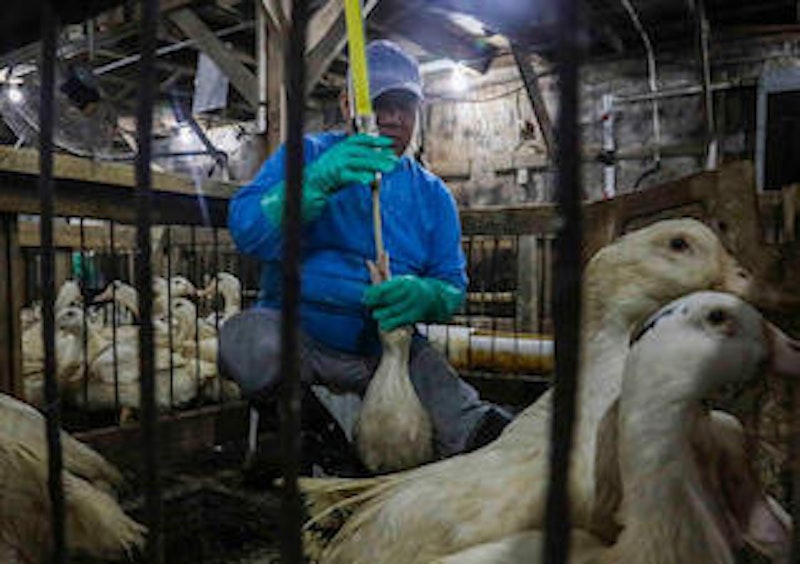 The delicacy foie gras has had a long history in New York City. Lutèce, once a storied bastion of grand luxe dining back when French cuisine reigned supreme in the 1970s, would serve it seared, accompanied with dark chocolate sauce and bitter orange marmalade. Le Cirque made a spectacular ravioli dish out of the gourmet item. Foie gras ("fatty liver" in French) had a long run, but the NYC City Council's decided it's time to close the curtain on the fine-dining favorite with a ban on its sale in the city limits. Politicians have determined its production is cruel to animals—ducks, specifically—which any member of PETA will assure you is true, but they won't tell you the whole story.

Technically, the ban pertains to the force-feeding of ducks (or geese), known as "gavage," to produce an engorged liver that tastes so unctuously good, not foie gras itself. But farmers haven't had any success using less invasive feeding techniques. When the ancient Egyptians domesticated geese, they discovered that the liver engorgement process happened naturally when the fowls ingested copious amounts of grain in preparation for migration. They began force-feeding the birds, and the practice spread, eventually making its way to France, which would become the world's largest producer of foie gras. Foie gras is to France what caviar is to Russia.

The photographs of ducks with long feeding tubes rammed down their throats create a disturbing image in the mind that foie gras producers and aficionados struggle to counter. The late Anthony Bourdain, an avid defender of culinary tradition, once explored the issue on his TV show, No Reservations. He drove up from New York to Sullivan County's Hudson Valley Foie Gras farm, where he learned about the three-week process of force-feeding, which takes place in a matter of seconds with no visible signs of distress from the bird, unlike what would happen with a human. That's because, as a veterinarian explained on camera to the former chef, ducks have no gag reflex—their windpipe, unlike that of mammals, opens up in the center of their tongue. As for the pain that PETA decries, ducks have an esophagus lined with collagen, which is as insensitive as a fingernail.

The vet said that the ducks at Hudson Valley foie gras—which, unlike what activists would have you believe, is a USDA Certified Cage-Free operation—are less stressed, food wise, than their counterparts in the wild. PETA says that foie gras is a "diseased" product because of the swollen liver, but ducks and geese naturally force-feed themselves for two weeks twice a year before migration season.

New York City has serious problems involving the subway, homelessness, and affordable housing for which the city's lawmakers have no solutions. But solving the foie gras "problem" couldn't be simpler—just pass a statute and it disappears! The city's politicians saw an easy win and they went for it, assisted by the fact that there's an element of class warfare involved in NYC ban. The approximately 1000 city restaurants that are serving foie gras are perceived to be selling a luxury product, so the alleged torture of animals is seen as in service of keeping the already pampered sated, doubling the offense.

There's been no reporting on pro-ban politicians having made the same farm visit Bourdain did. Carlina Rivera, the Manhattan councilwoman who sponsored the foie gras law (it will go into effect in three years) said force-feeding birds is "the most inhumane process” in the commercial food industry, although it's doubtful she's looked at the sketchy practices of that industry in any detail. Rivera's a politician seeking approval. As for the 400 employees of those two farms, they're not New York City voters, so their fate isn't her concern.

Some foie gras producers will tell you the ducks line up for their force-feedings, while activists say the birds' livers get so fattened up that they can hardly walk. It's one of those issues, but there's ample evidence that foie gras ducks are better cared for than many commercially-raised chickens. But the "gutless politicians" that Bourdain bemoaned during his farm visit aren't about to mess with people's chicken, so now New York City, culinary capital of the world, will no longer offer one of the culinary world's most prized items.