He has inner-voiced himself into being a spectacle. 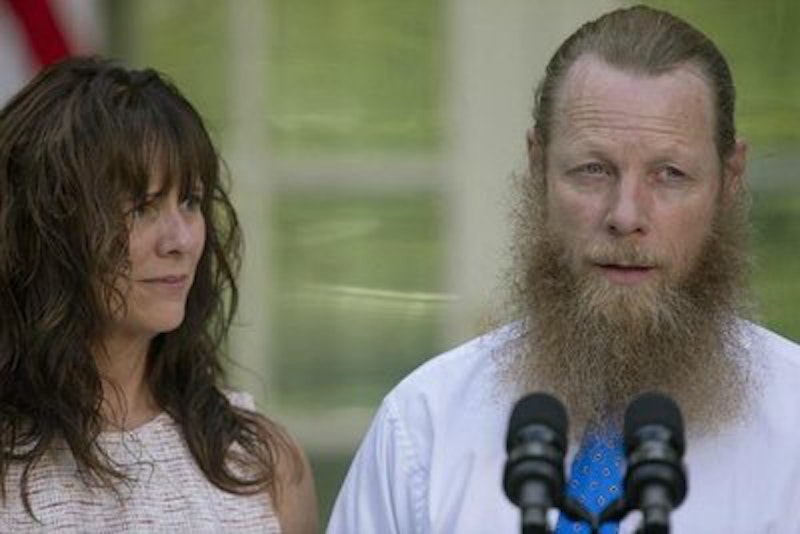 Some people are so American they're crazy. For example, Bowe Bergdahl and his father. That beard, the horrible face-snatch worn by the elder Bergdahl, is the result of self-direction run amok. Mr. Bergdahl swore a vow and he shall keep it: no shaving until his boy is home. He has inner-voiced himself into being a spectacle, and that suits him fine.

Conservatives hate the sight of Mr. Bergdahl and despise his son. The Obama administration enlisted the Bergdahl parents in a feel-good drama about a serviceman. Conservatives, who adore such dramas, tally up the ways that Bergdahl father and son fall short as suitable players: squishy Tweets, ballet lessons, that beard. But that beard is America in action. One man is doing what he thinks right.

For that matter, the Bergdahl son wanted to be a primal frontiersman. “He had a notion he was a survivalist, claimed he knew how to survive with nothing because he grew up in Idaho,” says a fellow recruit. “He had stories of him doing crazy shit out in the woods for weeks in Idaho.” Apparently he got fairly close. Bowe grew up in the mountains, and his parents said he could ride and shoot by the time he was five. He never saw the inside of a school; his father kept him home to read St. Thomas Aquinas and the other great ones.

Conservatives could dream about this man-child, and in fact they did. After Bowe was captured, the more savvy military freaks knew the knock on him (as flake and deserter) from his ex-comrades. But plenty of other conservatives took a look at his lean countenance and authoritative cheekbones and decided that this imprisoned serviceman was their hero. Hence the great crop of reversed Tweets after patriots heard that Bowe was coming home and Obama had sprung him. These are funny, but you can sympathize. A war ought to have a hero, and this war has none. Instead a fellow who might have been a hero, who has the look and the skills and something like the temperament, shuffles forward and he turns out to be a flake.

Bergdahl father and son appear to be lithe, high-performing organisms who are destined never to succeed much in life. They can't get their heads with any man's program, not when it comes to the big things. Mr. Bergdahl (Bob) is a highly intelligent ex-member of the middle class who speaks Pashto and correctly uses the word “effected.” At various times he has humped packages for UPS and Tweeted his thoughts on sharia law versus western democracy. I think you can find people like that up in the mountains, in this case meaning Idaho, the territory Mr. Bergdahl elected to light out to many years ago. There he raised a boy who is a perpetual jumper of fences, a frontier dreamer who wants to wrestle some huge allegiance into his life but doesn't want to get crowded by it.

Finding life too ordinary, Bowe wanted to jump from Idaho to the French Foreign Legion. They turned him down (his background was too odd), so he landed in the U.S. Army. Recruit Bowe buried his nose in the Ranger manual and studied maps of Afghanistan. He wanted a purpose, that's why he had signed up. But his heart was divided. “He wanted to be a mercenary, wanted to be a free gun,” a fellow recruit said. In better times the army might have passed him by or at least kept him from action. But the war had kept dragging on and standards were down. The army would take whomever: morons, ex-cons, ex-druggies and a fellow who was slightly cracked. He was a failed version of a hero: a guy whose drive to greatness wasn't so different from a drive to flake out.

The boy honing himself on his army bunk, studying the terrain and schooling his mind, ought to have added up to something. But all his energies were headed nowhere good, and now we're embarrassed by him. “It was like, this shouldn't be real,” said an officer, thinking back to Bergdahl's disappearance and the scrambling about in search of him. That could be the title for the entire Afghan War and especially for the phase we're in now, the summing up.

In a decade Bowe Bergdahl's name will be a joke on Zombie Simpsons, a throwaway in a series of fake book titles for kids: “... The Manatee and Mr. Gibson, Johnny Stumpapple's Lively Rabbit, Bowe Bergdahl Sees It Through.” But right now he's the man whose parents stand next to the President. If he had got with the program, he might have come home as one more shell-shocked vet. But he had to be a unique doer, a call-his-own-shots individual, so now he's America's returning POW. What a farce, conservatives think, this phony president and his flaky non-hero.

And that beard, it stares at them. Who would grow that thing? As it turns out, an American. But Americans can be a pain in the ass.