Liberalism, Racism, and the White Unconscious

I have a story about when and how it happened and who's to blame. 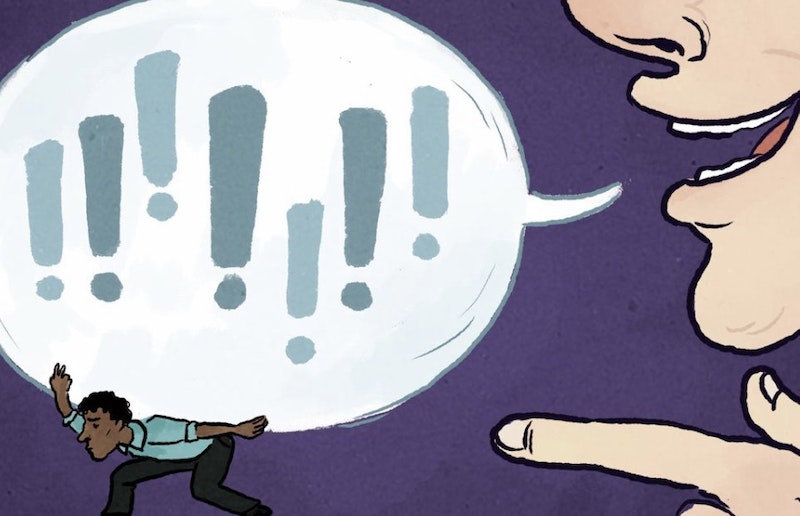 "Unconscious racism" is an elusive concept in some ways, and I see why it irritates people. I-the-white-guy, let's say, issues something that seems to the person at whom it’s tossed to be a "micro-aggression," though I take myself not to be a racist. How can we explain what has happened? Can we say that I’m a racist after all? That's hard when it's hurled at you, and impossible to deny plausibly. It's unconscious, after all; of course I'd deny it. I'd deny it on Dr. Freud's couch just the way I'd deny that deep down I want to kill my father and have sex with my mother, or vice versa. But Dr. Freud knows better. He knew I was Oedipal before I walked in, just the way the person I micro-aggressed against knew I was racist before I opened my mouth. I'm left with no defense, all my explanations of my own behavior undercut or discredited. I don’t have any idea what I want or even what I’m doing and why. Admittedly, that's a bad situation to get into and an impossible to get out of.

However, I think that unconscious racism is real and that most white Americans have a bad case. And I have a story about when and how it happened and who's to blame. First, I blame people who say, "words are powerful" and center their critique of American racism not on substantive exclusions and inequalities, but on preventing people from using the wrong words. The lesson that many white people drew from the civil rights movement was that racism was primarily a system of words and symbols, and that it could be ameliorated by a change of vocabulary or building a nice memorial to MLK. I blame liberals for this. I blame people like Joe Biden and Bill and Hillary Clinton. These are people "without a racist bone in their bodies," who pushed forward and achieved mass racial incarceration and, as they did that, didn’t believe that they were doing it. Now that's unconscious racism.

I'm not sure, on Freud's account, or Jung's for that matter, where "the unconscious" gets its content. But I can describe one psychological mechanism that leads people to lose touch with their own motivations and believe a bunch of bullshit about themselves: people tend to try to preserve their self-esteem at all costs. They believe they’re good people. When a person who believes that he’s a good person does something bad by his own lights, he can respond by confessing, apologizing, doing some sort of penance. Or he can respond that he is, after all, a really good person and so he can’t possibly have done what you're saying he's done, can’t possibly feel what you're saying he feels, and so on.

One way you get to "unconscious" beliefs and desires is by trying to hold on to a certain self-image, and accepting no evidence that undermines it. If a nice white suburban homeowner came to believe that he was a bad person, he'd have to change his life dramatically or plunge into despair. This is really the way a lot of bad people get themselves to do bad things and excuse themselves for having done them: they know they’re good people, so this must not be bad after all.

White people who came through the 1960s civil rights movement learned one thing clearly: that racism was evil, or more to the point, that to be a racist was to be some kind of ignorant Southern cracker. And what a cracker does is hurl racial epithets. You'll be able to recognize a racist immediately by the words he uses. So at the center of being a non-racist is that such words never, ever, cross your lips. Now see if you can prevent them from crossing your mind too, for the mind of a racist is characterized above all by the epithets and stereotypical images that run through it. If the wrong words and symbols don’t cross your mind, or can be immediately crushed as they arise, then you just can’t be a racist. And that's good, because racists are bad people and you’re a good person. Meanwhile, you might cross the street in fear when you see a black man. You might want your kids to go to good schools, and that happens to mean mostly-white schools in a mostly-white neighborhood. You might picture the black neighborhood nearby as a nest of crime and drugs and ignorance. It's not their fault of course, sort of.

A racist social structure can persist even in a situation where no one, or just a few vestigial (and now refreshingly honest) conscious racists, uses the wrong words, even in their own heads. Everyone’s trying to hold on to their self-image and the benefits of the racial power structure. They spend their days congratulating themselves on how progressive they are, as the racial disparities in every social measure from income to incarceration rates to educational disparities to policing nightmares just continues.

By the 1990s the US had reached the bizarre point at which almost no one considered themselves racists, but which was systemically racist in every respect: a kind of collective hallucination among white people. We took ourselves to have basically solved the race problem, because nobody talked wrong. That's why someone like Mike Pence or Bill Barr can look at a camera and say that American can’t be systemically racist; even they’ve learned to talk right. But yip-yap is a lot easier to fix than wealth disparities or city school systems.

I'll bet that Central Park Karen, deep down, was and even is sure that she doesn’t have a racist bone in her body. One way you can tell that she's not a racist is that when she called the cops she described the birdwatcher she was going to accuse of assault as an "African-American." Congrats, really.

I blame speech repression for unconscious racism. The idea is that representations create reality: if you get rid of all the representations of x, you've gotten rid of x. The history of unconscious racism shows that's false. We all know this already, and surely we all often use words to disguise our own motivations and actions. Words can construct ideological fictions, as well as to some extent motivate real changes. And people can believe an ideological fiction, especially when it enhances their self-esteem. Joe Biden and Bill Clinton did believe it, even as they concretely endorsed severe policing and mass incarceration and did little to ameliorate any concrete inequalities.

By the 2000s, we needed an explanation of continuing inequality in a society that appeared non-racist. A lot of white people thought the only possible explanation was black "dysfunction" or a debased black culture. They blamed black dads or hip-hop artists. But they found ways to say that without saying it, and to keep locking up black dads and hip-hop artists. They smiled in your face or even spoke at your church and all the time they were gearing up to put a knee on your neck or throw you in the clink for a decade.

Keep focusing on bad statues, flags, and words rather than concrete inequalities and you’ll create a world in which the racism is both undetectable and omnipresent. It might seem obvious to you that a world with no racist words or symbols would be a less or non-racist world. It's obvious to me that it could easily be an extremely racist world in which the racism can’t even be expressed and so can’t be addressed. You'll be left to detect microaggressions in an unequal whole society. Get all the microaggressions deleted and you'll just face the same oppression, now just a bit more obscured. By controlling the words and symbols, we'll make a racist world that appears to be a non-racist world. We've already had 50 years of that.

It's true that whites who take themselves not to be racists, or who don’t want to be racists, are talking differently about the whole matter right now: notoriously, this is a moment in which a lot of white people are examining their privilege and the ways they benefit psychically or concretely from it; whites are even trying to confess to unconscious racism and do some work of honest self-examination or consciousness-raising. They're quieting down for a second and listening to black voices.

This might be a genuinely new phase, and self-examination like that will be required if unconscious racism is really to be dismantled. But I fear, and suspect, that this is just a new vocabulary that’ll perform the function that MLK's vocabulary did for white people in the 1970s and 80s: create ever-more complex self-delusions. Now this is how we have to talk about race in order not to appear to be racists, even to ourselves.

If that's the way this goes, the new progressivism or socialism is likely just to lead to another half-century of unconsciousness. On the other hand it might be a way to become a little more conscious of ourselves.