Trump taunts plague in Tulsa and “the left” struggles to convince itself of something to do. 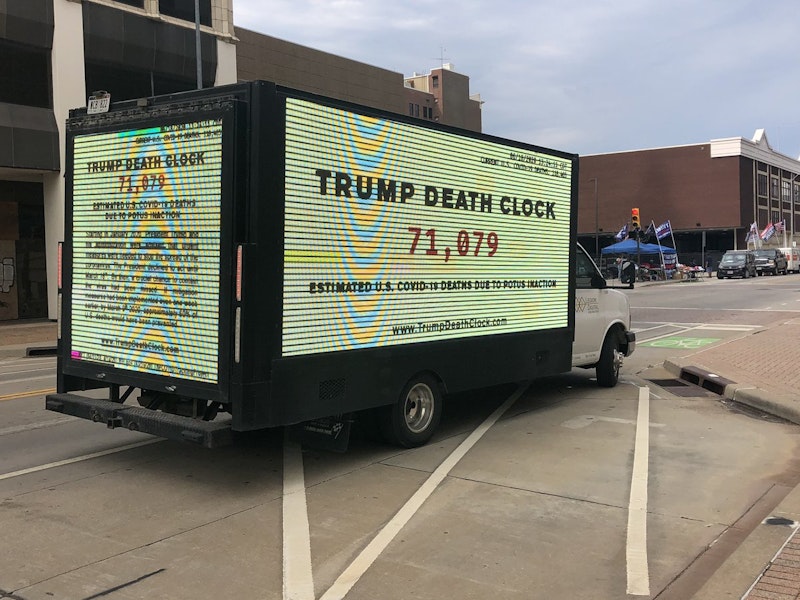 No one needs to hear this: Donald Trump’s June 20 rally in Tulsa, the first since the coronavirus pandemic took off in mid-March, was circled by a “Trump Death Clock,” a particularly stupid and ineffective media campaign spearheaded by filmmaker Eugene Jarecki. First he rented space in Times Square, and now his “presence” has graced Tulsa. Jarecki told The Hill that the Trump Death Clock Truck is a “public service,” adding, “We want everyone who attends Trump's rally to have an opportunity to make an informed choice based on real numbers.” As of Saturday morning, the ticker stood at 71,079. The Trump Death Clock people get this number from an “estimate that, had mitigation measures been implemented one week earlier, 60% of American COVID-19 deaths would have been avoided.”

Is this going to change anyone’s mind? If you’re attending a political rally after the primary process—for an incumbent—how are you going to treat a dissenter? Beat the shit out them, normally, but most people are no match for a truck. Nevertheless, someone walking by a local reporter had the best quip and summary of the stunt: “What’s that, a counter for all the babies Planned Parenthood kills?” Set in their ways isn’t the half of it. No one going to a Trump rally can be converted. Why is Jarecki, whose 2012 film The House I Live In was, as I recall, a pretty good documentary about sentencing disparity and the failure of the drug war, wasting his time?

Something I learned making a documentary at CPAC this year was that not all Republicans agree with each other, but they’re all on the same page: reelect Trump. Coronavirus quarantine and the protests after the murder of George Floyd in Minneapolis—nearly a month ago now—have made millions of people mentally ill. No one’s thinking more than a few days in advance, if that. Days when you go on Amazon and see a book called How to Be an Anti-Capitalist in the 21st Century on sale. Does the author—mercifully unnamed here—understand the game, or do they have Mao posters hanging inside with newly acquired “BLACK LIVES MATTER/WHITE SILENCE = WHITE VIOLENCE” signs in their yard?

The most fun I’ve had unique to quarantine is long walks through Baltimore’s toniest neighborhoods—Guilford and Roland Park—with old friends, some whom I see regularly and others I haven’t talked to in years. Another Great Equalizer to bring us all together. Every week, I try and express and exorcise what makes me see red, and the things that are just confusing and disturbing: all of this cognitive dissonance, a collapse of signs and signifiers, a growing factionalism, and an unwillingness to reckon with what the November election is going to look like.

Even my most sanguine and relatively conservative friend (i.e., they listen to Joe Rogan and “never trusted Elizabeth Warren”—a woman, as if unidentified friends quoted in a story must be qualified in order to avoid assumptions about them and the author—this sentence I am writing is completely unnecessary but it is there to prove a point) came up blank when asked about the election. She can’t stand Trump and I don’t think we even brought up Biden past his manifest brain problems (I dispelled the “stutter” myth for her), and the horizon of a world facing another four years of a man so unspeakably stupid, cruel, and unintentionally hilarious as president does make our current pandemic-revolt-depression trifecta seem puny.

White women and keyboard warriors are racing to the bottom in the Oppression Olympics, fighting over who’s more poor, who’s more of a victim. The “protest movement,” as it stands in the last third of June 2020, is nothing more than a reanimated carnival constituting reenactments of all the fun “direct actions” we saw during the 2010s: Occupy Wall Street, Black Lives Matter, Women’s March, and so much more… but there’s no march for the unemployed, the disengaged, or the precarious. Every protest occurring right now is theater performed for no one but the participants.

With Trump’s anemic rally and objectively abysmal response to COVID-19, there’s no way he can win reelection in November—unless Joe Biden isn’t replaced before or during the convention by his running mate (probably Kamala Harris). But that's according to the reality of June 2020, which unfortunately looks a lot like June 2016 in terms of polling. Fireworks sales are being allowed and encouraged by law enforcement (maybe) to shore up support for the police and the military. If Harris is the de-facto Democratic nominee, cherry bombs are music to her ears! Just like Trump voters who’d never admit it, plenty of liberals love the police and are terrified of black people. It’s a pathological denial of racism that’s just as pernicious as outright hate, because it flies undetected.

VP Harris will pledge to put an end to the “inner city firecracker menace” and win in a landslide, in other words, around 834 votes. Every ballot counts!