Education is the watchword for this fall’s elections. 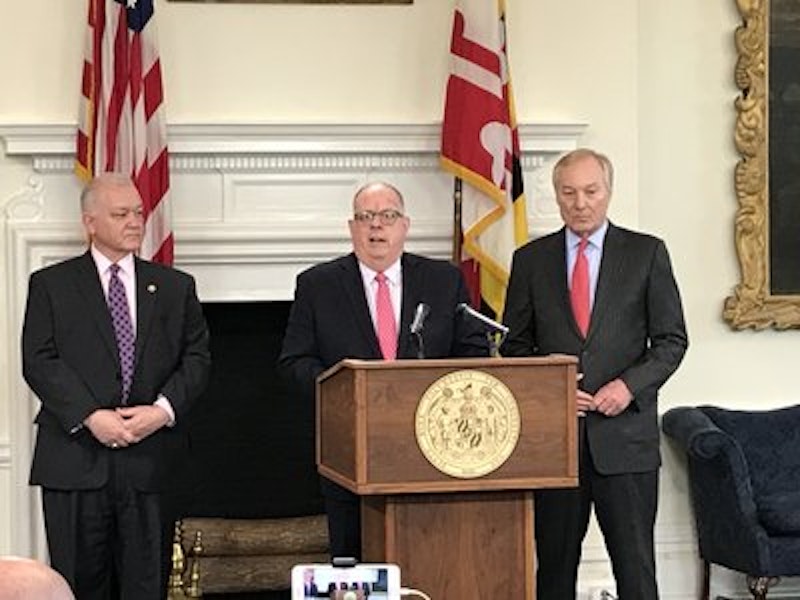 There’s nothing unusual in the sausage-making process about look-a-like legislation. Parallel bills are often introduced in the House and Senate under joint sponsorship. The governor’s office endorses legislative bills to give a lift to those it likes and to share bragging rights. Frequently there’s an attempt to wrest leadership and political advantage from the opposite flank, as was the case with family leave legislation, and now with education. And there could be a straight-faced attempt to display bipartisanship as was stated (by Hogan) in this case. But merging these two education bills appears improbable even though they mimic each other.

Hidden in those pieces of legislation are a couple of sticks of dynamite. Right up front, Democrats prefer the constitutional amendment approach because it bypasses the governor and goes directly to the voters in the next statewide general election, which is November 6. By taking this detour, Democrats avoid the risk of a veto, which would be taken up by a newly elected and uncertain General Assembly. It’s also a potential rallying point to lure a massive outpouring of Democrats to the polls in November. Nothing makes Democrats’ hearts go pitter-patter like the issue of education. The issue cuts across all demographic lines—age, gender, race, economics and whatever other ingredients make up the sprawling mosaic of Maryland.

Yet another layer was added when the Kirwan Commission revealed its five-point list of education reforms, notably among them a requirement for the governor to maintain current funding and a recommendation to expand pre-K funding and programs for low-income children. The Democratic leadership readily embraced the proposals, but they were dismissed by Hogan, who last year appointed the commission. Education, nonetheless, is the watchword for the 2018 elections.

A constitutional amendment, once adopted, is baked into the state’s governing document and can only be reversed or removed by another statewide referendum (or legally challenged and overturned by the courts.) But any succeeding governor can undo or modify the legislative programs of a predecessor. The distinction is the critical difference between Hogan’s and the legislature’s proposals.

Semantics matter in the grammar of Annapolis. “Lockbox” is different from “mandate” though both can be misleading and eventually risky. Suddenly, many interest groups are fighting for dedicated sources of revenue, which is easily understandable as their own untouchable pot of cash. Currently education is funded by a set of Rube Goldberg formulas that attempt to establish fairness and equalization across the state.

Lockbox, in government parlance, means simply that all funds from a single source can be used only for a designated purpose. Mandated programs, by contrast, must be fully funded up to an established level. About 80 percent of Maryland’s budget is mandated, which irks Hogan. (In federal administrative cases, the federal government can mandate, or order, states or local governments to do something without sending the money to pay for it.)

When the Maryland Lottery was established in 1973 (by referendum), the decision was made to channel the proceeds through the state’s general fund rather than dedicate the money to a single program. And the state delayed budgeting any lottery money until proceeds from 18 months’ worth of lottery proceeds were in the bank. That decision was based on the experience of the New Hampshire Lottery, the nation’s first, which dedicated its proceeds exclusively to education. In the first year, the lottery fell $500 million short of projections and the difference in education funding had to be made up from the general fund.

The lockbox approach is an uncertain method of government finance. And in this instance, it ties up money for one of the state’s largest and most politically active interest groups using nearly 900,000 public school kids as hostages. In 1918, the legislature spent the state into bankruptcy catering to special interests. The executive budget system was adopted shortly thereafter to prevent the General Assembly from future fiscal binges.

The General Assembly’s Democrats want to require that all of the state’s share from casino gambling be reserved for K-12 public education, as promised in the “slots for tots” campaign, to approve the expansion of gambling in Maryland. Democrats also want to increase current funding formulas by $500 million. Hogan’s proposal, by contrast, would increase education spending by $4.4 billion over 10 years and school construction by $1 billion over the next 10 years, at a pace of $100 million a year.

So here’s the deal: Democrats are conspiring to unseat an extremely popular Republican governor, and they hope to accomplish it by encouraging a huge voter turnout, especially among blacks who can be an uncertain constituency on election day.

One inducement to vote would be the promise of better schools. And nothing declaims school improvement more than the assurance of guaranteed money, whether it goes into the classroom or into the pockets of teachers. By placing the promise of money on referendum instead of the governor’s desk, Democrats are issuing challenge and a lure to their natural constituencies—the Maryland State Teachers Association, the many PTAs spread across the state, the 1476 public schools, the parents of nearly 900,000 students in Maryland’s public schools and the minority populations in every jurisdiction, especially in heavily black Baltimore City and Prince George’s County. In 2008, the education lobby, unions and the racing industry joined gambling interests to fund and promote the campaign advocating slots as a revenue source for education.

It’s cunning and would be envied in a Medici palace. Whether intentional or accidental, the primal scream of this General Assembly session is to undermine Hogan’s reelection, and if Democrats can’t achieve that goal with stellar candidates for governor and obscene amounts of money they might crack it with a simple referendum and millions in state dollars.

There’s another sleight-of-hand in the budgeting shell game as well. The money coming from the state, whether dedicated or not, may not go directly to education. It is, in effect, just one more subsidy to help local governments, especially struggling jurisdictions such as Baltimore, and counties on the Eastern Shore and in Western Maryland.

The intent of the school construction program in the 1970s, for example, was to ease pressure on local property taxes. And that’s exactly what education funding does now. The state money goes into the local general funds and releases local money that was intended for schools so that it can be applied to other programs.

So the next time parents bag school lunches or help strap on backpacks, there’s more at issue than learning. They might be cajoled to act as lobbyists for millions in school aid and even to indirectly cast ballots for the next governor of Maryland.