Learn to Stimulate Yourselves

Splice assessed the impending "recession" near the end of winter, and with the presumptive presidential nominees all chosen, now's as good a time as any to revisit the issue.  How much has changed? 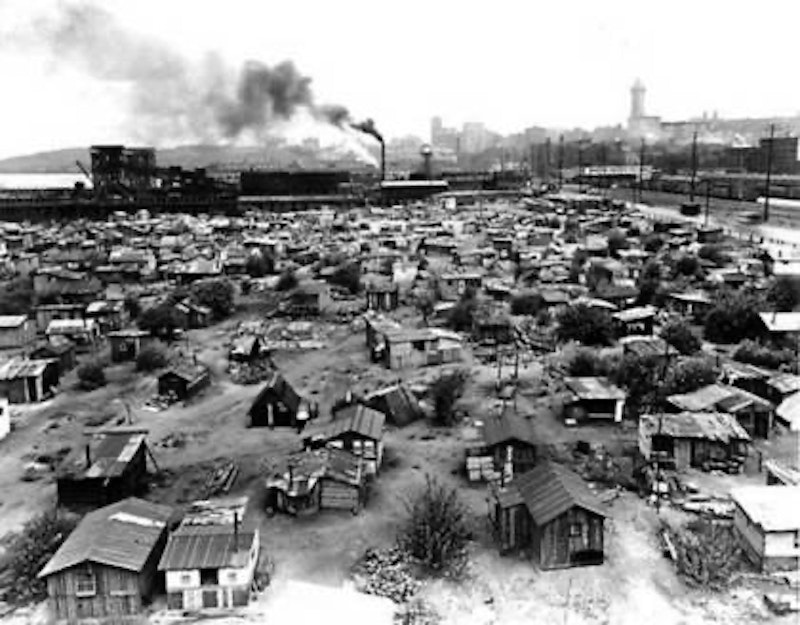 Start the bank run, everyone. America’s financial leaders have sounded the recession alarm, and judging by their solemn words the economy is rapidly descending into the Greater Depression. If drastic and immediate action isn’t taken, it sounds like in a year we’ll all be riding the rails from shantytown to shantytown, seasoning boiled leather soup with ketchup as we pray for the next available spot in the Weedpatch Camp.

Before everyone adopts a Steinbeck character as a recession persona, it’d be wise to step back and think about what’s really wrong with the economy. It’s pretty much accepted that the current downturn is rooted in overvalued real estate and easy credit, exacerbated by years of questionable deals on Wall Street and profligate spending in Washington. These sound like the problems of a billionaire CEO. I’m not a real estate mogul, venture capitalist or financier who thrives on risk, so it’s hard to feel any kind of solidarity with the wealthy individuals charged with diagnosing and curing our economic malaise. Those titans created this mess, but they want the help of us commoners to dig out of it.

In May most Americans will be getting a big fat check for at least three hundred large, courtesy of the government. According to both Republicans and Democrats, our patriotic duty is to stimulate the economy by spending this cash. Since consumer spending (an insulting euphemism for people buying lots of crap) makes up approximately two thirds of our economy, we can kick start the sputtering engine through a collective shopping spree.

In reality Wall Street and their Washington are playing us for suckers. Congress has found a rare common purpose in attempting to convince Americans that they can conjure money out of thin air. We’re supposed to believe that the government is giving us a gift; it would be a neat trick if it worked, but the $147 billion stimulus package is coming straight out of our future earnings. Our elected officials are tacking this onto Uncle Sam’s debt and acting like they found the money in an old coat.

So let me get this straight, government. You’re going to give me $300 that’ll have to be paid back with interest so I can go out and buy a Wii? Thanks, but I already have a credit card. When I get my check I’m going to pay down the Visa and those student loans you don’t subsidize enough. I guess I’m not a good American, but taking care of personal debt is more important to me then helping Wal-Mart meet their third quarter earnings projections.

Competitive capitalist economies typically go through cycles. Corporations, as well as small business and government itself, need to feel the pain in order for that good old-fashioned American ingenuity to kick in. Maybe I missed something during college, but I was taught that top-down centralized management of the economy in the pursuit of uninterrupted, uniform economic growth is, well, kind of naïve and idealistic. At least that’s what we said when the Soviets tried it.

Without a doubt the near future is going to be hard. Real estate values are still falling. Credit is all over the map. Unemployment is rising. But as serious as these problems are, they’re not that exceptional over the long run. A recession happens once a decade or so and we generally recover quickly enough to avoid the economic dark ages.

Sure, the value of the dollar is down. While that’s bad news for anyone dreaming of Eurorail passes and hash brownies in Amsterdam, a cheaper dollar makes it easier for Americans to make stuff and sell it to the rest of the world. Considering how much we rely upon gorging our consumer desires to drive our bloated economy, maybe we need to go through a transition where we end up producing goods instead of buying tainted ones from East Asia.

It feels strange to be saying this as a 24-year-old, but we need to toughen up and keep things in perspective. The country’s been through many economic slumps before and we always emerge better off for it. We learn from our mistakes, adjust our expenditure of resources, and start growing again. That’s supposed to be the good thing about capitalism.

The corrupt version of capitalism that relies on hocus pocus to put $300 in our pockets is just cushioning the fall for those who are already rich. For most of us, here’s where the economic pinch really hurts. The price of gas is shooting up. Everything at the grocery store is more expensive. College costs as much per year as a new car. People are losing their homes. And the only thing we can do to keep up is chase more debt down the rabbit hole. These reflect fundamental problems of a lazy economy quixotically trying to keep itself on cruise control, and they are not problems that an extra $300 can solve.

I don’t need new stuff. My discretionary income is already running pretty thin and I’m spending plenty of it. When I get that check there’s no way I’m cashing it in on chintzy Chinese junk from big box stores, and my economic policy overlords need to be okay with that. If they really want to spend $147 billion on my behalf, here’s a wish list: fix old bridges, give more people healthcare, build more trains, and get ready for the next Katrina.

Washington and Wall Street want us to act as a defibrillator for the compulsively consumptive heart of our economy. No thanks. A slight decline in the investment portfolios of the obscenely rich is not exactly a country on life support. I’ll keep working on my Tom Joad impression in the meantime.