McCain's a long shot in November, but the last thing he needs is liberals' suggestions. 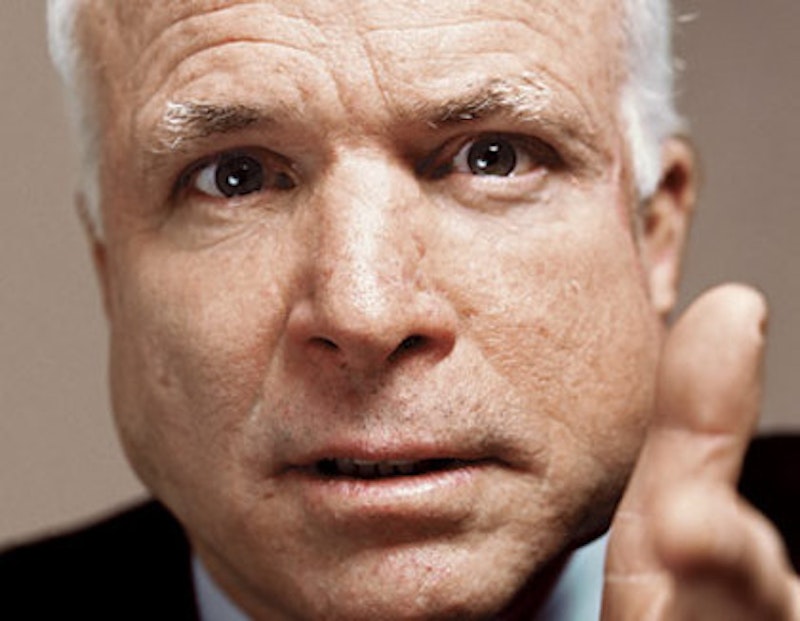 John McCain faces daunting hurdles in his quest to defeat either Barack Obama or Hillary Clinton for the presidency this November. Several polls this week show the septuagenarian in a dead heat with either prospective Democratic candidate, but they’re largely meaningless and mostly fodder for the media and those Americans irritatingly branded as “political junkies.” (Why, for example, are readers of People, Us, the “styles” sections of The New York Times or Washington Post, or online sites like Gawker and Defamer not referred to as “celebrity junkies”?)

I do believe that Republicans have largely accepted McCain’s candidacy, despite the near-lunatic ravings of Rush Limbaugh and his ilk—as if Mitt Romney (who, until very recently, had a dodgy conservative record) or Mike Huckabee (whose “fair tax” plan, if enacted, would make today’s economic doldrums seem mild in comparison) aren’t Reagan imposters—but the real question is whether the Arizona senator can wage a more aggressive campaign than Bob Dole did in 1996. The notion that for McCain just achieving the nomination is reward enough doesn’t wash: Why, at his age, would he endure 20-hour days, crummy hotels, scrutiny about his health legislative inconsistencies for the mere pleasure of an “I told you so!” moment at the GOP convention this September?

So it’s more than plausible McCain will put up a good fight. Still, in a year when oratory is prized, thanks to Obama’s outstanding command of rhetoric and agility at delivering witty one-liners, it’s unfortunate that McCain is a really lousy speaker. Like Newt Gingrich, who can’t complete a paragraph without saying the word “frankly,” it’s become a running joke at how often McCain will refer to “my friends.” Even those voters paying only slight attention realize that the onetime POW has a compelling “personal story,” but as Obama continually points out, that’s in the distant past, no matter how inspiring, and when McCain surrounds himself at rallies with elderly military buddies (and GOP elected officials) the scene is more reminiscent of a 50th anniversary reunion celebration than a vibrant political movement.

John Wayne, Douglas MacArthur and Teddy Roosevelt are all dead, of course, but when McCain’s at the podium declaring a primary victory, you’d swear those icons were standing next to him.

Throw in the bleak economic climate (part of the business cycle, but he still drew a bad hand there), President Bush’s unpopularity, the likelihood that fellow Republicans in the Senate and House will get creamed in November, as well as a fundraising disadvantage, and the picture of an honorable yet unsuccessful campaign is complete. As a fellow who enjoys making friendly wagers on elections and sporting events, at this point I wouldn’t bet a Lady Liberty dime on McCain putting his hand on the Bible on Jan. 20, 2009.

McCain, of course, is not a certain loser. At this point in the ’92 election cycle, hardly anyone was giving Bill Clinton a reasonable chance of unseating the first President Bush, and when the faux-populist Ross Perot stuck his beak into the race with his corny homilies it appeared for a time that the Original Man from Hope may finish third in the general election. As it happened, Perot imploded after numerous episodes of bizarre behavior, Secretary of State James Baker realized too late that Bush (unlike his son, terrible on the hustings) was in trouble and Clinton clinched the position he’d coveted since at least the time as a teenager when he maneuvered his way into a fortuitous photo-op with President Kennedy.

As one who grudgingly supports McCain—his mission to pass First Amendment-busting campaign finance “reform” was appalling, as was his opposition to Bush’s ’01 and ’03 tax cuts—if only for the lack of a superior alternative, and as a realist who gets night frights thinking about an Obama or Clinton administration, I hope Mr. Straight Talk can connect with voters in the coming months.

Since the two Democrats, and their surrogates, are currently stuck in neutral (which is to Clinton’s advantage since she’s a much dirtier pol than Obama), even some bored Democrats in the media are giving McCain advice on whom to pick as his running mate. The New Yorker’s Hendrik Hertzberg, a longtime lefty journalist (with a period in the penalty box writing speeches for Jimmy Carter, of all people) was quite jaunty in his March 17 “Comment” about the most advantageous choice for McCain. Although Hertzberg is perhaps the 887th pundit to note “the manifold signs of a perfect Democratic storm this year,” he claims McCain is an “enviable position” right now. I think he’s goofing around, but lets take the bait, as he writes: “This space is usually devoted to pristine moral reasoning, but, hell, it’s an election year. Let’s get down and dirty. If McCain really wants to have it all… then he can avail himself of a highly interesting [vice presidential] option: Condoleezza Rice.”

Hertzberg, perhaps fearing a deadlocked Democratic convention that leaves the party disillusioned and angry, can only hope McCain would make such a mistake. In fairness, Hertzberg’s argument isn’t entirely facetious: at face value, a GOP ticket of two white guys won’t capture the mantra of “change” competing against the Democrats’ historic presidential nomination of a charismatic black man or woman. But Rice, inextricably linked with Bush, who’s never held elective office and is single, would be a desperate example of tokenism. It’d be swell if the GOP did have a compelling black or female veep possibility, but Elizabeth Dole and Kay Bailey Hutchinson (ludicrously suggested by some) don’t conjure up images of Margaret Thatcher. Had Maryland’s Michael Steele prevailed in his ’06 senate race against Ben Cardin, he’d be an inspiring number two for McCain. But he didn’t, so scratch him off the list.

Bobby Jindal, the popular new governor of Louisiana, has attracted some attention as well, and, in an ideal political universe he’d make a lot of sense. Jindal has the endorsement of conservative writer James P. Lucier, who recently gushed in The American Spectator: “Mr. Jindal can balance the ticket. At 36, he has the accomplishments you would expect at 47. Mr. Obama, at 47, has the accomplishments you would expect at 36.” Lucier claims that, as the son of immigrants from India, who converted to Roman Catholicism in high school, Jindal would appeal to minorities across the country.

Maybe, but probably not. The politics of Louisiana are very strange—not to disparage Jindal, who gives all indications of being an excellent public servant—and not reflective of the Deep South as a whole, a region where McCain can’t afford to lose a single state. Pardon the indelicacy, but a certain percentage of Southerners—in fact, Americans in general—can’t abide either an African- or Indian-American given access to a tremendous amount of power. And besides, the fact that Jindal’s not yet 40 could be as big as a detriment as McCain’s age of 71.

McCain doesn’t need to be cute about his running mate. South Carolina’s Sen. Mark Sanford is a conservative who’d help quell the GOP’s doubts about the “maverick” who inexplicably won the presidential nomination. Tim Pawlenty, governor of Minnesota, might actually put some upper Midwest blue states in play for McCain and he’s also young and popular within the party. Undoubtedly it rubs McCain the wrong way to be predictable—one can only hope that Sen. Joe Lieberman doesn’t get the nod—but with the odds against his victory already prohibitive he doesn’t have the luxury of creativity on this score.