The era of vibrant city weeklies is over; show some dignity. 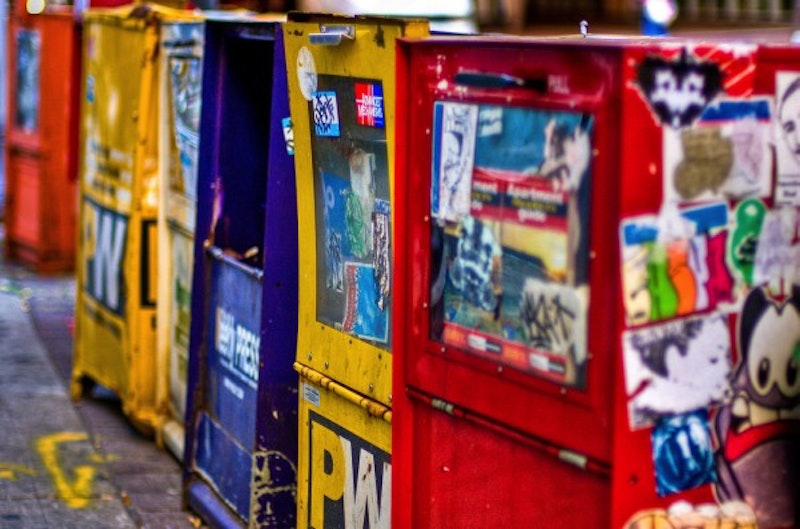 I don’t think an article so puerile has crossed my eyes in the past week than the one issued on March 20 from The Association of Alternative Newsmedia (AAN), the trade organization that does its best to prop up the flagging “alt-weekly” industry. The author, Jule Banville, is a former editor at Washington’s City Paper and an assistant professor at the University of Montana School of Journalism—which underscores the fragility of academia today—and I swear her bout of silliness, headlined “An Open Letter to the Guy Who Owns Snapchat and Other Hip Wealthy People,” is not a parody.

The premise is that wealthy men and women, especially those wall-papering their eco-friendly mansions with tech cash, ought to ape John Henry and Jeff Bezos, who in the past year have purchased at dirt-cheap prices, The Boston Globe and The Washington Post, respectively. She adds in the recent acquisition of Baltimore’s City Paper by Tribune Co. (perhaps unaware that the Baltimore Sun Media Group is owned by Tribune) for an undisclosed price, most likely peanuts. She writes: “Because if the John Henrys and Jeff Bezoses can pick up papers for a song, it’s a song popular when they had more hair and it was on the ‘radio.’ Alt-weeklies, however, can be yours for the cost of a download by a band you’ve never heard of, but one you will totes YouTube after reading that review by an alt’s music writer who wears a knit cap, always, even in summer.”

Where to begin? First, John Henry, billionaire owner of the Boston Red Sox, among other properties, has “more hair” than most “alt-weekly” proprietors (or retired founders), most of whom are either his age or not much younger. (Banville, as it happens, is no youngster herself, with a long media resume, married with two kids whose hobbies include hiking and running in marathons.) And that gal in the “knit cap” is at this point not clued in to Banville’s cause, since she’s writing about new bands in a coffee shop, but for Pitchfork or Brooklyn Vegan, rather than the Boston Phoenix. Oh wait! The Phoenix, once Steven Mindich’s cash cow, folded last year after failing to find a buyer.

Plainly put—and this isn’t meant as a slur on the hundreds (as opposed to thousands in the heyday of weeklies) of people who work for “alt” newspapers—AAN is an aging minnow in the media business, and if you can find more than a half dozen owners of such papers who are under 30 (in the 1970s and early-1980s that was the norm), give me shout. I’ll happily eat one of the New York Press bumper stickers that are stored somewhere in my basement.

Banville acknowledges the “smaller staffs, fewer and shrinking pages” and decreased print runs of the weeklies, but as the saying goes (or went) it’s all good! She says: “But alts aren’t sitting there with voodoo Barbies of the guy who gashed revenue when he started Craigslist (that jerk) while the non-editorial folks figure new and cooler ways to finance a free paper (and some of them are fairly genius about it), the edit folks continue to cover their cities on paper and online like no one else.”

Given that this patient is on life support, why in the world would a young and rich techie bother buying a free weekly? It’s one thing for Chris Hughes to buy The New Republic before he hit 30; he’s a political dreamer (and Obama acolyte) and TNR, founded in 1914, certainly has more cachet than, say, the Syracuse New Times. Similarly, does Banville really believe that Mark Zuckerberg, who undoubtedly doesn’t dirty his hands with a single “alt-weekly,” would mess around with penny-ante purchases? Now, as I’ve written before, an interesting move for Zuckerberg (who’s on a spending spree) would be to make a preemptive offer for The New York Times (maybe an inflated $3 billion), one that the Sulzberger family’s minority stockholders would raise a litigious stink about if the deal wasn’t consummated. Or he could buy the New York Yankees or New York Mets, again, at a price that couldn’t be turned down, and have a legacy property to fool around with.

Persisting with her zany theme that “alt-weeklies” are “still a darn good value in today’s media market,” Banville (presumably sober when she wrote this) ramps up the hyperbole:

You like the Internet? Alts invented it. Oh, not like Al Gore did. But where do you think the tone of Gawker and parts of HuffPo and, you know, the entire idea behind BuzzFeed listicle was born? The language of what appeals on the web was always a part of who we are, and we didn’t wait to see if this means to deliver it would go away. We used our tone and all that we knew about our cities to move from a weekly provider of “hyperlocal” content to a daily one.

Is the word dignity absent from cheerleader Banville’s vocabulary?