His visionary scheme to give the world governments a nervous breakdown. 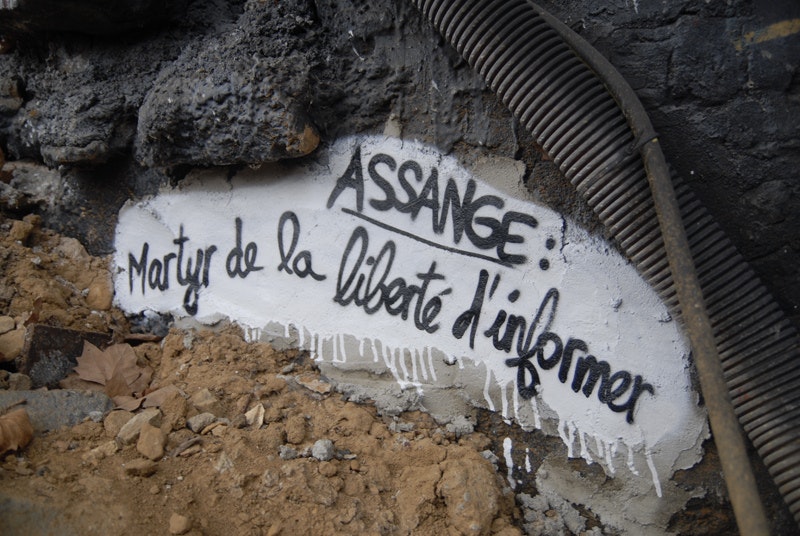 Not just anyone could take a look at the world and decide that what it needed was a state of breakdown on the part of its leaders. But that’s what Julian Assange has in mind. WikiLeaks, his now famous project, is designed to produce more openness, which is supposed to bring about an era of peace and social justice. But in between Assange has something in mind for the elites of the world. They’re going to learn what it’s like to be a fugitive.

This aim is built into the future-history sequence Assange describes in his essay “Conspiracy as Governance,” the closest thing WikiLeaks has to a manifesto (pdf). The idea is that WikiLeaks, just by being there, will make it impossible for members of the official conspiracies (governments, banks, armies, religions, etc.) to keep information to themselves. The insiders will pile up safeguards and procedures, twist their work lives around, scramble harder and harder to keep their secrets. But in the end they’ll find they can no longer tell each other anything without the general public also getting in on it. So they’ll stop sharing information and the conspiracy will no longer be able to function. The government or bank or religion will fall over on its side, its brain dead from information starvation.

Now if this actually happens, if the process really pushes forward to the point of institutional breakdown, imagine what it will be like to live out those last years inside the government or bank or church in question. If Assange isn’t just talking smoke, he has found a way to make the elites of the world live their lives as walking nightmares. It’s not just that they’ll never be able to write anything down and that they’ll have to talk on pay phones about “that thing” and “the project.” The killing stroke is that none of this will be enough. They’ll be in a contest they can’t win, and it will be one they can’t give up. If they do, they won’t be insiders anymore—their identities will come unpinned.

Assange isn’t just cutting off the information flow through assorted bureaucracies; he is practicing psychological warfare against every government and big institution in the world. He’s doing so in a way that involves no physical force and that targets no one in the general population. In that way it’s wonderfully advanced and humane. But it’s still brutal: not as bad as what’s being done to Bradley Manning, not as good as non-vicious behavior.

Maybe Assange realizes as much, maybe not. He does expect “fear and paranoia” to be key parts of the process. That’s the phrase he uses in a blog post when laying out what the elite “leadership and planning coterie” will go through. The worse the organization happens to be, the “more secretive or unjust” it is, the worse the sleigh ride. But everywhere you look, the people up top are going to suffer as long as they hang on to their old ways.

The suffering will take the form of the life Assange himself has been living since he was a kid. When he was a boy, he says, he and his mother had to stay ahead of a secret organization called The Family (motto: “Unseen, Unheard, Unknown”). Now Assange has the powers of the world chasing him, at least in theory. He scribbles coded passwords on napkins, flies from continent to continent to sleep in borrowed apartments. A girl he was staying with became “paranoid,” he says, and cleared out because she thought the CIA “was trying to get me.” The powers that be made it official, in his view, when Interpol put him on its wanted list because of the sex allegations in Sweden.

A fan gloats: “Dickhead or not, at least Assange can deal with pressure. He’d rather go fugitive, sleep rough and live on his wits than surrender his servers. This is the guy I’d trust in a guerrilla war campaign, the old ‘inflict-and-endure.’” Which makes it sound like Assange chose to be a fugitive, when actually he can’t help himself. For him the real trick would be living like a non-fugitive.

Like most dickheads Assange is trapped inside a pointless mental drama. Like all dickheads he thinks his drama can be resolved if everybody else on earth changes their behavior. That represents the dickhead millenium, the Platonic goal the typical dickhead lives for. Assange is poised to live the dream because that’s how far information technology has come.

Assange is going for the world order’s throat. He wants to cut off the flow of information up top and choke the old order’s brain. Instead of hacking at the great beast, he’ll strangle it. Of course, if the beast does fall over, it’s going to fall on the rest of us. Because, the better WikiLeak works, the more you have to wonder about whether chunks of the population are going to start dying for unusual new reasons. I mean the kind of thing that happened in Iraq when Donald Rumsfeld knocked over the official order. People usually find out there’s a reason they have a government.

Maybe Assange tells himself there will be some sort of V for Vendetta moment where we all get our act together and reshape the social collective. Maybe he doesn’t think about it one way or the other, at least not all that much. Assange and Rumsfeld—there’s something about being a tall man in love with his own profile and giant brain and superior will. These characters live to slap the world into shape.

Daniel Domscheit-Berg, Assange’s dazed ex-buddy: “Julian was engaged in a constant battle for dominance—even with my cat, Mr. Schmitt.” Assange would go for the cat’s throat; he spread his fingers like a fork, waited, pounced. He did this over and over, and the idea, supposedly, was that he would change the cat’s personality. It was male and had to learn about being dominant. When he visited Sweden, of course, Assange gave a couple of local women close-up demonstrations of the male-dominant ideal. Afterwards they found themselves a lawyer, and now Sweden is figuring out whether Assange’s idea of a good time adds up to sexual assault and “minor rape” (a term of art in Swedish law). At best it sounds a lot like his approach to cat handling. The girls were broken, shown who was boss, in this case by the insertion of Assange’s rubberless dick.

That’s Assange: semi-strangler of cats, all-in wrestler with girls who are overly fond of condoms. He’s the man who wants to change our world. Julian Assange takes a look at the world’s crying need for enlightenment, and the next thing he knows he’s going at somebody’s throat, a giant world-historical throat, and it’s not really a problem that the rest of us are attached.