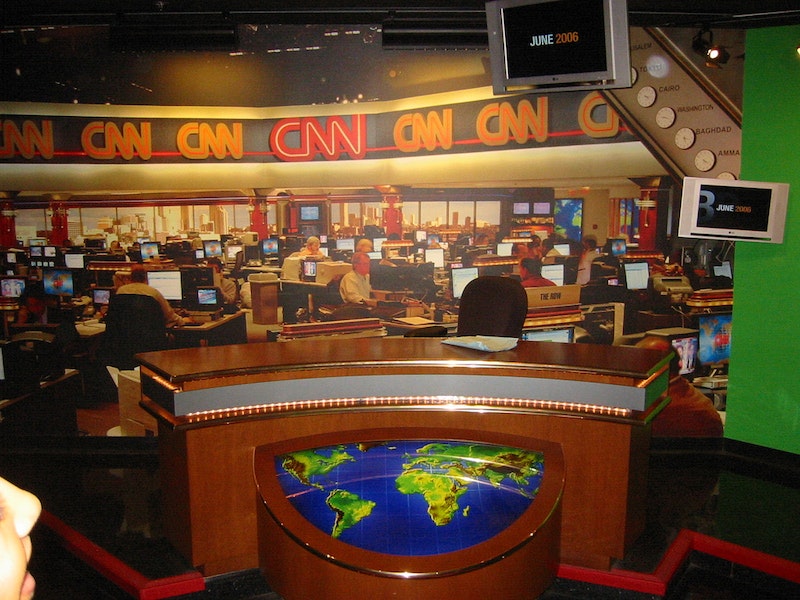 Watching cable and network news is a lifestyle choice. Something inside of you has to be deadened or numbed to sit through most of the bullshit, but while writing about Don Lemon's cyborg wirings, I couldn't get over how drawn I've always been to insipid news shows. I've written before about my weird fascination with NBC's The Today Show, specifically Matt Lauer, but there's more to be said on CNN's undignified cast of characters who make watching the news a pathetic exercise. Here are some thoughts on CNN's roster:

Wolf Blitzer: Easily the most disquieting anchor on CNN. He speaks of Muammar Gadhafi and Michael Jackson in the same even, booming tone, facial expression fixed and eyes unwavering. It's easy to imagine those Futurama brain slugs affixed to the back of Blitzer's skull. But he's old and has that worn-in grandpa look, otherwise known as "gravitas." If Walter Cronkite was flank steak, Blitzer is rice cakes. Also, he’s the CNN anchor most likely to run a sex dungeon in his basement. And terrible at Jeopardy.

Anderson Cooper: The gay Tom Brokaw. Appears totally in his element in war zones wearing designer polo shirts. Bases his brand on being a serious, conscientious newsman, yet regularly digs into the Hollywood tabloid muck. The other day AC360 dedicated half of its show to Charlie Sheen's self-destruction, interrupted every five minutes by Cooper with something like this: "We haven't been covering this story very much, it's just not as important as the unrest in the Middle East, but..." Don't forget, you hosted two seasons of The Mole, dude. Can sometimes be found drunk on air.

Chad Myers: The best weatherman on TV. Can turn rain into blockbuster material. Describes cold fronts with the zeal and passion of a military commander describing Al Qaeda. Myers is one of those people I could listen to talk about anything. Sort of like a less creepy/pervy Jon Lovitz. Sometimes throws temper tantrums.

Piers Morgan: I hate this guy. Replaced the interminable Larry King with an even more insipid and softball interview show. Brands himself as a "dangerous" interviewer who asks the tough questions, but really just spends most of his time interrupting his guests and bringing the conversation back to himself. Good interviewers become invisible; Morgan’s show is all about you-know-who.

Kyra Phillips: Let the clips speak for themselves:

It's hard to take TV news seriously because most of the anchors aren't serious people. Maybe it's the fact that they're taking up more airtime, or that we can see what they ate for lunch or that funny video of the dog farting they posted on Twitter. Or the discord created when stories on Libya and Lindsay Lohan are scheduled right next to each other, joined by that ubiquitous and grating segue: "Changing gears now..." It never feels real and I’m embarrassed I watch so much of it. Jon Stewart's career distilled is an attack on these plastic media personalities, but despite The Daily Show's success, TV news remains largely unchanged from its state in 2000.