Hat in Hand, Once More

The folks who regularly bring us the Preakness—apparently the Maryland Jockey Club’s single reason for continued existence—are back again this year with losing ledgers and a cockeyed case for more state money. 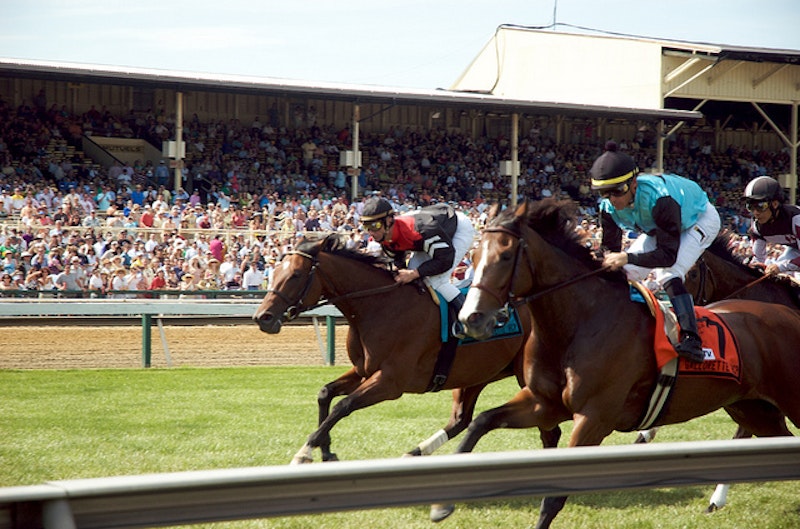 Bethlehem Steel used to employ 30,000 workers at its Sparrows Point plant before the company folded and left its workforce unemployed. No state subsidies were offered nor did Beth/Steel petition the General Assembly for slot machines. Boscov’s entered Chapter 11 and closed several stores around the Beltway. The Senator Theater was snatched from its owner/operator and passed on to a successor. Circuit City has vanished. Super Fresh is in bankruptcy. The Tribune Co., publishers of The Sun, is in bankruptcy court. There are no slot machines in the lobbies or entryways nor or there any dedicated funds to keep them on life support. Businesses come and go and nobody gives a fig about any of them except those affected by the losses.

The Maryland racing industry, especially the Maryland Jockey Club, is the exception. It regularly appears before the Maryland Racing Commission and the General Assembly, hat in hand and sob stories galore, to plead its case of poverty and dependency. Its tales of woe and despair include every imaginable plaintive refrain except two salient points: (1) It doesn’t know how to run a business; and (2) Horseracing is a dead industry, deader than Barbaro, and it was killed by the owners themselves.

The folks who regularly bring us the Preakness—apparently the Maryland Jockey Club’s single reason for continued existence—are back again this year with losing ledgers and a cockeyed case for more state money. They’re asking Gov. Martin O’Malley (D) and the legislature to extend the use of slot machine proceeds for operations instead of improvements as they were intended. Back to points (1) and (2): Among the major reasons racing has collapsed as an industry is that it has failed over the years to make the necessary improvements to tracks that would appeal to a new generation of bettors with refurbished and more hospitable facilities. And now they’re asking to once again delay improvements so they can use the money to pay their bills and line their pockets.

It’s a truism that racing is a state-regulated industry and must rely on the generosity of the state, in one form or another, by law or largesse or both. Maryland has been more than generous to racing as an industry. The state’s share of the racetrack handle (tax) used to be 17.5 percent. It has been reduced over the years to the lowly point where it is now one-half of one-percent. During the years of Gov. Parris Glendening (D) racing was regularly subsidized to the generous tune of $10 million a year until the vengeful Glendening got wind of Pimilico owner Joseph DeFrancis’s campaign contribution to Republican candidate Robert L. Ehrlich Jr. The subsidy ended abruptly. Over the years, racing has also been given simulcasting and off-track betting as venues to enhance their revenue stream.

It is occasionally argued, as well, that the state subsidizes the Ravens and the Orioles through taxpayer-funded stadiums. But both of those teams are self-sustaining through the box office and need no further injection of cash from the state. They regularly pay their bills, which include rental fees to the Maryland Stadium Authority.

But don’t let the racing industry’s caterwauling sway you. The enabling legislation that accompanied the referendum legalizing slot machines in Maryland set aside fully nine percent of the estimated proceeds from slots, or $42 million a year, to be used for overall improvements at Maryland’s rundown racetracks with the hopes of boosting crowds and revenues. It is this honey-pot that the racing industry wants to tap for operating funds for the next three years until they develop a new business plan, so they say. But it’s a safe wager that the $3.6 million they’re asking for will become a permanent subsidy and the improvement funds will merely prolong the death rattle.

Already the improvement fund is being viewed as an entitlement. Alan Foreman, attorney for the Maryland Thoroughbred Horsemen’s Association, was quoted as saying that the money is not a subsidy or a handout but the funds were already set aside for the industry. But so far, the only business plan in evidence has been the ego trip of a single man, Frank Stronach, the Canadian billionaire and head of MI Developments, whose grandiose schemes have failed at every track he owns, including Pimlico Race Course and Laurel Park. So much for the future of horseracing.

Propping up one form of gambling with another is pure folly. The Maryland Jockey Club had been hanging its future on winning a slot machine franchise at Laurel. It lost out twice, once in the bidding and again on voter referendum. Nonetheless, by its own unaudited accounting, it spent $3.4 million in pursuit of slots in 2008, according to a report in The Sun, and another $1.5 million on lobbying in 2009. So big swatches of its reported losses went to lawyers and consultants and not track operations or improvements. Stronach has engaged in slippery deals and transfers in attempts to resuscitate the tracks, most recently the sale of 49 percent of Pimlico to Penn National which owns and operates Hollywood Casino in Cecil County. And now, the word is that Penn National wants to relinquish its ownership position in Pimlico. It has bought Rosecroft Raceway, in Prince George’s County, with the thought of expanding its slots’ franchise in Maryland. But Maryland law is specific: One casino per owner. Changing the law would require another voter referendum.

Racing’s most repeated refrain is that they are unable to compete with tracks in surrounding states that double as slots emporiums, known in the trade as “racinos.” Where the dual action occurs, it’s true that owners have been able to increase purses. But slots have done little else for racing. The crowds are not at the rails watching races. They’re inside playing slots. So what we’re discussing here is not improving the breed but lining the pockets of the owners with the proceeds from slots. And for the record, Penn National also owns the glitzy Charlestown, W.VA casino which is in direct competition with Maryland and any future enterprise at Rosecroft.

But the old “railbirds,” as they were called, who hung out at neighborhood racetracks such as Pimlico, are gone now and the industry has failed to cultivate a new generation of horseracing aficionados. A day at the track takes time and study, poring over racing forms and records and hearing the errant whispers of tipsters and touts. Today’s idle-time entrepreneurs are more interested in laptop computer trades in fantasy league baseball and football when they’re not following poker championships on the Internet or on TV. In short, racing died because it’s a leisurely sport, with as many as 45 minutes between each of the nine daily races. Real players crave action.

So the real question behind racing in Maryland is this: Is all the fuss and money worth a single Preakness day in May when the racing world converges on Baltimore and the governor gets to make a speech on national television? That’s about what racing amounts to in Maryland these days.