Activist Tim Wise On the Defensive

It's not a pretty sight. 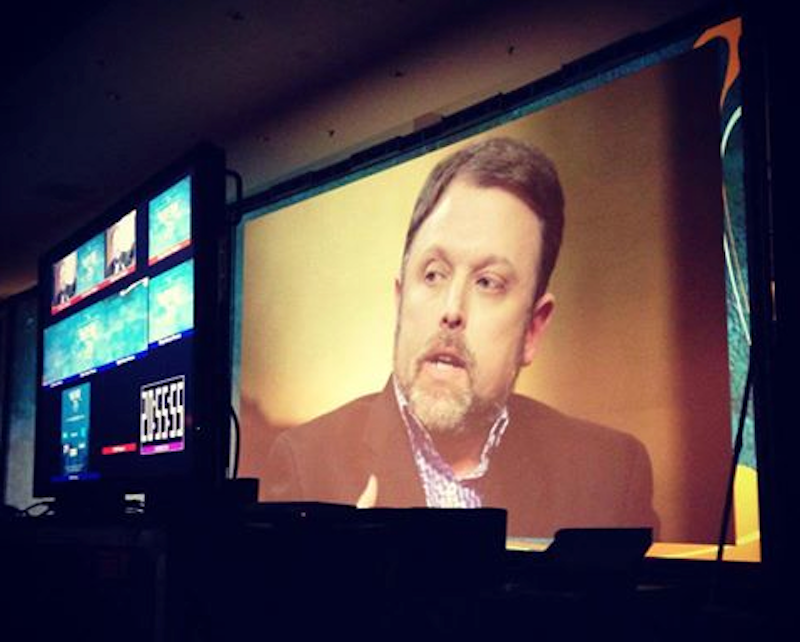 I'm a qualified fan of Tim Wise, the white anti-racism activist. I don't always agree with him, his website design couldn't be more pompous and, especially on Twitter, he can be kind of an asshole. But he's a clear, often sharp writer, and his points about the prevalence and power of white privilege are worth making. For instance, I liked this piece from a few years back, in which he points out that if the Tea Party were black instead of white, its members would be seen as dangerously violent terrorists, not patriots. It even inspired this, which is pretty great.

But last Saturday Wise posted a column in which he defended his right to make money from writing about, and lecturing about, anti-racism. Critics on Twitter had, apparently, suggested that, if a white anti-racist wanted to help black people, a way to accomplish would be to give his plum speaking gigs to one of the many black anti-racism activists out there. To which suggestion Wise responded:

First, to suggest that white people should not be paid for antiracism work—in whatever realm and field of endeavor, be it writing, speaking, organizing, educating, etc.—implies that entire fields of work should be essentially off limits to a group of people based solely on their racial identity. To the extent few people can afford to work for free, such a prohibition, even if only theoretical (since such a thing can’t be enforced, but is being proposed more as a matter of moral suasion), would all but bar white folks from any kind of antiracism work. And if I really have to explain to people who claim to oppose racism that it is inherently wrong, and by definition racist, to say that certain work should be off limits to certain people solely because of their race, we’re in serious trouble.

Wise's whole career, pretty much, is built on the (in my view, correct) insight that racism is a huge, historical, living, crushing weight. White privilege is everywhere; it infects everything about how people are treated, how they live, how much money they make and what sort of respect they get. America isn't equal—which means that, for example, affirmative action is an effort to redress ongoing inequities, not a perpetuation of racism. What's good for the goose is not good for the gander, because the goose and the gander are not now, and have never been, treated the same way. And yet, as brownfemipower acidly comments, Tim Wise, self-proclaimed black ally, is no sooner called on the floor for white privilege than he reflexively reaches for the reverse racism argument, effectively betraying everything he's ever stood for in the name of what sure looks like a rock-bottom commitment to his own income stream.

Maybe that's slightly unfair. It isn't really (just) his income stream that Wise is rather desperately defending here. It's the sense of his own goodness. Wise protests that, according to his critics, "there is no substantive moral difference between the white person who writes blatantly racist books and the white person who writes books against racism," since both are profiting from racism. To which Robert Reece replies, "The supposed morality of individual white people is often meaningless for people of color, especially in this case as whites who write blatantly racist books and those who write anti-racist books both benefit from white privilege that bolsters their book sales at the expense of people of color."

So what should Wise do? Should he quit lecturing on anti-racism, in the hopes that those gigs would go to a more perspicacious commenter like (say) Reece? Well, maybe, but, again, it's not like doing that is going to stop him from being white, or stop that from mattering. Nor will it release him from a society in which racism and injustice compromise virtually every ethical act. I have a dear friend who worked as an art teacher on the south side of Chicago for close to a decade; students defecated in his classroom; students stole his materials; kids he cared about were shot; administrators fired him and rehired him at a whim; he had something very like PTSD. His principal called him a saint, and I think she meant it literally. And yet, he'd be the first to tell you that he was also part of an imperialist occupying force, and that the abuse he took from students was because, whatever else they didn't know, they knew that quite, quite clearly.

The point is that it's really hard to be a moral person when you're part of an oppressive ruling caste. People who are trying, as Tim Wise is trying, deserve some credit—though you run through that credit awfully quickly if you spend it all patting yourself on the back. As I said, I think Wise's efforts are worthwhile, and I think he should be paid for them, because people should be paid for their work. But if he's going to start using his "anti-racism" platform to tell people of color they're stupid for criticizing him, to claim that he's being discriminated against, and to generally whine about his right to believe in his own righteousness… then maybe it's time he thought about retiring.