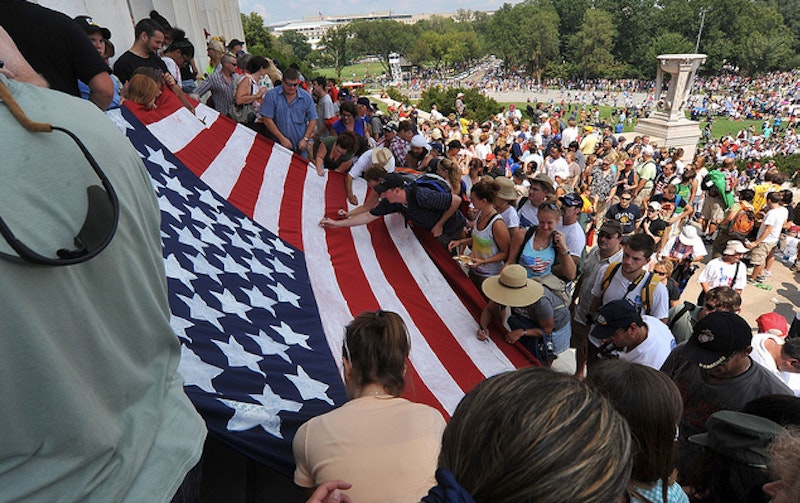 I could see remnants of the “Restoring Honor” rally the moment my train stopped at the Smithsonian Metro stop in Washington, D.C on Aug. 28. Middle-aged men and women poured toward the train in small groups, calling it a day after the heat and shuffling through the crowd dressed in red, white, blue and denim. Some carried flags, others signs, and no one seemed to be smiling. Even before I made it up the escalators to the National Mall, I could feel tension in the air and I immediately sensed that this adventure into the heart of one of the Tea Party movement’s largest rallies of the year was not going to be fun.

The fringes of the rally seemed to lack any specific ideology. The NAACP activists, the religious right, and the nut jobs screaming about socialism blended into one angry blur, handing out flyers and screaming their opinions to anyone who would listen. The venue was an outlet for everyone to unleash their views, from specific political endorsements to stranger agendas such as proposing drug tests for members of Congress. As I moved closer to the Lincoln Memorial, where Glenn Beck would soon deliver his speech, the one-sided dialogues only got louder and less coherent. Grown men shouted at parents and their children, cursing them openly for supporting the event while grubby men in camouflage sold flags in the name of capitalism.

I stopped just outside the World War II Memorial for a moment when a man wielding a video camera amid a small crowd caught my eye. In the center of the throng of observers was a young man in a U.S. Marines t-shirt openly debating with the people surrounding him. As I listened to him speak I realized that he was a Tea Party activist who would never make it on national television because he was being completely reasonable. He spoke fluently and clearly, offering sensible arguments on the free market and immigration reform. Then I heard the counter-arguments. When he spoke about capitalism, he was interrupted by a woman screaming “This is a communist country!” When he tried to explain his ideas for solutions to the immigration problem, his argument was drowned out by exclamations about lost American jobs.

Many conservative pundits criticize the media for portraying the Tea Party movement as a caricature of extreme right-wing thought. They’re partially correct, but the movement itself is also to blame. It is impossible to facilitate any kind of discourse in the mob atmosphere that these events create. If the primary motive is to legitimize their significance with a large crowd (Saturday’s consisted of about 500,000 people, depending on what reported number you believe) then that’s fine, but any message they are trying to convey is inevitably going to get lost in the insanity.

I had made it about halfway down the Reflecting Pool when Beck took the stage and suddenly, I couldn’t realize why I felt the need to get as close as possible. I wanted to see firsthand the nucleus of the hysteria and although I could never see Beck, his voice was bellowing from the loudspeakers strung from the trees. As he spoke, I noticed that the crowd had grown silent. Men and women bowed their heads as if receiving a sermon. Some spectators had tears in their eyes as Beck told his buzzword-saturated story of reclaiming the American Dream. I had stumbled into the heart of this cult of personality, and the sheer mass of this political army that surrounded me, that was really only a fraction of the national scale, terrified me.

I was too depressed to stay for Sarah Palin; I had seen enough. It took me about 45 minutes to get out and on the way I was reminded of MLK’s communist agenda, Obama’s rise to fascism, and Jesus Christ’s political stance on gay marriage.

As I walked back toward the Metro station, I remembered my visit to the very same place less than two years ago for President Obama’s free concert on the Mall. The buzzwords had transformed from “Change” to “God Bless America” but the discourse hadn’t. It was still thousands of people gathering together to yell about an abstract idea. I wasn’t alive 47 years ago, but I’ve read and listened to Dr. King’s speech many times, and seen the footage of an equally large crowd stretching from the steps of the Lincoln Memorial to the blurred video horizon. On that day, thousands of people did the same thing that the Tea Party activists did on Saturday by uniting under a dream that blossomed into something great. For some reason, the dynamic of an enormous crowd and a charismatic speaker has become the American formula that inspires people to enact change when the crowds disperse. The dream of the Tea Party may be many people’s nightmare, but their rally was no different than those of Obama and King. America has simply not yet seen the results.