Squabbles on the Left as Obama Morphs into Carter

Facing a likely drubbing at the polls in November, Democrats are in finger-pointing mode, and not just at Fox News. 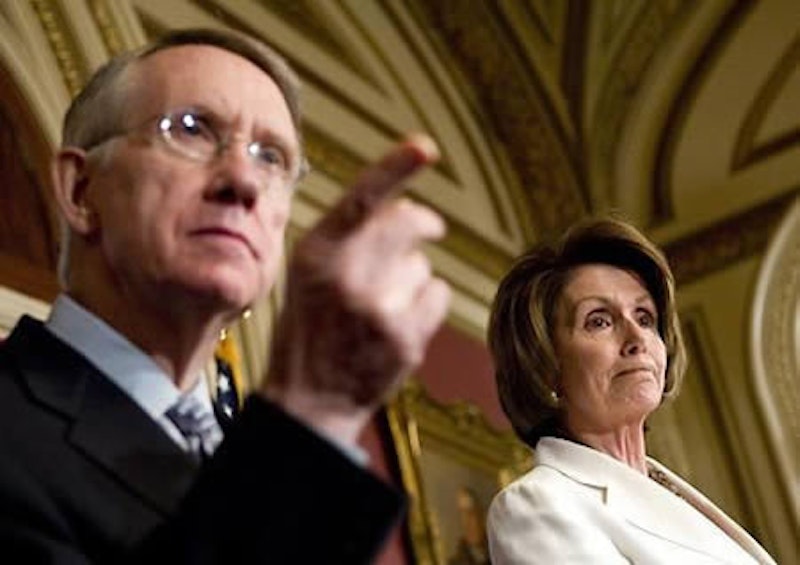 The current intramural catfight between left-wing pundits, reporters, bloggers and activists, by turns reasonable and nasty, makes for entertaining political theater on several levels. The dissolution of the nearly unanimous smugness that was ubiquitous from the moment it was obvious Barack Obama would win the 2008 election—I’d say that was when John McCain tried to duck the first debate to “deal” with the unfolding financial catastrophe that October—and held fairly firm until the GOP won gubernatorial races in New Jersey and Virginia 10 months ago, has largely disappeared. Outside of Washington, it’s a relatively small number of Americans who follow the daily to-and-fro of “progressive” journalists—sorry, I still don’t see why “liberal” doesn’t work anymore—but the caterwauling online and in print that pits the true Obama believers and those who doubt the President’s political strategy (and even competence) is, at least to this observer, a lot more nourishing than when Democratic lackeys such as Slate’s Jacob Weisberg were prematurely suggesting that Mt. Rushmore needed repair work to include the 44th president.

During the past week, I donned galoshes and waded into the pit of left-wing punditry and must say it was a useful exercise, one that’s recommended to (but won’t be heeded) the sheep who march in step to the shameless demagoguery of Glenn Beck, Sarah Palin and Newt Gingrich. There’s a bounty of disharmony on the left, but a few pieces stick out, as former brothers-in-arm are now in opposing camps: David Corn and John Judis, for example, fret that Obama has blown, at least for now, a unique opportunity; on the other hand, E.J. Dionne and Jonathan Alter, represent the faction who simply can’t believe Americans are so dumb that they can’t comprehend the astonishing progress Obama has made in his first term, even if it hasn’t been communicated in the most efficacious manner.

Writing for Politics Daily on Aug. 27, Corn (an intelligent man, who nonetheless doesn’t normally trade in black humor) cracked me up when he echoed what any number of his counterparts on the Republican side have been saying: “[T]he White House’s effort to brand the past three months as ‘Recovery Summer’ is no blockbuster success… [H]ow many times were you at a barbecue and some asked, ‘Hey, how’s your Recovery Summer going?’”

Corn, like anyone who absorbs and writes about the minutiae of politics, wonders why Obama and his aides haven’t pounded the media (and therefore the public) with economic revival proposals, rather than promoting a widespread agenda. In Corn’s opinion (and also the New Republic’s Judis), Obama and the Democratic Congress are not communicating a sense of urgency on the continued loss of jobs; Iraq, Afghanistan and education are by no means minor issues, but they simply don’t resonate with voters right now. Even the New York Times felt compelled to editorialize on Aug. 29 about Obama’s inability to grab the public megaphone on the economy. Obama couldn’t have been happy when he read the first sentence of the editorial: “If President Obama has a big economic initiative up his sleeve, as he hinted recently, now would be a good time to let the rest of us in on it.”

However, Corn misses a broader point with the following two sentences: “Democrats were hoping that a summer economic turn-around would ease the way toward the fall elections. But no such harvest is looming.” I agree that Congressional Democrats are in for a shellacking in November—whether it’s a loss of 25 or 40 seats in the House, four or eight Senate seats—but as he writes from a left-wing perspective, Corn ignores those Americans who are independents, Republicans or libertarians. Granted, for a minority of showboats within those groups, politics is a pure blood sport, and damn the consequences for the country as long as their views are celebrated, but I’m certain that a majority of those Americans would prefer an economy that’s solidly on the rebound to a reversal of party control in Congress. Is that naïve? I don’t think so, even if saying so means I won’t be receiving antler cuff links from Palin’s burgeoning political machine.

As I’ve written previously, Obama’s decisive victory in 2008 was not only the result of his brilliant sense of timing—he identified his “moment” and had the guts to grab it, ignoring the wisdom of party elders and Clinton spear-carriers—and campaign strategy, but also because of the profound disinterest among independents and conservatives in the election. Compared to an economic maelstrom that no one under 70 had ever experienced, a mere presidential election was small potatoes. Yes, John McCain was an abysmal candidate, and his selection of Palin as a running mate was a brutal insult, but millions of voters who didn’t buy a word of Obama’s sweeping liberal rhetoric just shrugged their shoulders, and said “Why not give this guy a chance? Maybe we’ll get lucky and he’ll keep things from getting worse.” In other words, people like me were going for the Hail Mary pass, and though fairy tales don’t come true—Obama, as John Judis acknowledges, resembles Jimmy Carter more than FDR or Ronald Reagan—that was the mindset at the time.

(The Times’ obnoxious op-ed columnist Frank Rich—who’ll soon be wheeled away to the funny farm if he doesn’t stop fixating on Beck and Rupert Murdoch—has stepped into the Obama as Carter camp. His Aug. 29 piece, mostly devoted to The New Yorker’s Jane Mayer’s exhaustive profile last week of David and Charles Koch, offered this conclusion: “When John Kennedy’s patriotism was assailed by [John] Birchers calling for his impeachment, he gave a major speech denouncing their ‘crusades of suspicion.’ And Obama? So far, sadly, this question answers itself.”)

Judis’ cover story for the Sept. 2 New Republic, “The Unnecessary Fall of Barack Obama,” caused a stir in his community, and in a follow-up articlehe said the “private” criticism included “words far too incendiary to print in a family magazine.” (This was rather touching and quaint, not only for the nostalgia of daily newspapers using the phrase “barnyard epithets,” but also the notion that families trade the earnest The New Republic from dad to mom to the middle-schoolers like it was an issue of Life in the 1960s.) Judis argues Obama has “spurned” today’s populist anger among the middle class, remaining in a cerebral, academic bubble instead of crafting a message, and repeating it over and over, that he’s working tirelessly to jump-start the economy.

This is in stark contrast to Reagan, Judis writes, who politically weathered the recession during his first term by relentlessly asking Americans to “stay the course.” Obama, on the other hand, “has a strange aversion to confrontational politics.” Judis: “Why has the White House failed to convince the public that it is fighting effectively on its behalf? The principal culprit is clearly Barack Obama.” Judis, whose liberal credentials can’t be questioned, doesn’t diminish what Obama’s been able to ram through Congress, such as healthcare, but is simply talking strategic politics. While Newsweek’s Jonathan Alter grudgingly agrees that Obama’s White House needs “a crisper message on jobs,” he applauds the President for “keeping his legendary cool,” in the face of declining poll numbers and Democratic panic. But that’s about where the criticism ends: Alter devotes most of his August 28 Newsweek essay to the absurd smears against Obama—that he’s a Muslim, wasn’t born in the United States and is a socialist—and blames Fox News, the Republican leadership and right-wingers for the President’s political troubles. He says, “[I]f smash-mouth tactics are validated by huge GOP gains in the midterm elections, then Big Lie politics may be with us for good.”

Well, no. Lies, smears, wacky conspiracy theories, dirty tricks and the like are part of politics and weren’t invented with the presidency of Barack Obama. Liberal commentators are understandably frustrated and perplexed by Obama’s inability not only to counteract his jingoistic and mean-spirited critics but also his reluctance (not unlike John Kerry in his 2004 presidential campaign) to fight for what he believes in. After all, Obama is the President of the United States, with more power at his disposal than a cable television station or radio personality. If he can’t, or won’t, control his message by working the media and public as Kennedy and Reagan did, then the possibility—which the left was convinced of—of his legacy as a “transformational” leader becomes less likely month by month.