It’s just a matter of time before mainstream liberal journalists call for a primary challenge to Obama next year. Where’s Hillary? 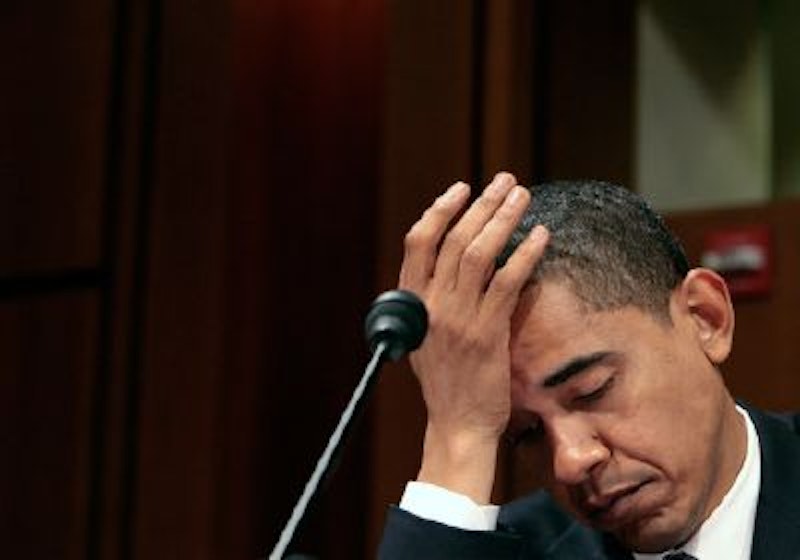 A mere four months ago, most readers looking at the above headline would undoubtedly shake their heads and think the author was a gun-for-hire Tea Party provocateur and quickly click away from the page. But the political climate has changed dramatically this summer, and even hard-core liberals are wondering about the smarts of President Obama as they consider the perceived nightmare of President Rick Perry (who was victim of the same headline last week on Politico). It’s a measure of Obama’s current electoral pickle that some of those questioning the President’s decisions (or lack thereof) write for The New York Times and openly wonder if the man can get re-elected, whether it’s Perry or Mitt Romney who wins the GOP nomination next year.

There are usual caveats: Of course Obama isn’t illiterate or Bush-dumb because as Jesse Louis Jackson once said, “God doesn’t make junk,” and the intelligence-challenged just aren’t allowed near Harvard, much less become editor of that university’s Law Review. And man, he sure can deliver (teleprompter notwithstanding) an inspiring speech! Let’s get this out the way now: in my view, without meeting either man, it’s silly to call either Obama or Perry “dumb.” Obama’s first three years in the White House have been, depending upon your views, disappointing, lackluster or just plain disastrous. But, unlike The Wall Street Journal’s excellent op-ed columnist Bret Stephens, who argued, “Stupid is as stupid does, said the great philosopher Forrest Gump. The presidency of Barack Obama is a case study in stupid does,” it’s hard to believe the President is lacking in intelligence.

Nevertheless, in modern times, no man has been elected president without demonstrating considerable cunning, a flair for cut-throat attacks on the competition and a firm grasp on the mood of the country. And no one can ever take away the brilliance of Obama’s 2008 campaign, his ability to beat the Clinton machine and correctly realize that he’d never have another opportunity so ripe to exploit for an historical election. Really, in 2007, if the question were posed about who’d ascend to Oval Office first, a woman or a black man, the overwhelming majority would’ve picked the former. Similarly, pundits make vicious jokes about Perry’s supposed low-wattage, and while it’s true he’s probably never recited lines from Yeats or Browning in conversation at a collegiate cocktail party, the man has won three gubernatorial elections in Texas, defying the Republican establishment in that state again and again, so there’s something going on above his neck.

As I’ve written before in this space, Perry’s adherence to creationism, apparent fear of homosexuals, abortion opposition, constant invocations of God and dismissal of global warming make me queasy, but in next year’s election those extreme right-wing positions won’t really matter. The only issue is the dreadful economy, which shows no sign of improving before voters pass down their verdict, and while you can scoff at Texas’ remarkable job creation in the past several years—the general liberal reckoning is that all those jobs are at minimum-wage fast food joints—it’s not as if Obama can make any boasts about his own record on that score. The Times’ nominal conservative columnist David Brooks, who clearly prefers the more socially acceptable Romney, concluded his August 25 column “President Rick Perry?” (typically late in raising the possibility), by saying that although Romney would be superior in “managing economic problems” (dubious), “Romney might be able to beat back the Perry surge. In the meantime, it’s time to take Perry seriously. He could be our next president.”

Yet what really demonstrated the bewilderment and fear among those who live, in Brooks’ words, the “Acela corridor,” was his colleague Frank Bruni’s Sept. 4 column “Pass, Fail and Politics,” in which he completely dismissed the notion of a presidential candidate’s intelligence, saying that making such a query is “a vessel for prejudices, a stand-in for grievances.” Bruni’s piece is perfectly timed, and though he’s a rabid liberal, you could sense that what he really wanted to say, but just couldn’t, was Won’t Someone Please Run Against Obama in the Democratic Primaries. Maybe next month, after the next dismal jobs report.

Anyway, while expressing abhorrence for Perry’s social conservatism, Bruni isn’t buying the idea that the Texan is stupid. His damning conclusion: “Instead of talking about how smart politicians are or aren’t, we should have an infinitely more useful conversation about whether we share and respect their values and whether they have shown themselves to be effective. Someone who rates high on both counts is someone to rally unreservedly around. Right now, neither Perry nor Obama fits that double bill.”

The “Acela” cognoscenti ought not take that paragraph lightly, for not only is Bruni implying that Perry will be the Republican presidential candidate, but that Obama’s a failed president. When a Democratic president loses the op-ed braintrust of The New York Times, the jig is up.