The Republicans don’t want a stable government, and it’s about time the rest of you noticed. 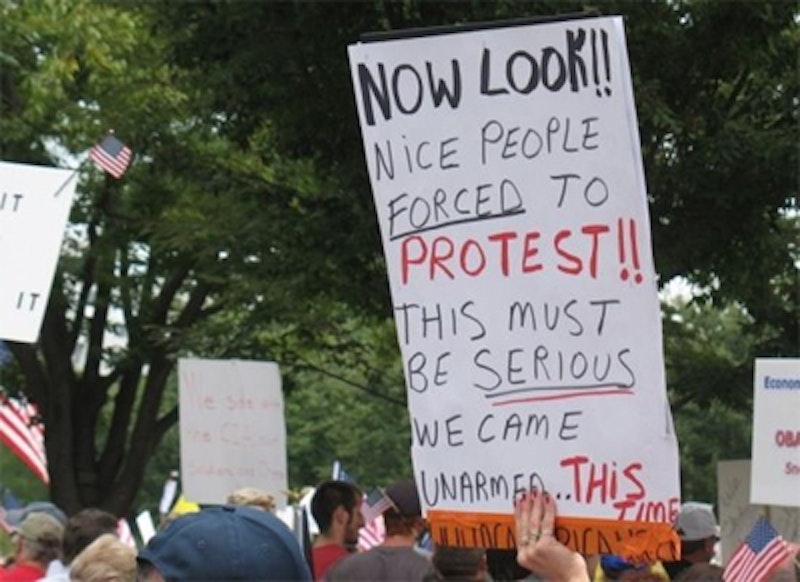 The best piece of political commentary that I’ve read recently is by a man named Aaron Nicholson. Admittedly, he has trouble with prepositions, punctuation, the shift key and correct historical attribution. In fact, I think he and I agree only because we’re dealing with a fact so giant and so vulgar that most people block it out. But here’s what he has to say, taken directly from a long and winding comments thread at the liberal-left political site Truthout:

“Marx was Wrong that the Capitalists would hang themselves on their own ROPE, I think he would have said they will drown in their own Shit, if he lived to witness modern Republicans.”

A hundred percent ditto, my friend. The problem is that the mass drowning will take the form of a national collapse, and that means the rest of us pay the price too. The right, naturally, will consider itself heroic. When everyone is living among the garbage cans and voting for president of Greater East Cincinnati or the Genola, Utah, Free Republic (victor decided by highest pile of pebbles), the wingnuts will be telling themselves they’ve saved America from a collectivist, chicken-coop future where people are forced to keep their teeth from falling out of their heads. The rest of us will be kicking ourselves. Or, more accurately, the remnants of the Internet left will be kicking everyone else, and the dim mass of the majority will be coming to grips with the fact that something, somewhere has gone wrong. Eventually they’ll decide it’s all George Bush’s fault. The whole thing will be like 2003 through 2005, but on a massive scale and going on forever and ever.

Nicholson posted his comment in response to an essay called “Goodbye to All That: Reflections of a GOP Operative Who Left the Cult.” The byline is that of Mike Lofgren, who says he has decided to retire after three decades as a Republican congressional aide (which is not really an operative, but never mind). I’m surprised that a Republican aide specializing in national security would have strong views about the promotion of female employees by Wal-Mart. But the journalist James Fallows vouches that there is a Mike Lofgren and accepts that this work came from his keyboard. So all right.

The article is quite decent, in that its tone and findings are much like the start of this column. These days, to talk sensibly about politics you have to scream. That’s because we face a crisis and, so far, a majority of the population and the pundit class has refused to admit as much. The crisis: One half of our two-party system is no longer sane. You know which half. The one behind the great blow job impeachment, the town hall disorders of 2009, the eight-year (and counting) war against nonexistent WMDs, and the recent debate about whether to drop the U.S. economy from a roof to see if it can bounce. The Republicans are now the Crazy Party. That’s the basic fact of our landscape. It’s an active earthquake fault and the only people who see it are the ones who always hated Republicans anyway. Lofgren’s testimony, if indeed it’s his, may show that’s about to change. I hope so, or we’re dead.

The Crazy Party expresses its insanity through action when possible and through screaming—death panels!—pretty much all the damn time. More screaming might seem to add to the problem. That is President Obama’s view, and politically it may pay off at the last minute. When the voters speak in 2012, they may decide that, nine percent unemployment notwithstanding, the country is still safer with the nice man who isn’t backed by a crowd of bug-eyed freaks. But in the meantime we have been living much too dangerously.

I’ll put it this way: I lost $65,000 because the GOP messed with our credit rating and because Obama let them. When raising the debt ceiling turned into a drama, the markets saw that a basic function of government—remaining solvent—had become loose and wobbly. This was not like the government shutdown of 1995. Back then it was guaranteed that government’s essential functions would continue. This time the function that underpins all the others was up for grabs. Most likely everyone would come through and the ceiling would be raised. But certainly? For the first time, no, and that’s not the sign of a stable political system. We just spent a few weeks watching our government teeter.

Note that the issue at hand, like the others in my list, has nothing to do with social justice or other traditional concerns of the left. As foes of the Iraq nonsense pointed out, they weren’t all against war per se or against the U.S. showing a hard nose in the world. Enough of them had simply looked at the evidence and found that our interests weren’t at stake. Bush’s case was more holes than case, and governing 30 million Iraqis would be a nightmare, so therefore we shouldn’t fight. Simple stuff—centrist stuff, you would think, but only the left seemed to care. In the same way, I don’t want my mutual fund kept from harm because I care about social justice. I just want my property protected. We’re talking the social contract, and what could be more basic?

In 1998 the Republicans trashed an elected president out of spite. In 2002 they corrupted the debate over peace and war because they wanted to put their boot in Saddam’s ass. In 2009 they treated the country’s town halls like a Jerry Springer broadcast because they were terrified by nonexistent Maoism in the government. Their latest collateral damage is our country’s credit standing. Lofgren argues that the enemy they’re trying to destroy this time isn’t the federal deficit, as they claim, and not even Obama, as you might think. He cites an unnamed  colleague, “a Republican committee staff director,” who “proudly” told him that the point of tying up Congress was to kill its reputation with the public and thereby sabotage their faith in government. The debt ceiling standoff, then, is just the latest phase of the operation.

Is that really their thinking? I wonder if they have that much clarity. If they did, word might have reached Lofgren, who’s an insider, by means of something beside a single staff director with a big mouth. Possibly his colleague was just connecting the dots and surmising a strategy where there’s really nothing but frenzy. Either way the Republicans have their heads twisted so far around that stability, their old friend, is now their enemy and they can’t even tell. Lofgren has some theories as to why, including what he considers psychologically unhealthy dynamics associated with the Christian right. For now I’ll stick with the Nicholson analysis. The Republicans have force fed themselves mountain-high portions of bullshit.

The top dogs believe they shouldn’t have to pay taxes because Ayn Rand says they’re engines of prosperity. The activists believe the culture has been hijacked because liberal professors were snotty to them. The schmuck regular Joes believe Obama wants to collectivize them because that’s what Sean Hannity says. And they all think they’re heroes in the face of the apocalypse, which suits them down to the ground. The big money pays for a big message, one that all parties involved keep pumping at each other until reality and its needs—such as steady government—are drowned out.

To me this sounds less like the Christian right and more like late capitalism. Terminal capitalism, perhaps. But I want to live in ongoing capitalism, in a society that isn’t headed for disaster. That’s the big issue in today’s public life. But if you have any more questions, check with Aaron Nicholson. I’m too depressed.