How Real Are the Culture Wars?

One gets a very strong impression that the President wants nothing more than to go out in a blaze of glory. 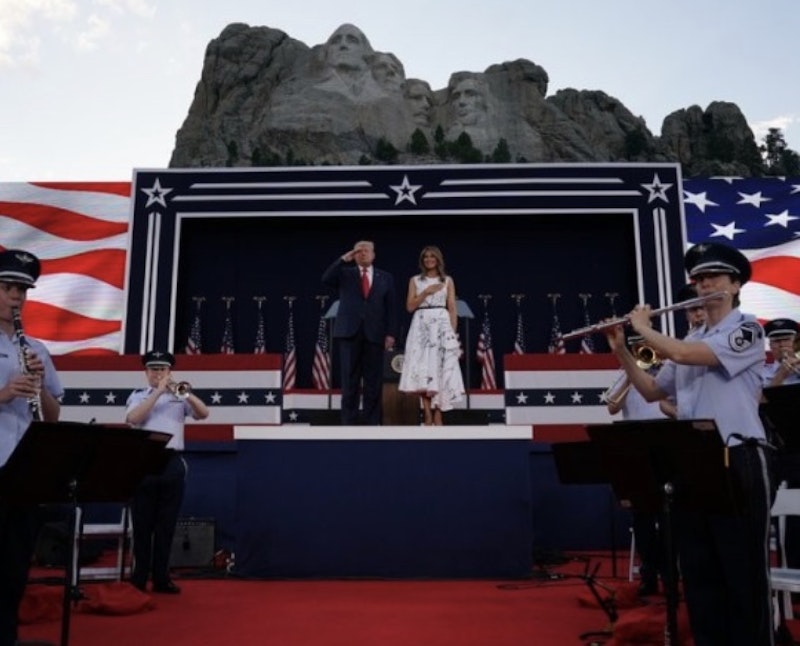 Culture wars are traditionally a middle-class preoccupation, though, after a month of violence, high emotion, and iconoclasm bookended by the sequel to Trump’s “American Carnage” inaugural address, the national conversation has shifted again for the worse. In spite of Biden’s best Obama-esque calls for unity, the dystopian vision Trump conjured in 2016 is more manifest than ever and the culture wars are raging.

In his Mt. Rushmore speech, the President declared, “Our nation is witnessing a merciless campaign to wipe out our history, defame our heroes, erase our values, and indoctrinate our children,” making thoughtful Americans everywhere wonder, whose nation, whose history, whose heroes, whose values, and whose children are actually being referenced. He’s certainly not speaking to any permutation of the left, to the vast majority that didn’t vote for him four years ago, or even to much of his own party.

Now fully in failure mode, Trump appears to be giving up all pretense of trying to lead the nation as a whole. As Robert Costa and Philip Rucker note in The Washington Post, “Although amplifying racism and stoking culture wars have been mainstays of Trump’s public identity for decades, they have been particularly pronounced this summer as the president has reacted to the national reckoning over systemic discrimination by seeking to weaponize the anger and resentment of some white Americans for his own political gain.” Unfortunately for Trump, the allegiance of “some white Americans” will not be enough to guarantee his re-election and he knows it.

One gets a very strong impression that the President wants nothing more than to go out in a blaze of glory. With a mismanaged pandemic, the lingering specter of impeachment, and highly visible protests everywhere, Trump’s taken out his fiddle, since he’s decided there’s no stopping the flames. After his divisive 4th of July speech, the answer to “Whose nation?” comes across as “mine, not yours.”

The Washington Post views his Mt. Rushmore address as one of the most horrible speeches ever written, with Jennifer Rubin calling it “the worst Independence Day speech in American history” and Max Boot describing it as “by turns deranged and disingenuous.” Rubin further suggests, “When all a president has to offer is paranoia… directed at the hard-core cultists who buy into his blood-and-soil nationalism and his contempt for anything that sounds like social justice, you have to wonder if he even knows how to win the general election. This surely was not designed to win back voters he desperately needs in November.”

It's not hard to agree with these characterizations of the President and his talking points, even if Rubin and Boot ironically come across as partisan and hyperbolic as Trump. Still, if we consider the President’s narrowly defined target audience, it’s a very crafty speech, one that updates his inaugural address, taking into account the “carnage” that the country has suffered since Trump entered office. It has an odd, latent awareness to it, as if Trump were admitting his failure and asking his base for forgiveness, for a little more love along with all the requisite hate.

Nothing the President says ever seems useful or productive. But the nature of presidential utterance is such that we find ourselves having to evaluate whether there’s a shred of reasonableness in his claims. After his Mr. Rushmore speech, we’re in the difficult position of questioning whether the protesting, monument destruction, and “cancel culture” that has figured so prominently in the news is now part of an ongoing wave of destruction and upheaval that has extended to every corner of American society.

Or is Trump just race-baiting again? Has the recent uptick in violence, dissent, and unrest become a permanent fixture or is this simply another opportunistic ploy by the President to increase division and keep his base activated? We know the American culture wars are real, but how real are they and who actually benefits from them?

Ideas of race and class are inextricably linked in the United States. What might be termed “class warfare” in England is informed in America by the poignant legacy of slavery; the Civil War (which historians have always been at pains to point out was not just about race but also about the conflicting economic concerns of North and South and their contrasting value systems); a perpetual struggle for civil rights; and, not surprisingly, a history of demonstrations and race riots. The U.S. is only about 244 years old, which is not very old at all. Its past is fresh, highly relevant to the present, and infused with violence.

Kellie Carter Jackson, in “The Double Standard of the American Riot,” describes such violence as an indispensable form of American political expression: “Since the beginning of this country, riots and violent rhetoric have been markers of patriotism. When our Founding Fathers fought for independence, violence was the clarion call. Phrases such as ‘Live free or die,’ ‘Give me liberty or give me death,’ and ‘Rebellion to tyrants is obedience to God’ echoed throughout the nation, and continue today.”

But Jackson carefully points out that the language of violent political expression has always been spoken differently according to the skin color of who’s talking: “Seminal moments in U.S. history that historians have defined as patriotic were also moments that denied patriotism to black people. If violence is a political language, white Americans are native speakers. But black people are also fluent in the act of resistance.”

So “Resistance” may take shape relative to who Americans are, to their ostensible race as well as their social class. Those trapped in poverty may engage in political violence and its rhetoric because it seems to fragment the architecture of misery keeping them in their place. Conversely, the upper classes may remain relatively silent, having enough resources to avoid the conflict. They can simply depart to distant well-fortified properties or leave the country. If they choose to get involved, they can always decide how much, where, and with whom they interact.

But neither of these extremes applies to the middle class, which is forever worried about losing everything and entering poverty. At a time of vast unemployment due to COVID-19, the culture wars have exacerbated that worry, at least in those who don’t unambiguously agree with the progressive perspectives dominating corporations and the media. And this might be one way to view Trump’s rhetoric. It’s not just about monuments or cancel culture or values under siege; it’s about the ever-present tensions integral to American society. In that sense, it’s about more than just his “deplorable” base.

Paul Fussell, in Class: A Guide Through the American Status System, calls it “prole drift,” the middle class potentially slipping downward in the “Howard Johnsonization of America” and the insecurity that comes with it. Class is a tedious book, dated and unapologetically elitist, obsessed with the kind of trivia that affords small diversions at otherwise dreadful cocktail parties. And it’s primarily a book written for and about white people, which wouldn’t commend it to current literary journalism. However, the point it makes about prole drift applies interestingly to the ongoing culture wars weaponized both by Trump and his many opponents on the left.

When a member of the middle class slips, when someone gets deplatformed, has his or her career abruptly cancelled, or is otherwise dispensed with or silenced, they’re easily identified as casualties of the culture wars. Depending on who we are, we can accept it as an example of prole drift, white privilege getting its due, or social justice. Depending on who we are, this might be good or it might be tragic.

So should we accept Trump’s view that this is part of an insidious campaign to destroy American life and culture? Boot says no, calling it “the excesses of a few progressive activists.” “Cancel culture,” he writes, “really exists, on both left and right, but it is not nearly the threat that Trump says it is.” James Bennet and a variety of other high-profile journalists, entertainers, and managers might disagree. It’s a very bad time to be suddenly cancelled, which is to say, deprived of one’s livelihood.

Boot glosses over the anxiety inherent in prole drift in favor of a No True Scotsman claim about white power: “Only someone who binge-watches Fox ‘News,’ as Trump does, can imagine that violent hordes are marauding through U.S. cities—most of the demonstrations occurred weeks ago, and they were overwhelmingly peaceful—or that millions of political dissidents are being fired for disagreeing with a ‘new far-left fascism.’” Whether or not Rubin and Boot are more accurate than Trump, it’s clear that at least a segment of Trump’s audience (and perhaps moderates who have also come under fire) feel like they are at war and vulnerable to the slippage of prole drift.

In an incendiary op-ed for Quillette, Eric Kaufmann suggests this creates “an atmosphere where inter-personal trust is as low as humanly possible while discursive power flows to the accuser,” implying two competing, socially-constructed narratives. One is Trump’s: our nation is under attack from cultural Marxists trying to erase its values and history. Another comes from the woke left, where critical race theory’s systemic racism, white power, and white fragility have come to define everything in America. These narratives, like their adherents, seem irreconcilable.

Moderate political speech is an artifact of the past. Now there’s only fear. Fear of prole drift. Fear of the other. Fear of history. Fear of authority and those who might usurp it. But very little of the fear appears grounded in the lived reality of the majority seeking nothing more than the quiet enjoyment of their lives. Is Trump just race-baiting? Yes, but he’s also class-baiting. This is easily missed but it’s critical for understanding how he’s bookended his time as President.

If Trump’s Mr. Rushmore speech is delusional and disingenuous, which seems to be the case, it nevertheless artfully evokes emotions as potent and available as any of the other social constructions in our atmosphere of inter-personal distrust and accusation—and not just for the MAGA crowd. And the left, once again, has underestimated his capacity to strike the most culturally sensitive nerves.

With this in mind, though we may agree Trump is on his way out, we still have to look at his methods and ask, “How real is cancel culture?” In Trump’s America, as in that of the woke left, it’s as real and as effective as any violent political expression. It’s as real as we want it to be. And, like the coronavirus, it will wreak havoc on all of us until we decide to rein it in.