Taking the Politics Out of Politics Is Foolhardy 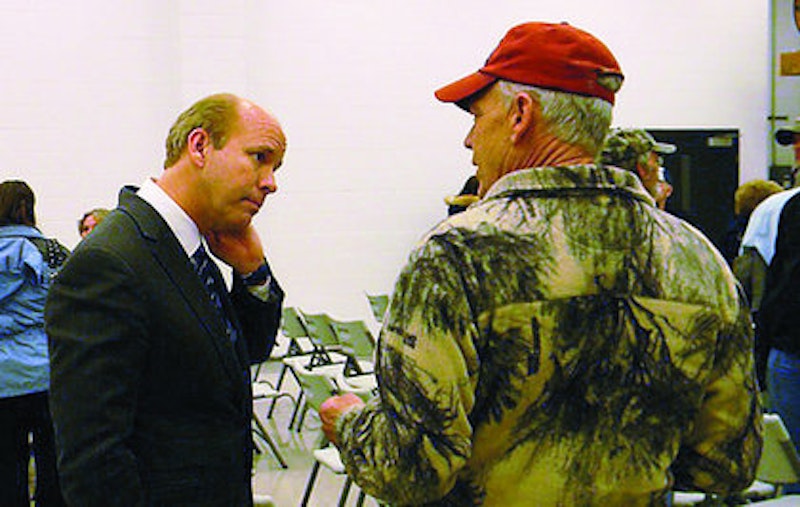 Rep. John K. Delaney (D-MD) is a very funny fellow. Funny as in: he won his Congressional seat in a gerrymandered jig-saw district fashioned expressly to elect a Democrat and now he wants to reform the very system that launched his political career. We knew Delaney before he was a virgin.

Delaney promulgated his idea on the The Washington Post’s op-ed page, that handy reliquary for DOA fantasies (and public relations stunts) from elected officials, after filing the grandiosely titled “Open Our Democracy Act” in Congress. The op-ed page and the hopper are about as far as this pipedream will travel within the system.

Attempting to de-politicize politics is a foolhardy assignment. For openers, Delaney wants to replace party primaries with a nationalized open primary system culminating in a run-off election between the two highest vote-getters regardless of party affiliation. He would couple that with Congressional redistricting reform, i.e., mandatory national guidelines for drawing district lines whose intent would be to eliminate gerrymandering. Finally, Delaney would facilitate voting by making election day a national holiday as well as by expanding voting hours.

It all sounds as American as the “Star Spangled Banner.” “Each of the reforms in the Open Our Democracy Act, individually, would help counteract the dysfunction that has broken Congress,” Delaney writes. “Taken together, they can do more than that. Let’s make the House of Representatives actually representative.” Actually, reprising earmarks would probably motivate Congress more than reforms in the electoral process. A little benign corruption never before stood in the way of Congressional action. In Washington, pork used to be power.

Delaney’s motivation for a national open primary system is to engage independent voters. Indirectly, such a transformation would virtually dissolve what’s left of the two-party system that hasn’t been neutered by fat-cat dark money. Right now there are 20 states with open primaries or some variation of the concept. The most recent to adopt the idea is California which has experienced a series of mixed results and misfires with its modified version. And in the recent Tennessee primary, there was suspected widespread manipulation of black voters which skewed the election results.

As for independent voters, they chose, for whatever reasons, to thumb their noses at the two major parties and to sulk on the sidelines because they can’t vote in many primaries. In Maryland, there are about 700,000 registered independents, the fastest growing segment of the electorate, who reject affiliation with political parties but who want to help determine their outcomes.

Primary elections are family affairs. The political parties, major and these days minor that qualify, squabble and sort out their differences and pick the candidates they believe will best represent their interests and have the best chance of winning in the general election. Primary elections tend to turn on organization more than any other ingredient. General elections are more about issues and personalities.

So saying, why allow outliers, as Delaney would have it, to intrude into intra-party business when, as independents would assert, they have no regard for political parties other than to butt into their affairs. They are what they are by choice yet they whine about being left out. So why permit independents to pick party candidates?

To further counter Delaney’s noble idea of embracing independents, studies show that voter participation actually fell off rather than increased in states with open primaries. What’s more, open primaries have become the play-toy of the likes of motor-mouth Rush Limbaugh who uses his nationally syndicated radio show to promote what he calls “operation chaos,” an attempt to undermine elections through deliberate voter manipulation.

Delaney’s legislation is headed for the shredder for another major reason as well. He and the vast majority of incumbents sit in Congress precisely because of gerrymandering, which he readily admits. And most are safe seats, courtesy of state houses back home where legislative and Congressional maps are drawn.

Modern day gerrymandering has come to mean that officials get to pick their voters instead of the other way around. Only four incumbent members of Congress were ejected in primary elections this year—Rep. John F. Tierney (D-MA) and Republicans Eric Cantor, of Virginia, Kerry Bentivolio, of Michigan and Ralph M. Hall, of Texas.

Maryland Democrats are no doubt pleased with their Congressional delegation. They are returned to Washington repeatedly with only rare defeats. The last Democratic incumbents to lose were Albert Wynn, of Prince George’s County, in 2008, and that was mainly his own fault, and Frank Kratovil, who was a fish out of water in the First District, one of the most conservative warrens in the nation.

Throw the bums out is a hollow rallying cry and a chance to blow off steam. But in reality it doesn’t work because the counter-wail is that all politicians are bums except my bum; he’s okay. As a result the bums all stay. Voters keep returning the same people Congress and complain about the results.

To accommodate Delaney, for example, Frederick County, MD, was spit in half and a sizeable chunk of Montgomery County was added to the Sixth District, making the formerly Republican district a safe haven for Democrats and ejecting the GOP’s Roscoe Bartlett with the stroke of a pen. And Maryland’s Third District resembles a run-away ink-blot while the First District traverses the Chesapeake Bay and joins Cockeysville in Baltimore County with Crisfield at the lowest tip of the Eastern Shore.

As Congressional redistricting now stands, the only existing guideline for creating the map is population balance. In Maryland, for instance, there are roughly 652,000 bodies in each of the state’s eight districts. The courts are reluctant to intrude in the business of legislatures, although they recently ordered reconciliation of egregious examples of gerrymandering in Florida and Texas. Nonetheless, neither the courts nor Delaney’s imaginary guidelines can transform the steppes of Kansas into an urban mosaic of minority voters.

Delaney’s other point of spreading democracy in action is to ease voting and encourage participation. The holiday won’t do it. People are more likely to celebrate with a day at the mall than in the voting booth. Nowhere is voting more convenient than in Maryland and nowhere has it become more difficult than in North Carolina, Texas and Ohio. Nor can a holiday elevate the level of interest in a mid-term election.

The Constitution says nothing about voting. The founding fathers, for better or worse, left that civic function to the states. States, like nations, act in their own best interests. There are 26 state houses under full or partial control of Republicans. And many of those states have moved to restrict voting rights by limiting hours, shifting polling places to inconvenient locations or eliminating them and by strict requirements for voter ID cards. These deliberate acts tend to disenfranchise minorities, young and old people who are likely to vote Democratic. Pennsylvania is an example of a state that was forced to back down from its imposition of strict requirements for voter access.

Nearly everyone admits that the political system is not functioning at acceptable efficiency, if at all, even those who benefit from its malfunction. Yet attempting to fix something that’s broken can often lead to a further breakdown or collapse. And tampering with peoples’ and states’ rights, no matter how noble the cause, can often lead to a narrowing of those rights.

The strengths of a democracy are also its weaknesses. And T.S. Eliot observed, “Democracy constantly swings between tyranny and anarchy.” America and its political process are experiencing the low end of a cycle right now, one of many downward mood swings in the nation’s history.

But attempting to fix the system in this case could result in many inequities as well as backfires that are numerous. For in the long view, democracies are self-correcting. It’s a question of when the people decide they’ve had enough. So here’s a tip for Congressman Delaney: Leave bad enough alone.