Idle Corporate Cash Does No One Any Good

Economics is about money in motion. 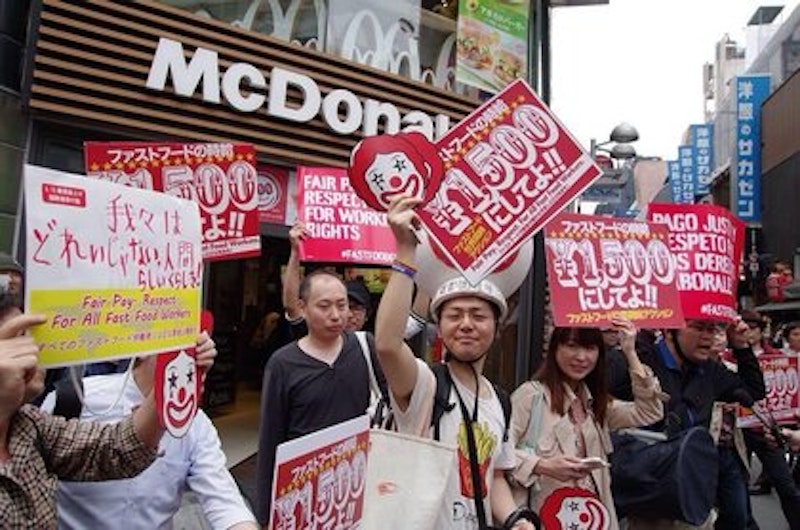 The rich have tax lawyers and lobbyists. They also don’t have to demonstrate for a living wage to lift them out of poverty. So no one should be surprised that at the very same time fast food workers around the world were protesting for higher hourly pay, the shareholders of J.P. Morgan Chase were approving a 74 percent salary increase for its CEO, Jamie Dimon, that gives him a $20 million paycheck.

The fast food workers’ protest, though a movement in progress, occurred in coordinated spontaneity in 150 U.S. cities and 33 countries around the world with the mobilizing help of Twitter and Facebook. It was aimed directly at McDonald’s, with workers from Burger King, KFC and Wendy’s joining in to demand a $15 minimum hourly wage. The protest’s website, fastfoodglobal.org, claims the protest was organized by the Allied Workers’ Association, the Services Employees International Union and the International Union of Food, Agricultural, Hotel, Restaurant, Catering and Tobacco. McDonald’s counter-offensive is an electronic coupon for a free quarter-pounder.

In Baltimore, 2000 service workers at the world-renowned Johns Hopkins Hospital, regularly hit the bricks for an hourly wage increase to a minimum of at least $14 an hour. The union representing the workers, SEIU Local No.1199, has petitioned the state for a head count of how many hospital employees receive public assistance such as food stamps to supplement their low-level incomes. The hourly wage for service workers at Hopkins is a low of $10.71 to a high of $28.

Nobody begrudges success. Everyone knows the numbers by now—70 percent of the new wealth created by the economy went to one percent of the population, with 90 percent of the 70 percent ending up with 0.1 percent of the captains of industry. The disparity is ravaging the economy. No two incidents better illustrate the growing economic inequality in America and elsewhere than the juxtaposition of the masses of fast food and hospital workers with JP Morgan’s coddled stockholders meeting in Florida to approve Dimon’s compensation package.

Another indication of the bitter economic divide is America’s current reading list. It’s not the usual beach-bag of Harlequin romances or formulaic police procedurals. The sold-out leader of the pack is Thomas Pikkety’s Capital in the Twenty-First Century, whose more than 600 pages of data can be summed up neatly: Inherited and accumulated wealth appreciates in vastly greater increments that wages earned by the sweat of your brow. In other words, the rich get richer and the poor get poorer, just as your mother told you.

It’s followed on the list by other populist manifestos: The Price of Inequality: How Today’s Divided Society Endangers Our Future, by Joseph E. Stiglitz; A Fighting Chance, by Elizabeth Warren; Flash Boys: A Wall Street Revolt, by Michael Lewis; The Divide: American Injustice in the Age of the Wealth Gap, by Matt Taibbi; Seventeen Contradictions and the End of Capitalism, by David Harvey; and, almost apologetically, Stress Test: Reflections on Financial Crises, by Timothy Geithner. The conclusion is that the elites are prospering while the working class is being screwed.

Equality (or inequality) is the primal scream of the season—wages, gender, race, workers who go to college and those who don’t and whatever other common denominators fit into the melting-pot blender. The economic and social divide, growing measurably for 30 years since the presidency of Ronald Reagan and the durable fable of trickle-down economics, has evolved as the Democrats’ framework for the 2014 elections—the rest of us vs. Wall Street, America’s corporate casino, or the haves vs. the have-nots, if you prefer.

To that populist formula has been injected the issue of race, fittingly, as America marks the 50th anniversary of the Civil Rights Act and the launch of President Lyndon Johnson’s companion “Great Society” programs. Democrats call it social justice, Republicans hashtag it class warfare.

Politics and economics make perfect partners. As if to underline the point, the Obama Administration dispatched Attorney General Eric Holder and Michele Obama to the commencement circuit to make the case for vigilance against racial discrimination and roadblocks to further civil rights advances. Civil rights these days conflates with economic rights, the original intent of A. Philip Randolph’s 1963 march on Washington for which Dr. Martin Luther King gets recognition.

The outspokenness was a calculated departure for the normally passive Obama Administration on the subject of racial progress. But the new aggressiveness resonates with the broader theme of economic stagnation and social protest. The vast majority of the fast food workers are minorities, the backbone of the emerging Democratic base and the key to a winning turnout in the all-important November elections.

Many employers appear oblivious what’s going on around them. They subscribe to the 18th century-economist David Ricardo’s Iron Law of Wages: As long as there is an abundance of labor, wages will remain at mere subsistence levels. Thus the Chamber of Commerce’s clamor for immigration reform and the importation more foreign workers who are willing to work and live below accepted American standards.

Fully 80 percent of America’s economy is driven by consumer demand and spending. Yet businesses are sitting on a cash horde of more than $3 trillion, either stashing it away for better times or using it for stock buy-backs which are usually huge cash rewards for executives whose compensation packages include large blocs of stock options. (Dimon’s pay envelope included $18.5 million in restricted stock.)

But other pin-striped populists see merit in a living wage. Mitt Romney has come around to embracing the idea of a higher minimum wage. Romney says higher pay is good for the economy as well as the bottom line.

Because of Congressional belligerence toward hiking the minimum wage, the issue has been bucked back to the states with encouragement from President Obama. So far this year, six states, including Maryland, have raised their minimum wages, with now more than half the states requiring higher pay than the federal base wage of $7.25 an hour. Many local governments also have raised their pay levels. However, a number of Southern states are adopting nullification laws which would render invalid any minimum wage hikes enacted by local governments in their states. (State nullification of federal laws in unconstitutional.)

Economics is about money in motion. Idle cash does no one any good. Paying decent, livable wages is not only as American as money but it is also the jolt that the nation’s economy needs. Putting more money in people’s pockets will increase their purchasing power which will create demand which will stimulate investment of all that cash which will create jobs which will increase demand which will bolster profits, etc. As New York Times columnist Paul Krugman puts it, “Your paycheck is my job and my job is your paycheck.”

That’s the way the economy used to work when labor unions sat at the table and made certain that workers got their fair share of corporate largesse. But unions no longer have a seat or a voice in the distribution of wealth since their steady decline over the past quarter century. So workers are compelled to take to the streets in an unusual display of solidarity that has its cause in survival more than greed.

Spokespeople for the workers’ organizations have said the goal of the protests is to humiliate McDonald’s into raising wages and to affect the corporate balance sheets. According to published reports, McDonald’s worldwide profits are down. And in New York, McDonald’s locations were caught cheating workers on their time cards and forced to reimburse the shortchanged hourly wages.

The key question underlying the crusade for higher wages is, very simply, who’s going to foot the bill—the consumer who’ll pay more for a McDonald’s Happy Meal or the government through subsidies to close the wage gap. One way or the other the burden will be shifted away from employers. In either case, fellow taxpayers, you and I will be slipped the tab and the polls say a large majority of Americans support raising the minimum wage.