Holding the Line with GameStop

The fate of the Reddit investors depends on how long they can hold out. 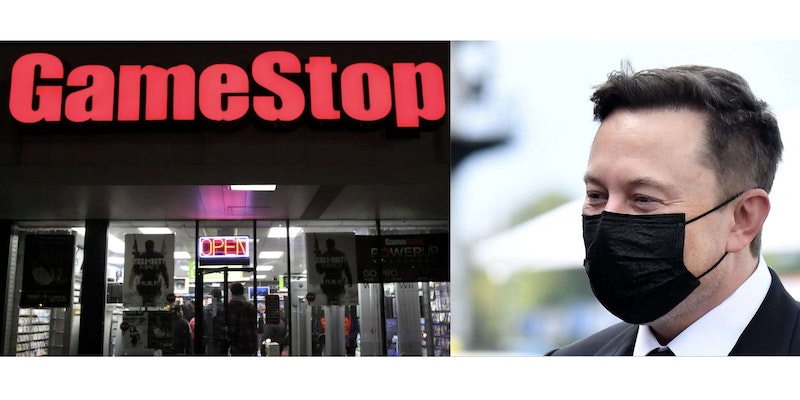 Since 2019, a Reddit forum has devoted itself to driving up the price of video game retailer Gamestop, and they seem to have succeeded, despite the company’s deteriorating fundamentals. Gamestop should be Tower Records of Blockbuster Video. You stream games these days, who buys them at a store? The Reddit pumpers have been so successful that Robinhood, the popular commission-free stock trading platform has cut off some of its traders. CNBC, true to form, is worried about the fate of hedge funds caught on the wrong side of the trade and Reuters reports that the White House is monitoring the situation, on the lookout for potential manipulation of Gamestop’s stock.

Hedge fund Melvin Capital, run by a protege of Steven Cohen from Point 72 and once boasting $12 billion in assets under management, capitulated and closed its short position after it was caught in a squeeze as Gamestop share prices rose 400 percent in a week. Melvin’s management company accepted a cash infusion (bailout) from Point 72 and Citadel, in exchange for Ulster Video, a share of future earnings. Did a bunch of retail investors on Reddit really take down a star hedge fund? Will there be a comeuppance?

Retail investors are often softly derided on Wall Street as “dumb money.” The nomenclature persists despite the frequent failures of professional investors to outperform indexes, not to mention their shameless pleas for bailouts from the U.S. Treasury and Federal Reserve whenever things go wrong. A multibillion dollar hedge fund getting smoked by some wags on the Internet is like the rebels blowing up the Death Star the first time in Star Wars. It’s not supposed to happen.

Ralph S.J. Koijen, a professor of finance at the University of Chicago Booth School of Business studies fluctuations in asset prices from the point of view of who owns what and how they trade. He believes that retail investors have a far greater impact on market prices than institutional investors, despite the trillions of dollars in “smart money” hands. He has calculated that every $1 invested by a retail investor has a $5 impact on stock prices. It’s a function of supply and demand. Individual investors can buy or sell whatever they want. Professionals are constrained by their investment mandates and job preservation.

If a group of professional portfolio managers working for Wall Street banks and public pensions decided to get together to drive up the price of Gamestop to prove a point to some hedge fund, they’d all be fired, even if they made money. Their job is to manage a portfolio within specific parameters, not to fixate on individual securities. Many a portfolio manager has lost clients or a job for deviating from an investment mandate, even when they’ve made money doing so.

The majority of professional stock investors are forced to own stocks in good times and bad. They may seek to outperform the market, or market sectors, but since the market return is their benchmark, they have to own a lot of stocks all the time, which means they can’t sell. Vanguard, for example, owns seven percent of Apple. Vanguard’s strategies are largely indexed, so absent catastrophe it will always own Apple in substantial amounts. If you want to buy a share of Apple, you’ll not likely buy it from Vanguard. Vanguard can’t freely sell Apple. It’s required to own it by the strictures of its own investment rules.

Retailer investors can follow their bliss. They can own stock because it’s Wednesday. They can buy stock in a company just because they want to make a point. Hedge funds get a lot of press for their savvy and power, but it’s all overstated and sets them up uniquely to become victims of a peasant pump and dump rebellion. The total market capitalization of U.S. equities is north of $50 trillion. The total AUM of all hedge funds in the U.S. is just north of $3 trillion (and many of those funds don’t invest in stocks).

The fate of the Reddit investors depends on how long they can hold out. There may well be instant multimillionaires in the Reddit crowd, but they’ll have to sell to enjoy it and their whole enterprise rests on people holding the stock in solidarity. Somebody’s going to sell to finance the purchase of a sports car and that’s when the edifice will tumble.