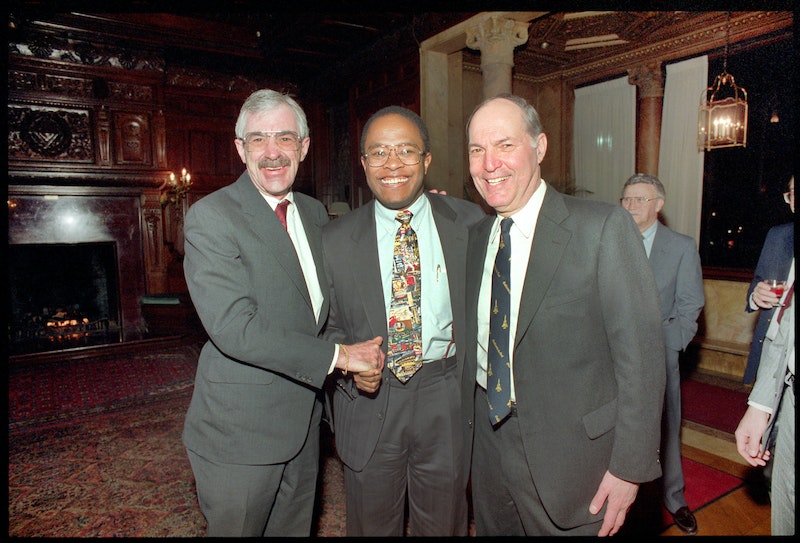 One Wednesday morning in 1986 I was on an errand in Baltimore’s Mt. Vernon neighborhood, a spring in my step, and I noticed a familiar figure in a parked car reading the newest issue of City Paper—of which I was editor and co-owner—and he took one look at me and scowled. The man was Maryland State Senator Jack Lapides—who passed away last week at the age of 89—and he wasn’t at all pleased with a story that was mildly critical of him. At this point I don’t remember the particular article, most likely written by Phyllis Orrick or me, or it was an item included in “RUMP,” a catch-all column that a few writers contributed to (and the model for my own “MUGGER” in New York Press). I returned to our Charles Village office and told Phyllis—with whom I covered local politics for several years—and she let out a snort, saying, “Christ, that was nothing, but I guess Happy Jack isn’t too happy today.” As it happened, we saw Jack after work at the weekly Wednesday “salon” we informally sponsored at The Brass Elephant, and he was anything but perturbed, saying, “There’s my kids! Taking a shot at me.”

Phyllis and I started attending political events in the early-1980s—at a time when the paper was struggling financially, and was thin, maybe 28 pages in a good week—and Lapides, who could’ve brushed us off, like most pols at the time did, was a warm and ebullient man, who took the time to school us about the origins of the squabbles and feuds in the city’s establishment (obviously from his point of view) and after meetings at the Mt. Royal Democratic Club, he’d gab with us.

He presented a verbal chart of “the players,” and at different functions introduced us to people like Harry “Soft Shoes” McGuirk (a South Baltimore legislator/kingpin/political rabbi who was also generous with his time and flat-out hilarious—Phyllis and I crashed his Stonewall Democratic Club’s Christmas party one year and when a rather nasty official told Phyllis it was a “men’s-only club,” she retorted, “I’m not a woman, I’m a journalist.” This creep didn’t buy it, but Soft Shoes intervened, simply saying, “It’s Christmas, and this gal is okay by me!”—State’s Attorney Bill Swisher, Councilwomen Mary Pat Clarke and Barbara Mikulski, State Sen. George Della (also from South Baltimore, a likable fellow who played the inscrutable sage, whispering answers to questions and speaking in riddles), Joe and Mike Curran, the illiterate asshole Mimi DiPietro from East Baltimore’s First District (it was maddening how daily columnists propped up the bigoted DiPietro, depicting him as a local Yogi Berra for his malapropisms), 1983 mayoral candidate Billy Murphy and Northwest Baltimore’s Rikki Spector.

Immodestly, I’d say Phyllis and I were quick on the uptake, and in subsequent election years, we attended function after function, whether it was a meeting at a small church, a fundraiser someone’s home or the endless bull roasts (they were the best, since we could eat and drink at will and no one minded) and we jotted down notes, schmoozed and had a grand time. Weekends were the best time to show up, since Baltimore Sun and News-American reporters were usually scarce and we’d rustle up some unique tidbits for the following Wednesday’s paper. Admittedly, the local Baltimore and Maryland political beat wasn’t always earth-shaking, but we enjoyed it—and later on, when the paper was fatter and turning a small profit, Michael Anft did the heavy lifting for the paper, with in-depth stories that were wholly unique—and it gave City Paper a “news” niche that complemented the arts and pop culture coverage, and, more significantly, the comics, entertainment listings and classifieds (especially the “personals”) that gave Baltimoreans a reason to pick up the paper—or “rag,” as some morons called it.

As described in Jacques Kelly’s obituary (linked above), Jack Lapides was, despite a large circle of friends and associates, a political loner, who didn’t always kowtow to “the rules,” and was sometimes a quixotic figure, who, for example, opposed city funding for sports stadiums, a more common stance today across the country, but back then rubber-stamped by the political apparatus. And there was Jack’s longstanding feud with City Council President Wally Orlinsky (who, in typical Baltimore style, was convicted of taking a bribe for a measly 10 grand; he did time in Allenwood, and wrote a weekly column for City Paper during his brief incarceration; he was later, inexplicably, pardoned by President Bill Clinton), which I understood the basics of, but always knew there were many more layers of skin to that one. The Lapides and Orlinsky families, adding a touch of discomfort at Christmas party time, both lived on Bolton St. in Bolton Hill, which was a weird but very, very Tinytown touch.

The picture above (shot by Jim Burger for The Sun in 1988) shows Della, then-mayor Kurt Schmoke and Lapides an odd trio. Whereas Lapides was loquacious, Della secretive, Schmoke, in my experience, gave very dull and rote interviews, both as State’s Attorney and mayor. But Schmoke was a fascinating figure, first defeating Bill Swisher in 1982 (City Paper endorsed Schmoke, but we remained on very cordial terms with Swisher; he once accompanied several of us on a St. Patrick’s Day pub crawl, and his son interned at the paper) and then serving three terms as mayor. In his first term, Schmoke created a national stir when he gave an address that proposed the decriminalization of drugs—not legalization—that, in the Reagan era, was poorly received. It was a courageous stance, and prescient, but while it didn’t hurt him in Baltimore, it probably killed any statewide or national political aspirations.

I last saw Jack Lapides and his lovely wife Linda more than a dozen years ago—after my family had moved back to Baltimore from Manhattan after 16 years—at a holiday party held at our Guilford home. He was older, of course, but no less joyful, bringing a bottle of wine, and, seeing some old friends, said “There’s my kids!”