A revolt of the masses has begun. How will world's masters react? 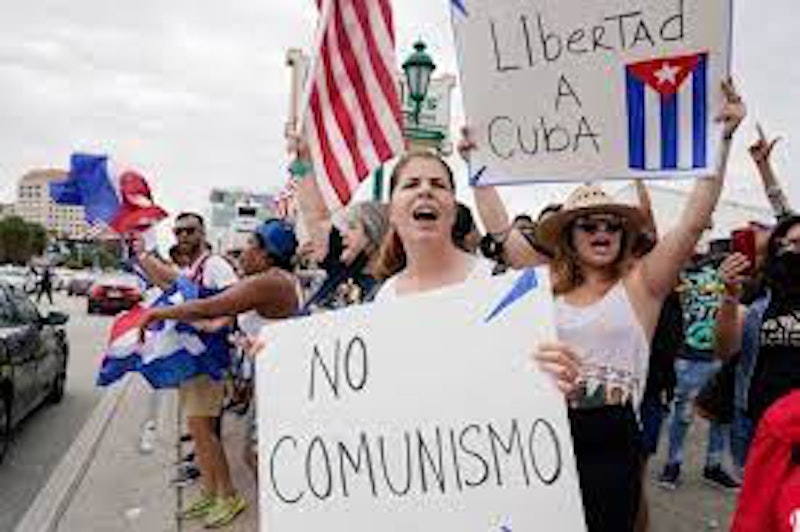 The fraternal order of a police state faces a revolt of the masses. The masses refuse the wretchedness of a fraternity of the dead, of rule by the successor to Raul Castro, and of threescore and two years of misrule due to Fidel Castro. Free of liberty and equal in poverty, the masses are a sea of humanity beside a teeming shore, yearning to breathe free. If our own government wants us to see something else, so as to have us ignore years of incompetence and decades of bad intelligence, we must maintain our focus. We must not look away, obeying our government as we obey God, lest we be consumed.

To look away would be to betray the Cuban people, not for the first time, allowing them to be swept away as our government sweeps away the truth. The ending would be a joint victory for the enemies of democracy, at home and abroad, clearing the streets of Havana while cleaning them with the blood of innocents; finishing the work of cowards, and closing the books—foreclosing our freedom to access the books—concerning the longest and closest (by 90 miles) big disaster of American foreign policy.

According to President Biden, the Cuban people seek relief from the tragic grip of the pandemic. What the president fails to see is that what plagues Cuba is a man-made pandemic, not Cuba’s death toll from COVID-19. What the Cuban people reject is what all freedom-loving people denounce: the tyranny of lies.

The lies are as big and broad as the seawall in Old Havana, and as old as all the walls of a dead empire. The lies run wide and deep, such that Havana, the City of Columns, looks like a city in ruin. The lies line the columns, revealing cracks in stone, just as lines mark the wooden cobblestones. All lines to the past are past, from the remains of the cathedrals to the remnants of the Spanish to the relics of the French to the richness before the fall.

The lies bear witness to the failures of America, too, starting with the words of the first president born in the 20th century. His acts give the lie to an alliance for progress and a pledge to oppose aggression or subversion anywhere in the Americas. His rhetoric summons Americans to bear the burden of a long twilight struggle, while his record resounds with retreat: ending, as it began, not in the cold but in a conflict of the Cold War; ending not in the snow but in the sand, upon the sands of surrender; ending not in a beachhead of cooperation but in a jungle of suspicion, contradicting the letter and spirit of his inaugural address.

Here lies the Cuba policy of John F. Kennedy, the 35th president of the United States. Here lies a fiasco, wrapped in evasion, inside a quagmire. Here lies the defense of lies, courtesy of the special assistant to the president.

And now the man who plagiarized President Kennedy is president. The 47th vice president of the United States is now the 46th commander-in-chief. But President Biden seems to comprehend little of what he commands, which is also true of his cabinet secretaries, while the director of the agency with the most to lose, whose losses are a study in failure, is not a member of the cabinet. Such is the case of the CIA.

What about our man in Havana, Timothy Zúñiga-Brown? Where is his long telegram to the State Department and the people of the United States? Where is his missive, as chief of mission, establishing his worth? Where is his predecessor’s warning from May or June, about a probable uprising in July?

The questions answer themselves, for we have the government we deserve.

As for the Cuban people, they deserve a government better than our own.