You can run America or you can sell it. But you can't do both. 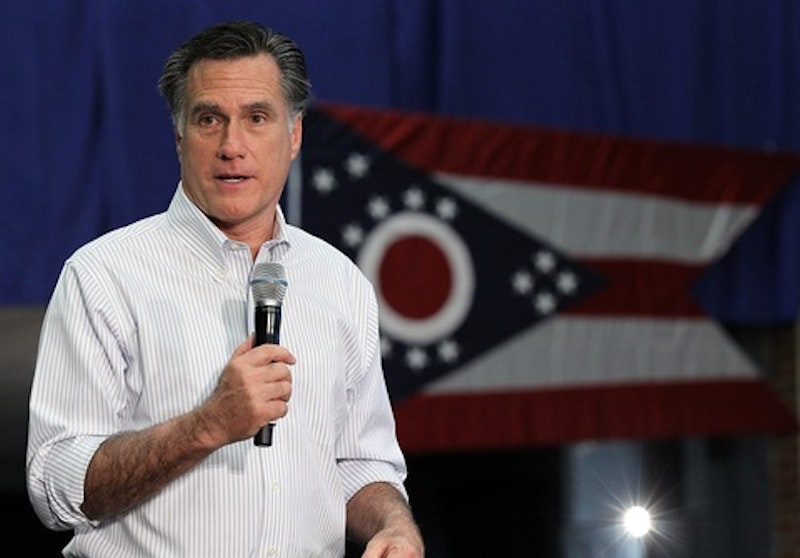 If money were a country, Mitt Romney would be a patriot. People used to talk about Obama as “post-American.” Romney's money is post-American, and his money is his one great achievement now that MassCare is inoperative as a campaign boast. I made that pile, Romney tells voters, so trust me to get the economy going. Technically he's boasting about his business career, about being a “job creator.” But his business wasn't the creation of jobs; it was the harvesting of money. His company performed that function so beautifully because it treated America as a way station, somewhere that jobs and money traveled through on the way to someplace else.

Those who know say Romney was a great man in business. He showed private enterprise the new path: Blow everything away. A factory disappears in Kansas City and money gathers in an account tucked someplace hospitable somewhere on the globe. Of course, swaths of the population now creep about, homes gone, naked on the plain. But anybody who likes the new landscape owes Romney a vote—he set the hurricane going.

Right now the Romney campaign and the Obama people are debating when he stopped running Bain Capital. Obama's ads point to times the company sent or helped send jobs to China or Mexico. Romney says he wasn't around when those transfers happened; he was busy running the Olympics and had nothing to do with his old company.

At the time, though, he made it sound different, as if he were keeping a hand in. Those bits, which include SEC filings, have come to light and we now have a typical Romney situation, with a lot of hemming and hair splitting. “Retroactively retired” was the term used by a Romney surrogate, the normally smooth Ed Gillespie. The phrase is the sort of clinker that you used to hear from Democrats: “didn't inhale,” “dares to be cautious,” “for it before I was against it.” Now Romney is the man trying to explain himself away, to apologize for what he is. That used to be Walter Mondale's job.

The story laid out by the Romney team is plausible, but plausible in the same way as Sarah Palin's pregnancy account. Accept that the principal actor is a nut (in Palin's case) and everything falls in place. In Romney's case we just have to accept that the principal didn't know or care what happened to anybody lower down life's food chain, which meant everyone outside the boardroom. He wasn't going to look into the latest businesses being bought up and shut down. He would just collect his share of the profits, plus $100,000 or more in salary. An ex-partner helpfully adds that Romney's main purpose in staying on as titular owner was to negotiate his exit payment.

Romney's father, the man who ran a car company, showed the public 10 years of tax returns when he ran for office. Nowadays most politicians do the same. Romney the venture capitalist will just show the ones from last year and the year before. It looks bad, but not as bad as tax dodges in Switzerland and the Cayman Islands, or a figure for exactly how much Bain Cap put in his pockets while it was generating material for Obama attack ads.

In a way it's all a comedown. Money is supposed to be Romney's selling point, what makes him worth the voters' time. Instead the poor man has to hide what he is. Romney and the business right are slowly discovering that they are not lovely. The country doesn't like what they've done, and it shouldn't. Mitt Romney wants to be president. But unless he runs America, the place doesn't mean very much to him.