Censoring The Critique Of Power

Chris Hedges' latest book, Death of the Liberal Class, is a troubling look at how respected news organizations like The New York Times ignore leftist thought. 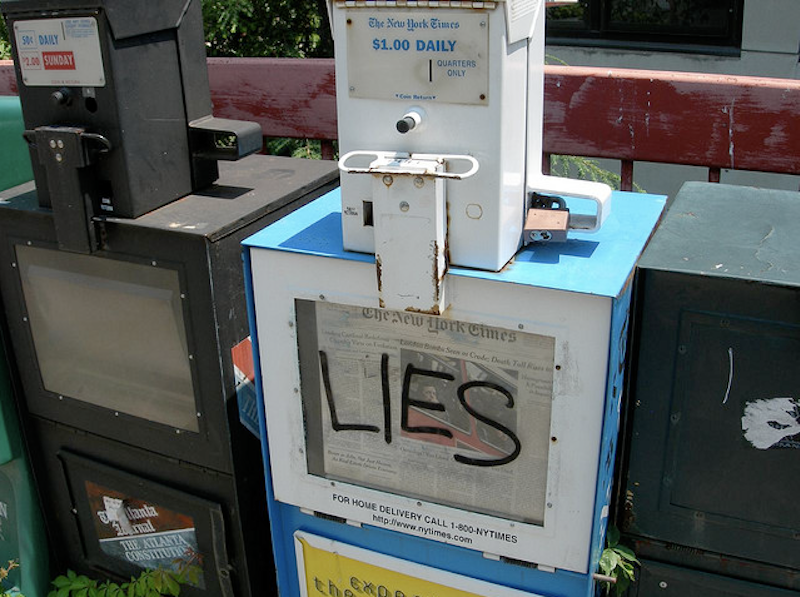 In his latest book, Death of the Liberal Class, Chris Hedges argues that all the important liberal institutions are complicit in the corporate takeover of America and have thereby rendered themselves useless. He points to the Democratic Party, which long ago sold itself out to Wall Street and has mainly produced politicians like Bill Clinton and Barack Obama who serve their corporate masters rather than the American people. Next is the for-profit university system, which relies heavily on donations from the power elite, preaches free market dogma in the economics department, having banished Marx to the humanities or oblivion, and encourages students to drown themselves in debt and serve the corporate system by working on Wall Street. And, finally, the liberal media, which is almost entirely owned by the few corporations that control most of the information and effectively censors itself by silencing or discrediting liberal thinkers like Noam Chomsky who are truly committed to critiquing power.

Hedges devotes many pages to The New York Times. He worked there for years, winning a Pulitzer Prize in 2002. But he was expelled after he spoke out against the Iraq War at a commencement address in Rockford College in 2003, warning that “Blood will continue to spill—theirs and ours—be prepared for this…  we will not rid the extremists who hate us with bombs. Indeed, we will swell their ranks,” and “Iraq was a cesspool for the British when they occupied it in 1917. It will be a cesspool for us, as well.” The crowd booed Hedges offstage and the Times issued a reprimand condemning his “public remarks that could undermine public trust in the paper’s impartiality.” Hedges points out that people like colleague John Burns, who made public statements in support of the war and the general myth that America is spreading freedom and democracy, faced no repercussions.

Death of the Liberal Class puts forth other examples of how the Times serves corporate power. Sydney Schanberg wrote a column during the 80s exposing the ways in which powerful real estate developers in New York, such as Donald Trump, abused the poor. He was fired because those he wrote about had connections at The Times and did not like what Schanberg was reporting.

And then there’s Chomsky. Hedges contends that during the 1970s, editor Abe Rosenthal “banned social critics such as Chomsky from being quoted in the paper” while working to marginalize Ralph Nader. In general, Hedges explains that the Times, like most of the “liberal media,” censors itself by discrediting true liberals who relentlessly critique power. Nader was one of the top whistle-blowers in the country before Rosenthal silenced him. And Chomsky is one of the few critics who dare to spell out the scope, intent and cost of American empire. As such he must be marginalized by the corporate media, whether in the form of FOX News or the Times.

As a subscriber to the Times I naturally found all this extremely unsettling. Before reading Hedges I considered the Times a reliable watchdog.

Nevertheless, after considering Hedges’ opinion that Chomsky is our greatest intellectual, one of the few dissidents who always challenges power, I read Chomsky's latest book, Hopes and Prospects. It is brutally critical of Obama and filled with revelations such as that “Israel’s 1981 attack on Iraq’s nuclear reactor did not end Saddam’s nuclear weapons programs, but initiated it,” according to Iraqi defectors working at the plant and nuclear physicists who inspected the location after the attack.

I fact-checked some of his claims. Chomsky’s scholarship and research is extraordinary. He supports nearly every fact with ironclad sources that one can easily look up. For example, here is one of the many sources he cites about Israel’s 1981 attack on Iraq.

Then I checked out the Times’ coverage of his career. What I found is extremely revealing. The very first article I read is a review of Chomsky's classic, Hegemony or Survival, titled "The Everything Explainer." The reviewer accuses Chomsky of employing "falsehoods with exaggerations." One example she points to is Chomsky’s claim that President Clinton “was flying Al Qaeda and Hezbollah operatives to Bosnia to support the U.S. side in the ongoing wars.” The reviewer alleges that Chomsky “doesn’t adequately back up” this “far-fetched” claim.

Who’s telling the truth? This was pretty easy to settle. In Hegemony, Chomsky cites an article by The Guardian about a Dutch inquiry supporting his charge that Clinton did indeed implement an Iran-Contra-like deal even though Al Qaeda had started attacking America. And for those of you who consider The Guardian an unreliable source, here’s the report. Another Times article argues that Chomsky “evades the complexities of the world as it is,” and in another piece the paper says he “exaggerates.”

This confirms Hedges’ contention that the mainstream liberal media is merely another face of the corporate structure and censors itself. In systems of unchecked capitalism, those who should challenge power have strong incentives to do the opposite—such as maintaining access to people in power and securing advertising revenue—and instead preserve the status quo by pushing “manufactured consent,” as Chomsky calls it. Hence, they demonize our official enemies—Saddam, Iran, North Korea, Hugo Chavez, etc.—and often ignore our own crimes (Clinton’s use of Al Qaeda in the Balkans), downplay their severity (as in the case of supporting Mubarak) or justify them (consider the Iraq war) in an effort to promote “American exceptionalism.”
Now, taking the leap from accepting the mainstream media’s viewpoint to Chomsky and similar critics is dramatic and extremely disillusioning. It implies that much of what we’re told is at worst lies and at best often misleading. It can also be depressing since it means that America has not historically served the world as a force of good—most of the diplomatic terminologies we hear are in fact sinister euphemisms.

So the obvious questions are does this mean that everything we hear is a lie, and that America is an evil empire and a terrible place to live? Not at all. The Times is not worthless just because it serves American and corporate power by leaving out crimes and obfuscating certain truths. It still contains some valuable journalism—well-written pieces that proffer a general picture of world events that are often based in fact. Chomsky, Hedges and Schanberg all read it and contend that it would be a great loss if the Times went out of business. But we have to be skeptical. And we must bear in mind whom it serves, the U.S. government and corporate structure, and which audience it caters to—rich white people.

As for empire, American foreign policy has historically been brutal, driven by blind greed, racism in many instances, and the need to assert dominance over others in the conquests for resources and military superiority, from committing genocide against the Indians to subjugating countries in Central America and the Middle East (let’s bear all this in mind when we evaluate the motives behind the Libya intervention). But we live in a free society—we really do have rights, such as free speech and due process. These have been eroded at times, particularly in the case of the blacks during slavery (and arguably till the present, albeit in a different form), Muslims today and more generally with the draconian post-9/11 crackdowns implemented by Bush and upheld by Obama.

Nevertheless, we enjoy greater freedoms than most, and as Chomsky said in an interview with the Times, “We live in a free society, and privilege confers responsibility.” As his massive body of writing illustrates, this responsibility entails relentlessly criticizing power; assuming that those in charge have ulterior motives when they describe themselves as deliverers of democracy; and helping the oppressed by educating the public about how we can change the system for the good. When Chomsky said in the interview that he has never considered leaving America because “this is the best country in the world,” he was not making an empty pledge to the flag. This is true patriotism, despite of his detractors’ accusations that he “hates America” because he speaks critically about empire and the corporate structure. Indeed, as Death of the Liberal Class shows, although the future looks extremely bleak, citizens can change the system only by understanding how it works and being willing to critique our own society.