American Factory: A Bleak Look At the Future of Globalization

The culture clash that happened when a Chinese manufacturer opens a plant in Ohio. 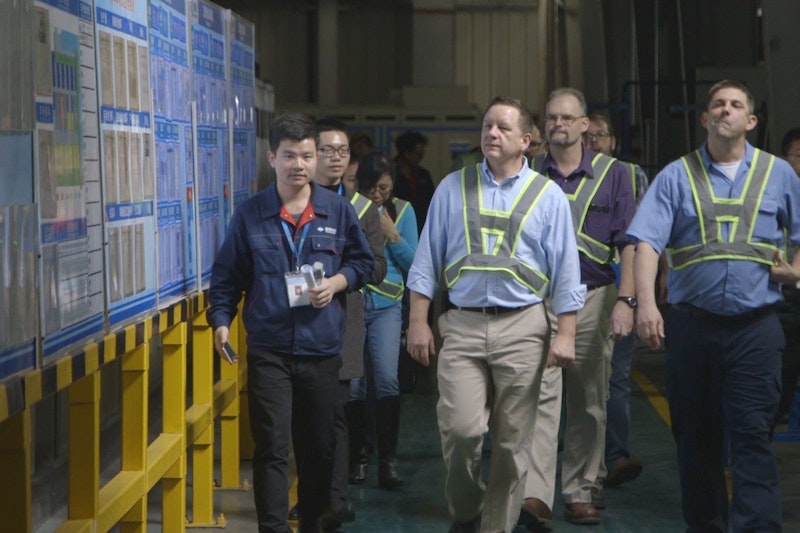 The new Netflix film, American Factory, begins on a down note. In 2008, a General Motors plant in Dayton, Ohio is closing, which will end 2400 jobs. But the documentary’s mood quickly turns upbeat as it skips ahead seven years into the future when a Chinese manufacturer of windshields, Fuyao Glass, purchases the factory and hires American workers to work alongside imported Chinese employees, breathing new life into the decimated community. But the optimism’s fleeting. The remainder of the movie’s a stark reminder of Rudyard Kipling’s words: “East is East, and West is West, and never the twain shall meet.”

The deterioration’s a long, gradual process that, given what you've learned after watching the film, seems preordained. Verité filmmakers Steven Bognar and Julia Reichert (The Last Truck: Closure of a GM Plant), with the first work from Barack and Michelle Obama's Higher Ground Productions, initially offer some scenes of hope. Things look fine at the Thanksgiving feast an American Fuyao employee invites a bunch of his Chinese co-workers to. They're doing target practice with his firearms in the backyard, and riding on his Harley. But doubt soon creeps in when a Chinese supervisor says of the American workers, “They're pretty slow, and they have fat fingers.” The “fat fingers” part has a bad ring to it, and the sentiment echoes throughout the film.

A Fuyao worker who used to make $29 per hour at the GM facility explains, on camera, how her life’s changed now that she's making $12.84. A large sign reading “Marching Forward To Be World Leading Automotive Glass Provider” appears in the lobby of the plant, and American workers are shown commenting on its grammatical flaws. The message is the Chinese execs couldn't be bothered with running it by a native English speaker in advance.

Developmentally, China resembles pre-union industrial America, so expecting Fuyao to be a good fit in Dayton was always a pipedream. American workers had to suffer and fight hard for decades to get concessions on basics like workplace safety, but at Fuyao they find themselves within a culture that places little value on the individual, and pays accordingly. When the film moves to China, a couple of American employees who Fuyao had sent there for training are appalled to see a Chinese worker picking up piles of broken glass without safety gloves. Labor law isn't a concept that's caught on yet in China, and their “labor unions” work for the benefit of the communist state.

It's striking how much access Fuyao, owned by billionaire Cao Dewang (“the Chairman”), granted to the filmmakers. Indeed, there may be regrets now that an unfair labor practice claim was filed one day after the film’s release on August 21. One of Fuyao’s Chinese supervisors in China feels free to tell an American employee, on camera, “You guys have eight days off every month. That's an easy life. They [Chinese workers] only have one or two days off for a month. American workers are lazy. It's just your nature, but you're not bad.” A Chinese executive in Dayton states that a union-favoring American employee, whose picture he holds up, will be gone within two weeks.

Things get interesting when the filmmakers move to China, which is what’s needed to provide context for what’s happening in Dayton. We get a glimpse of obedient Fuyao employees singing a motivational song about making windshields: “Noble sentiments are transparent. For the sake of transparency, we've gone through difficulties. For the sake of transparency, we’ve struggled every day. China is filled with spring, and happiness is everywhere.” Everywhere, presumably, except for the factories that are pushing Chinese workers to suicide with brutal working conditions. It's chilling to see the earnest looks on the workers’ faces as they dutifully sing.

When the handful of American workers from Dayton who were brought to China were taken to the factory and exposed to militaristic exercises on the shop floor, they can't hide their lack of enthusiasm. Watching this, and the following segment on the corporate New Year's party where performers sing songs with worshipful lyrics about Fuyao, you're left wondering how anyone could have ever have dreamed that such a culture gap could ever be bridged. You wonder how a Chinese worker, after finishing one 60-hour work week and pondering the next one, really feels when they don't have to present the facade of a chirpy cog in the wheel who lives to improve the efficiency of their factory.

What’s going at Fuyao is a failure to communicate. One of the American supervisors who made the trip to China tries to institute some of the militaristic practices he'd seen there back in Dayton, but he fails to show them why they, as Americans, should go for that so his plan flops. An angry American worker rages about the weird film loops of cute young Chinese children that play continuously in the factory. Other employees are disturbed over Fuyao’s lack of appreciation for their safety, but their concerns aren't addressed—safety complaint after safety complaint is filed. A labor union would fix this situation, but the Chairman says he'll close down the plant if his workers unionize, which is a violation of the National Labor Relations Act.

“We need to use our wisdom to guide them [American employees] and help them,” says a Fuyao executive to a roomful of Chinese employees. “Because we are better than them.” That sums up the American Factory story in a nutshell.

This film, which has a low-key, observational tone, is a bitter farewell to a past when blue-collar workers were squarely in the middle class, and a reminder of what globalization has in store for them. Near the end, a Chinese executive says to a room of American employees, “Let's make American (sic) good again.” If American workers need firms like Fuyao to make them good again, their prospects look bleak.