How does an idealistic young American maintain objectivity when discussing Barack Obama with his French students? 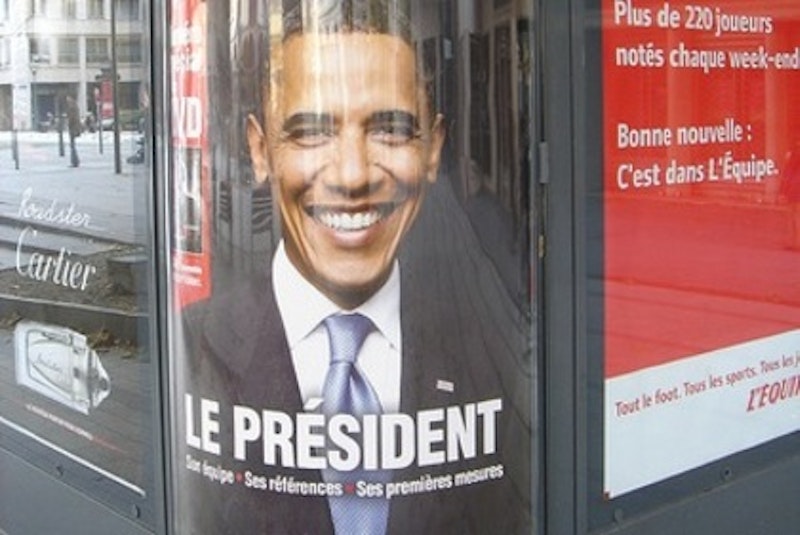 Two months ago, while John McCain and Sarah Palin were firing up rabid crowds with words like "terrorist" and "socialist" and Barack Obama was still addressed as candidate Obama, I was awkwardly silent in a high school classroom in France. I had just recently moved here to teach English in a vocational school in the small port city of Sète. Despite a steady flow of Anglophones and European tourists, the town feels rather isolated—there are certain words that only exist in Sète, a local cuisine that pays homage to the working-class Italian residents who first settled here, and an accent that would drive any French beginner crazy. But, as was the case with seemingly every corner of the globe, the Sètoise community and especially the students at my school were no strangers to Barack Obama. In every class, kids were bubbling with curiosity about my thoughts on Obama and whether he'd win or not. And ironically, I was told not to talk about it.

As it was put to me by one of the regional coordinators, language assistants must follow the same regulations enforced for schoolteachers. That includes addressing political matters with a certain even-handedness—essentially an extension of the foundation of laïcité, which separates religion and government. Any presentation on Obama thus had to be followed by a similar presentation on McCain. So in my first day on the job, when all anyone wanted to talk about was how excited they were at the prospect of a black American president, I responded with objective commentary devoid of all personal political opinion. And you better believe that killed the kids' enthusiasm.

What was most confounding about the whole thing was the program's fear that an opinionated outsider would provide an unbalanced image of their home country. They preferred that we give a textbook-style survey of a whole set of ideas and beliefs, and let the kids craft their own opinions. What they overlooked was the fact that the Obama craze had already created an imbalance of information. Most kids here know very little about American geography. Washington, D.C. and Washington the state are the same thing. Hawaii is near Cuba and the drive from New York to Los Angeles takes about 10 hours. Through shows like CSI, they could point out Miami and Las Vegas on the map. But there was one other place they recognized: Chicago.

When we talked about the Civil Rights movement, very few people could tell Martin Luther King Jr. from Malcolm X. Similarly, Rosa Parks was just a name without context. But sure enough, when the name Jesse Jackson surfaced, kids began to address his critical comments of Obama and the much more complicated issue of the African immigrant experience versus the African American slave experience. It was astonishing. Here were kids who thought that Lincoln was a figure from the 1960s, yet in the same breath could easily and intelligently discuss the importance of Michelle Obama's ancestral roots in connecting Barack Obama to a black community that he otherwise isn't a part of.

And then there was John McCain. About 60 percent of the kids believed that he was in some way connected to the Canadian brand McCain french fries. Aside from that, he was a mystery. No one could say what his job was before, or where he lived. They correctly assumed that he was rich, but that was the extent of their knowledge.

My neutrality lasted about one week. The concept of being on the sidelines during the presidential campaign was too much to bear. First of all, how could I suppress my excitement for Obama when my political experience has been exactly eight years of President Bush and one 2004 vote against him. I'm reminded of this every time I read a column about the so called "disillusionment" of liberal Obama supporters who will apparently be disheartened to find out that the Obama presidency will be more centrist than they expect. A lot of those liberal voters are young people who have never had a president they've voted for. On my part, there are no grand expectations of a radically progressive agenda, but rather the simple demand that Obama appoint intelligent people and look on to other world leaders and cultures with respect and not some smug sense of superiority. When Obama says that he's embarrassed that more Americans don't speak Spanish or French, it isn't a liberal complaint. It's painfully common sense.

The other, more important factor was that speaking about Obama automatically created a dialogue and sense of common ground between the students and I. How could they really get excited and explore issues if I wasn't talking freely with them? And I wasn't alone in shifting toward favorable discussion about the Democratic candidate. Some of the teachers at the school were planning a full lesson plan for after the election, and there was absolutely nothing prepared for John McCain.

Since November 4, talking about Obama has become both easier and more difficult. I no longer feel constrained in any way. Hell, I'm almost obligated to talk respectfully of the guy since he'll be our next commander in chief. But, there does remain the impossible task of explaining to kids why he doesn't officially take office until January. Add it to the Electoral College and other American political procedures that don't make any sense to foreigners, let alone Americans.

I'm still just finding my groove in Sète and need to continue to develop relationships with my students and fellow teachers. But there's already a clear contrast between this experience and the last time I was in France. Three years ago, while I was studying in Paris, I was bombarded with the same sentiment from everyone I met. Each time I introduced myself, it was usually followed by, "Man your president. What a fucking dick, right?" Now, it's different. Bush elicited pity and disdain. Obama sparks conversation.