Before MAGA, Ultra-MAGA, and Dark MAGA

I’d swear I remember other factions existing on the right. 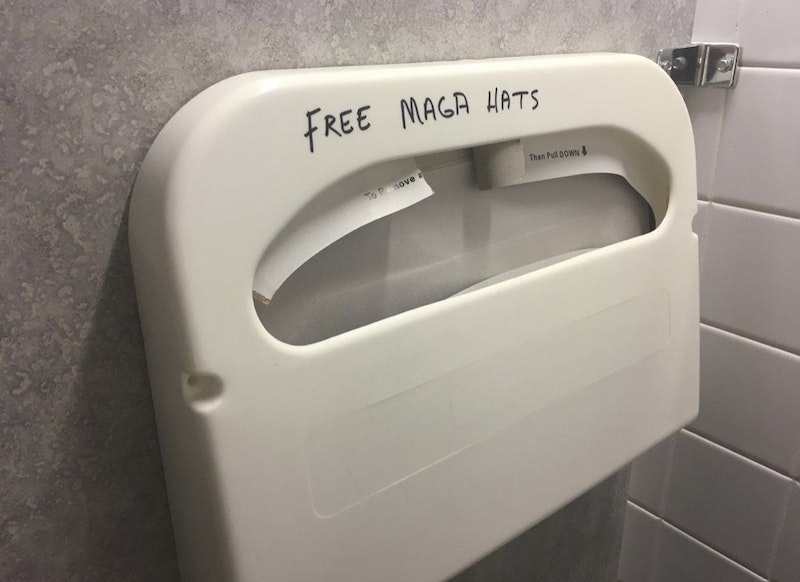 Santayana said, “Fanaticism consists of redoubling your efforts when you have forgotten your aim.” The right seems determined to prove it these days, spending little time articulating precise principles—aside from a few very crude proxies for principle, such as loyalty to Trump or dislike of Latino immigrants—but nonetheless a lot of time sparring over who’s most committed to the cause, whatever the cause now is. Perhaps instead of a free country, the goal is merely a country that is free of Mexicans.

A willingness to use barbarous methods, from street fights to punitive tax code-tweaking, is a great way to show your bona fides in this environment, rational arguments less so. This affects more than just Republican primary results. Now that fear of Covid is letting up and actual face-to-face gatherings of like-minded political people are beginning to happen again, there must be a fair amount of unease among conservatives about how to spot allies in a social setting and thereby avoid some ugly argument breaking out.

There was a time, a mere decade ago, when you could go to some conservative event and assume everyone, no matter how eccentric, thought of themselves as in some sense “part of the family.” Whether your inspiration was Jesus, Adam Smith, or some far more obscure motivator, you knew you’d put up with each other for the sake of maintaining the coalition and the cocktail party—the party and the party, so to speak.

However, as in many other post-Covid social settings but more so, there must now be conservatives out there eyeing each other warily, wondering, “Wait, are we still on the same team, or is that guy I haven’t seen in four years going to do something nuts in an effort to prove he can ‘out-MAGA’ me now?” and “Is this our team or have I wandered into their team—and how do I tell nowadays?”

This primary season has seen people, some of them running for office—without outlining any precise philosophical agenda—declare themselves level-headed establishment types, while others (terrified of losing grassroots support) wanted to sound at least MAGA-tolerant, truly MAGA, “ultra-MAGA” (as Biden amusingly put it, immediately seeing the term coopted with pride by some Republicans), or in the more extreme case of despairing and embittered young Rep. Cawthorn after his primary defeat, “Dark MAGA.”

That was Cawthorn’s non-ironic, Star Wars-like term for the angry, vengeful, Trump-like populist forces that will rise up against the political elite if the elite keep successfully primarying the MAGA and ultra-MAGA candidates, such as the interesting but now defeated Senate candidate Kathy Barnette in Pennsylvania, for whom I was briefly rooting, if only because it would’ve been delightfully stereotype-destroying for the Senate’s third black female ever to be a right-wing conspiracy theorist. If Cawthorn doesn’t write a tell-all book, orgies and all, about his short time in DC and call it Dark MAGA, I hope Barnette uses the phrase, with greater irony, as a comeback campaign book title one day. (Sidenote: I often work as a ghostwriter.)

In contentious past conservative settings, there were at least more interesting principles at stake than the frat-like impulse toward one-upmanship-for-no-reason. I was on a CSPAN2 panel 12 years ago that’s remembered more for personal bickering than its political content—and yet, even that panel, by happenstance or design, was a good philosophical sampler of the four circa-2010 conservative factions, having (roughly speaking) a neoconservative moderator plus a paleoconservative panelist, a just-plain conservative one (religion and family, that sort of thing), and me, the libertarian. Remember those factions? They seem quaint and high-minded now, for all their collegial disagreements.

Since then, with a lot of help from social media, the whole political spectrum, not just the right, has seen great fragmentation—or diversification, to put it in more positive terms, and indeed the proliferation of niches is mostly good in a world that tends to be at its worst when thinking “one size fits all.” But something stranger and more painful than mere fission has happened on the right, a sort of deformation of each of the four factions who were represented on that CSPAN2 panel into a faction defined at least in part by its reaction to Trump or Trump-ish political trends.

In the order the four were listed above—and stated very roughly—at least some of the neoconservatives have evolved into a centrist “Never Trump” de facto extension of the Democratic Party while still loving the military; the paleoconservatives lost their high-culture pretensions (and memories of how economics works) and largely blended with the market-bashing Trumper populists; the conventional conservatives put God and virtue on hold to a surprising extent to support their rude and crude political hero; and we libertarians did something more complicated but still embarrassing.

That last faction, I’d argue (having observed them most closely), simultaneously distanced themselves from the right (I honestly forget to think of libertarians as in any sense part of the right-wing coalition these days, just as they ceased back in the 20th century to have a place in a left-wing coalition) but tragically replicated inside the libertarian movement all the insane, distracting divisions that exist in the broader, non-libertarian spectrum—divisions over immigration, race relations, online etiquette, foreign relations, extremism vs. moderation, and so on.

I fear fighting over the same, mostly insoluble issues that the broader political culture does will leave my fellow libertarians too exhausted effectively to make their own unique contributions to political culture, especially shrinking government and enforcing property rights.

That’s a shame, since at the same time libertarians are dividing over numerous topics not directly related to property rights, the rest of the political spectrum seems to be increasingly conscious of being united in its dislike of markets and libertarians. There are so few of us, with so little influence over the policies of governments around the world, especially in the past two years, yet I begin to suspect we’re going to get the blame for everything big governments and a fragmenting culture have done wrong for the past half-century or so, even though almost all of it happened over strenuous libertarian objections.