Down For the Count: Obama's Enablers Are Terrified

My own advice to the President: ignore Michael Tomasky. 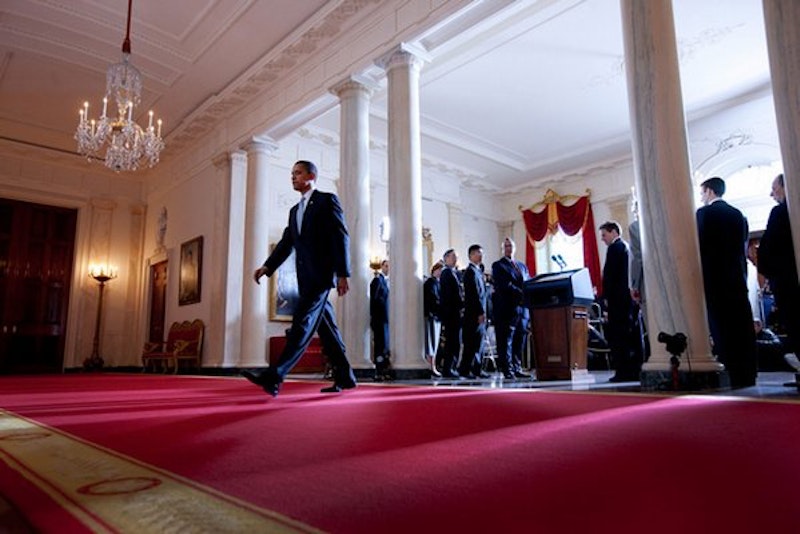 It’s a curious turn of events, at least from just three months ago, to see President Obama’s mass of media cheerleaders—enablers is the harsher, and perhaps more accurate term—flipping their wigs in print and online over the possibility, once unimaginable, that their modern-FDR might actually lose to Mitt Romney on Nov. 6. (One notable exception is The New Yorker’s resident ostrich Ryan Lizza, who this week published a very lengthy piece about what to expect from Obama’s second term. A lot on climate change, and maybe immigration reform, says Lizza. And incidentally, The New Yorker, famous for its punctilious fact-checking, let one of Lizza’s whopping mistakes stand, even in the online version: he said that Bill Clinton won reelection in ’92, rather than ’96. Make of that what you will: to me, is says that even this still prestigious weekly has given in to the “fuck it, mistakes don’t matter that much” attitude adopted by the media in general.)

The subject for today is Michael Tomasky who, by day, shills shamelessly for Obama at The Daily Beast/Newsweek nightmare, and by night (I assume) reverts to his more thoughtful essays for The New York Review of Books. Tomasky’s a smart fellow, and I suppose the lure of the dosh that Tina Brown’s backers provide at the Daily Beast leads him to dash off Obama talking points, no matter the damage to his professional reputation. It’s a living, and I can’t knock Tomasky for successfully putting whole-grain bread on the table, but his naked hackwork makes you think he’s running for president.

In any case, Tomasky’s latest column—no doubt he’s tapping out another as I write—is 800 or so words of advice to the President, a “foolproof plan,” he says, for whipping The Mormon From Bain. Boiled down, Tomasky’s winning strategy—forget the economy (he doesn’t even mention Europe’s ongoing meltdown and its implications for the U.S), this is purely political—is that Obama caves in to the GOP by extending the Bush tax cuts for a year. He writes:

Obama should go to Congress and say: “I offer you the following deal. I will extend all the Bush tax cuts for one year—yes, even for the wealthiest Americans. One year. In exchange, I’d like you to agree to fund the initial, startup $10 billion for the Kerry-Hutchinson infrastructure bank, and the $35 billion I asked of you last September in direct aid for states and localities to rehire laid-off teachers and first responders. Then, after I am reelected, my administration and I will take the first six months of 2013 to write comprehensive tax reform, and Congress will then have six months to pass it, and we’ll have a new tax structure that we’ve both agreed on.

The beauty of his idea, Tomasky says, is that the GOP will never accept this deal, and so Obama can successfully demagogue throughout the fall about the greedy, rapacious and allegedly criminal behavior of the Wall Street and corporate crowd. Bingo! Reelection assured!

It’s possible, though I doubt it, that some shard of this scheme might’ve had traction in February, but in today’s political environment (talk about global warming!) it nears the absurd. First, as Bill Clinton said—before he was waterboarded by Obama campaign officials—extension of the Bush tax cuts is a necessity, and will probably happen anyway. And even if Obama refuses to budge on his ideological and symbolic screed of class warfare, most people who’d be affected by the higher taxes have had plenty of time to prepare—that’s why tax lawyers and accountants aren’t feeling the recessionary pinch of other industries. Second, while polls show that Americans—the number varies from day to day in our poll-every-12-hours society—don’t approve of lower taxes for the wealthy, when they cast ballots in November that’s not what they’ll be thinking about. Rather, as the cliché goes, citizens vote their pocketbook, and if it’s empty the incumbent is not in good shape.

It’s mid-June and today’s general assumption of a tight election might not hold by Election Day. The conventions haven’t yet been held, Romney might defy his always-play-it-safe character and pick a Palin-like nut as his running mate, and Lord only knows how Obama will acquit himself in looming international crises. That could go either way. Nevertheless, Obama remains oddly detached from political reality, and unless Davids Axelrod and Plouffe bomp him on the head, he could blow it. Democrats hold onto the hope that the President will best the stiff Romney in however many debates are held this fall, but they forget that the media has already declared Obama the favorite in those encounters and unless Romney commits a Jerry Ford-like gaffe, all he has to do is hold his own and it’ll be a wash.

President Obama is receiving advice from more “experts” than he’d care to. My assumption is that if his aides hand him blogs from the likes of the Daily Beast, he’ll ignore them, and with good reason.