A Broke and Broken America 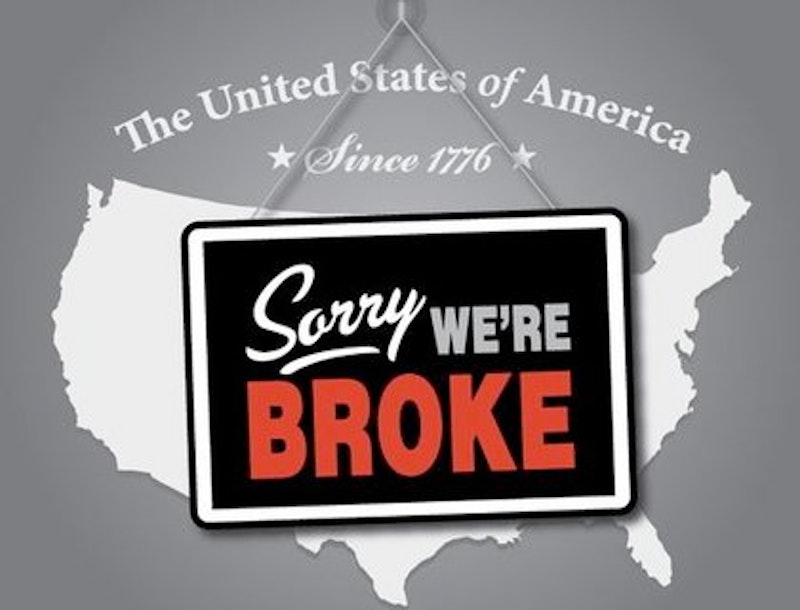 As a nation, America’s broke and living on borrowed money. As individuals, Americans are in even worse shape. They’ve lost nearly 40 percent of their wealth over the last 20 years because of devalued real estate, stagnant pay checks and an underperforming stock market. But the real crisis is a lack of action: All we’re getting are lectures on navigation while the ship is going down.

The Federal Reserve study, as reported in The Washington Post, showed that “the median net worth of families plunged by 39 percent in just three years from $126,400 in 2007 to $77,300 in 2010.” The bulk of that loss was in real estate. A house is no longer an investment and a way to accumulate wealth. It is, simply, a house and, at least for a long while to come, no longer a way to trade up or cash in. According to the report, while the net worth of middle-class Americans dropped, the median net worth of the wealthiest families increased. There are an estimated 23 million Americans unemployed, underemployed or who have given up looking for work. (The Labor Department reported that Maryland lost 7500 jobs in May following a loss of 5400 in April.) Economic inequality has become America’s most noteworthy product.

In politics, bad news is often viewed as an opportunity for alchemy. On an earlier occasion, at the high-point of the housing foreclosure crisis, Mitt Romney, ever the Harvard MBA venture capitalist, had this to say: “Allow the foreclosures to go on and bottom out so investors can buy houses, fix them up and rent them.” That is the Wall Street version of compassionate conservatism: Eject people from their homes so investors can gobble them up. And now foreclosures are on the rise again, up for the first time in 27 months.

Another piece of Romney’s free-market advice was directed to students: He counseled them not to take out student loans but to borrow from their parents to pay college tuition. Romney opposed the auto bailout as well as stimulus funds. He said, in fact, that the auto industry should be allowed to go into bankruptcy. Romney was also dismissive of teachers and public safety workers, who, he said, are not funded by the federal government. Over the past three years, about 700,000 state and local government employees have lost their jobs as federal stimulus money has dried up. They include teachers, cops, firefighters and sanitation workers.

Romney wants to revert to trickle-down economics wherein he would cut taxes for the wealthy, roll back regulations, repeal Obamacare and generally get government out of the way of business—classic 19th century economics. Translation: If the rich are allowed unfettered free reign, they will re-invest their profits and create jobs and everybody will prosper. Baloney. Those policies didn’t work under Presidents George W. Bush and Ronald Reagan and there’s no convincing explanation why they would work if Romney were elected. In fact, studies have shown that the two Bush tax cuts, in 2001 and 2003, had exactly the opposite effect, the lowest job growth rate of any eight-year period since World War ll.

Romney embraces the Ryan budget, the handicraft of Rep. Paul Ryan (R-WI), which he characterized as “marvelous.” The Ryan budget is basically unchecked run-amok capitalism that would actually create a $5 trillion additional deficit on top of the Bush tax cuts it would preserve. But it would strip the budget of most social welfare programs, including Medicare, food stamps, head start, student loans and others as a way of dismantling the Democratic constituency.

There’s a certain perversity to Romney’s acceptance of Ryan’s madcap economics, based on the self-interest philosophy of author Ayn Rand. Romney laments that America could soon resemble Europe if Obama wins a second term. But it is the very policies that Ryan advances and Romney promotes—austerity and deep cuts in government spending—that have caused the economic catastrophe in Europe.

President Obama caught a lot of grief over his recent statement that “the private sector’s doing fine.” It’s difficult to understand why he backtracked. Obama, in an ironic kind of way, was correct. Private businesses are sitting on roughly $2 trillion in profits which they refuse to invest because of a lack of demand by consumers at home and in Europe because of the financial crisis and the threat to the Euro Zone. The five biggest banks in America control 60 percent of the nation’s GDP but many banks refuse to lend money for mortgages or business start-ups because of the risks in the fragile economy.

In a tidy little financial roundelay, banks, rather than make loans, borrow money from the Federal Reserve at no interest and lend it back to the government by buying long-term government bonds that right now are paying 1.6 percent on one-year paper. Jamie Dimon, the CEO of J.P. Morgan, apologized for losing $2 billion on bad investments, calling them, “indefensible,” but nonetheless collected $23 million in salary and bonuses.

Romney’s emphasis is on Wall Street, Obama’s on Main Street and the middle class. And the simplest way to chart that bread crumb trail is to follow the money. Wall Street’s love affair with Obama, in full flower in the 2008 campaign, is over. For the 2012 campaign, Wall Street has, so far, contributed $37 million to Romney and only $4.8 million to Obama.

And for the first time in May, Romney out-raised Obama, $70 million to $48 million. The amorphous and anonymous Super PACs allied with Romney expect to have $1 billion at their disposal for all kinds of mischief. The Las Vegas money spigot, Sheldon Adelson, the eighth richest man on the planet and the elder statesman of the pro-Israel lobby, has contributed $10 million to Romney and pledges to spend up to $100 million, if that’s what it costs, to have a friendly ear in the White House. But Obama’s an adult who handles rejection well. He’s out courting the likes of George Clooney and Sarah Jessica Parker and the 2.5 million small-dollar contributors in his campaign data base.

In dueling speeches in different cities in Ohio last week, the contrast between presidential candidates and their economic policies was clear. And Obama made certain, repeatedly, that he wrapped Romney and Congressional Republicans in the same economic package. Polls show that the public blames the nation’s economic troubles on the previous (Bush) administration and obstructionist Republicans in Congress, which has the highest unfavorable rating ever.

Romney, in his Cincinnati speech, said: “You may have heard that President Obama is on the other side of the state [Cleveland] and he’s going to be delivering a speech on the economy. He’s doing that because he hasn’t delivered a recovery for the economy. And he’s going to be a person of eloquence as he describes his plans for making the economy better, but don’t forget he’s been president for 3 ½ years, and talk is cheap. Actions speak very loud.”

For his part, Obama told his audience: “This election presents a choice between two fundamentally different visions of how to create strong, sustained growth, how to pay down our long-term debt, and most of all how to generate good, middle-class jobs so people can have confidence that if they work hard, the can get ahead. This isn’t some abstract debate. This is not another trivial Washington argument.”

But the kicker to the speech was how Obama framed the solution by placing the choice squarely with the voters: “This is a make or break moment for our middle class. What’s holding us back is a stalemate in Washington… The only thing that can break that stalemate is you,” Obama told his audience and the voters. “What’s lacking is not the capacity to meet our challenges. What is lacking is our politics. And that’s something entirely within your power to solve.” And that’s about as clear as an election gets.