Another Maryland politician who speaks before he thinks. 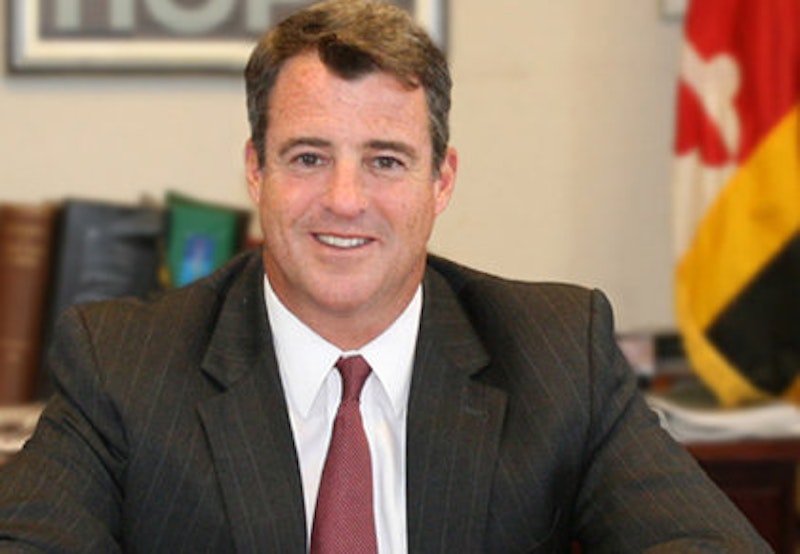 Maryland Attorney General Douglas Gansler (D) is a reporter’s dream. He says what he thinks but often doesn’t think about what he says. That may be good copy, but it’s bad politics. Those who scolded him for saying that Lt. Gov. Anthony Brown (D) is a one-note candidate for governor who’s relying solely on attracting black voters weren’t paying close attention. Gansler wasn’t playing the race card. Gansler said he’s doing exactly the same thing as Brown.

But producing page-one stories is unlikely to win many votes. Nobody’s denying that Gansler said in public what he might have thought in private. According to a transcript of a recorded campaign pitch to supporters obtained by The Washington Post, here’s the supposedly offending passage: “I mean, right now his [Brown’s] campaign slogan is ‘Vote for me, I want to be the first African American governor of Maryland. That’s a laudable goal, but you need a second sentence: ‘Because here’s what I’ve done, and here’s why I’ve done it’.” (For the record, Brown’s father is Jamaican and his mother, Swiss.) Translation: Brown is relying more on color than accomplishments.

And here’s Gansler’s other quote that was buried, if not overlooked, for the more combustible phrase: “It [Gansler’s running-mate] will be an African American, and it will be someone from Baltimore or Prince George’s. I cannot overstate the amount of pressure I have from both of these places to get a person from there.” Decoded: I need a running-mate that resembles Brown.

Just what, it is fair to ask, is the hellacious fuss? It can’t be said that Gansler was, to be charitable, off-message. So far, his gestating campaign has no discernable message except his persona. Let’s hope he doesn’t confect a smarmy slogan to compete with Brown’s Chamber-of-Commerce-y “We can make Maryland even better.” Spare us. Nor is Gansler going Bullworth, the eponymous movie in which Jay Billington Bullworth’s outrageously offensive yet truthful remarks as a candidate make him a media darling.

Gansler stands accused of injecting race into the 2014 campaign for governor when, in fact, what he’s really guilty of is being careless, or worse, blissfully ignorant. He hasn’t learned engage his brain and his mouth simultaneously in the age of electronic ubiquity where everybody and everything is wired (or wireless).

President Obama has bumbled before open microphones; Mitt Romney landed in the soup for the stealth recording of his 47 percent remark; and countless radio and TV reporters have fallen for ignoring the trade’s fundamental caution—assume every microphone is on and live. In short, whenever two or more people gather, candidates should keep their innermost thoughts to themselves. Gansler should know better. This is not his maiden campaign.

But Gansler has always been a John Wayne kind of guy. He once boasted that he will be America’s first Jewish president. He was reprimanded by the Maryland Court of Appeals for inappropriate statements. As Montgomery County state’s attorney, he antagonized judges by criticizing punishments he didn’t like. And he engaged in a public dispute over jurisdiction during the District of Columbia sniper case.

Like it or not, race is always an underlying calculus in Maryland politics. The state’s black population is 33 percent, the largest outside the Deep South and the fifth largest in the nation. And to Gansler’s point correlating geography and pressure, Baltimore’s black population is 69 percent and Prince George’s County’s is 74 percent. Blacks now often out-vote whites.

The state’s first black lieutenant governor was Michael Steele, of Prince George’s, who established the format for Brown’s ascendancy from the House of Delegates to the state’s second highest post as understudy to the governor. Race, and the ensuring furor, was first dragged openly into the contest in 2002 when The Sun editorialized that Steele “brings nothing to the ticket but the color of his skin.”

Steele had been the state’s Republican party chairman when he was chosen as a running-mate by Robert L. Ehrlich Jr., the first Republican to win the governorship in a generation. In the 2010 rematch between Ehrlich and Gov. Martin O’Malley (D), two Ehrlich campaign aides—Julius Henson and Paul Shurrick—were indicted and convicted of what amounted to attempts to suppress the black vote. Their real offense to rational sensibilities, similar to Gansler’s, was that they were naïve enough to communicate by traceable email.

In the 1992 U.S. Senate election, Republican nominee Alan Keyes, a black, was accused of exploiting the racial issue by posting campaign signs throughout inner-city neighborhoods that read: “Vote for Keyes—He’s One of Us.” And in the 1995 Baltimore mayor election, Kurt Schmoke’s campaign, under the direction of attorney Larry Gibson, was criticized for using the colors of the pan-African flag—red, black and green—as the Crayola background on Schmoke’s bumper stickers.

Race is as much a part of Maryland politics as bull roasts and bobtail ballots. It is Gansler’s second observation about the pressures of geography that will cause him more grief than the first about Brown’s color. Gansler has acknowledged that he is under pressure to choose a black running-mate from either Baltimore or Prince George’s.

So saying, Gansler has corrupted the franchise that blacks have come to regard as their very own, the lieutenant governorship. It is now a question of whether any credible black candidate from either jurisdiction, say, a Del. Keiffer Mitchell or Comptroller Joan Pratt, both from Baltimore, would be willing to join Gansler’s ticket, knowing that there is deliberate manipulation to mimic Brown’s coloration.

Anyone who does would immediately be suspected by other blacks of having made a deal with the devil on the basis of color alone, precisely the accusation that Gansler is leveling against Brown. So Gansler may have difficulty recruiting a first-tier running-mate at the level of Brown’s second banana, Howard County Executive Ken Ulman.

There have been the usual schoolyard noises between the two campaigns in what has become the first public jolt in a contest that is yet to get underway. Brown declared his candidacy in May and Gansler has said he will formally announce in September. Brown’s campaign has demanded an apology but Gansler is offering no such thing in return. Gansler’s default position is that he said nothing that requires an apology.

But Gansler will be Gansler. You can bet on it. He said nothing more than any other candidate has said in private and out of earshot. Only he said it to an audience, and a friendly one at that. It’s not so much what a candidate says that’s damaging; it’s the reportage that’s lethal.