I have nostalgic feelings for any area in which I’ve worked, and W. 29th is no exception. 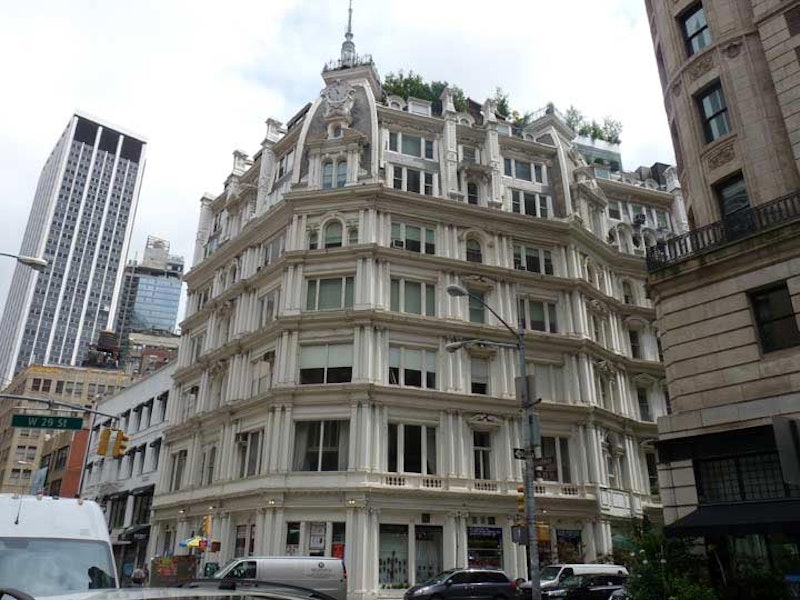 In the spring of 1988 I was working nights at Photo-Lettering, at the time the NYC capital of type that distributed thousands of fonts; most of its business was in advertising and a lot of esoteric fonts were used for headlines. Because people read a lot more in the 1980s and had patience to read ads, there was plenty of copy and lots of typesetting was involved, and I proofread and occasionally pinch-hit in typesetting. Before the days of “what you see is what you get” (WYSIWYG), typesetters used computer terminals but had to enter long skeins of code to get the type to do what you wanted, with italics, different sizes and widths (type sizes are measured in points in the biz, while column lengths are measured in picas).

Before “jobs” ever go to the typesetters, though, they had to be marked up by the staff as to what sizes and widths it should be. Sometimes, type had to “wrap” around artwork. Again, before WYSIWYG, such specifications, or specs, had to be worked out by the markup staff, because each line had to have a specific indent to wrap around the art. Frequently, the typesetting staff had to cool their heels on busy nights while they waited for the markup staff to prepare the “jobs.” By the spring of 1988, I was confident enough to pitch in and help mark up the jobs. Workflow improved. But I’d crossed a line. One night the night manager told me I was no longer to mark anything up. To my knowledge no disastrous errors had been made.

I called the day manager, hoping for a reasoned discussion, but was met with a barrage of curses. I was tired of working nights anyway, which I’d done since 1982, and went to the Al Smith agency, which placed copy jobs including markup, proofreading and editing; at one time such jobs were so plentiful they made up two columns in the Times employment section, which was 40 pages in the 1980s. I spoke to Al Smith himself, a distinguished, silver-haired fellow, and was immediately sent over to ANY Phototype at 130 W. 29th St. ANY was run by two Russian brothers and a business partner, and published ads, magazines and printed material in multiple languages. I handled proofreading and typesetting of all publications except the ones in Russian, which uses Cyrillic characters. At the same time I attended classes at the now-defunct Center For the Media Arts, learning how to use Apple computers, QuarkXPress, Photoshop and Illustrator. After ANY was short on money and laid off staff, I was set up with new skills and hired by Publishers Clearing House, then in Port Washington, where I worked for 12 years in two separate stints.

I have nostalgic feelings for any neighborhood in which I’ve worked, because ever since I got out of school, I’ve always considered it a minor miracle to be hired. I was able to work in the type biz in multiple roles steadily for 30 years, but the market has closed up considerably since 2011. So I walk down W. 29th now and then, just to see what’s up all these years later.

The Gilsey House at Broadway and W. 29th goes back to 1869 and was designed by Stephen Decatur Hatch and Daniel D. Badger. When I was working in the area in the late-1980s it was painted deep brown, but was later restored to the cream color it was reputed to have had when it first went up. It was the first hotel to offer telephone service to guests. It had a bar made of silver dollars. Oscar Wilde, Mark Twain and Diamond Jim Brady, the great gourmand, were frequent guests. By 1911 the Gilsey closed down and the rooms were occupied by garment trade lofts for several decades.

When working at ANY, I’d sometimes have lunch at a long-gone German restaurant that occupied one of the storefronts on the W. 29th St. side called The Olde Garden, which was very atmospheric, with a great feel of Old New York City. 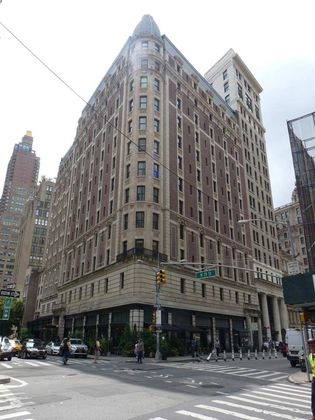 From 1875 to 1895 Broadway in this stretch was NYC’s vice capital: gambling dens, music halls and prostitution. It was known as the Tenderloin district because cops on the take were heard to say they could now eat tenderloin instead of chuck steak. There were respectable places amid the hugger-mugger, such as the original Delmonico’s at Broadway and W. 26th. Banard’s Museum, showing sculptures, paintings, caged animals and birds, and a tableau vivant featuring live models and actors depicting scenes from Dante’s Inferno. 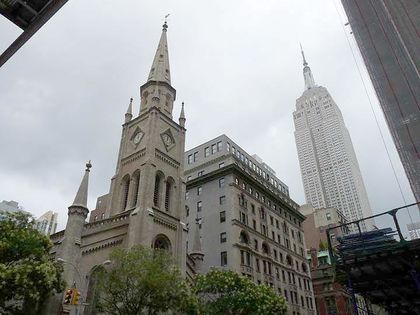 Fifth Ave. is the Boulevard of Churches. The Marble Collegiate Church is older than it looks: it was built from 1851-1854. The congregation itself—ultimately a part of the Dutch Reformed Church—was founded in 1628. Marble Collegiate is best known for being the pulpit from which Dr. Norman Vincent Peale spread his optimistic teaching, though Peale’s legacy is tainted in my book because he opposed JFK’s presidential campaign because Kennedy was Catholic. Richard Nixon was a congregant and Donald Trump married his first wife Ivana here.

I was happy to see the Episcopal Church of the Transfiguration, “The Little Church Around the Corner,” once again revealed after a few years under construction netting. The church was founded by Rev. Dr. George Houghton in 1848, and in the following year, the small brick church appeared at what was then the city’s northern edge, even before the street grid was cut through. Houghton, an abolitionist, made the church a sanctuary for blacks fleeing the Draft Riots of 1863 and a stop on the underground railroad.

The church has been a favorite of actors since 1870, when Joseph Jefferson requested a funeral for his friend George Holland at a neighboring Episcopal church. Upon learning Holland was also an actor, the church refused Jefferson, telling him to seek out the “little church around the corner.” A stained glass window depicts Joseph Jefferson, in a role as Rip Van Winkle, leading the enshrouded Holland. Today, the church and parsonage boast a charming garden, an oasis from bustling 5th Ave. 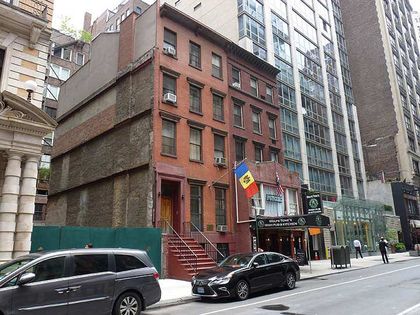 A pair of interesting walkups at #35 and #37. At #35 the tricolor flag is that of the Republic of Moldova, a country in Eastern Europe that attained independence upon the breakup of the Soviet Union in 1991. Next door at #37 is Wolfe Tone’s Irish Pub & Kitchen. Irish patriot Theobald Wolfe Tone (1763-1798) attempted to establish a united Irish free state but was forced into exile in 1794. Upon trying to re-enter Ireland he was arrested for treason and died under mysterious circumstances in prison, apparently after an attempted suicide. He is buried in County Kildare. His wife, Matilda Tone, moved to NYC in 1815 and joined her son, who was working for the US War Department, in Washington the following year. Upon her death she was originally buried in DC, but her descendants had her moved to Green-Wood Cemetery in 1891.