Notes from an Election Inspector

In this volunteer's eyes, the system worked. It could be better, but we don't live in a dystopia yet. 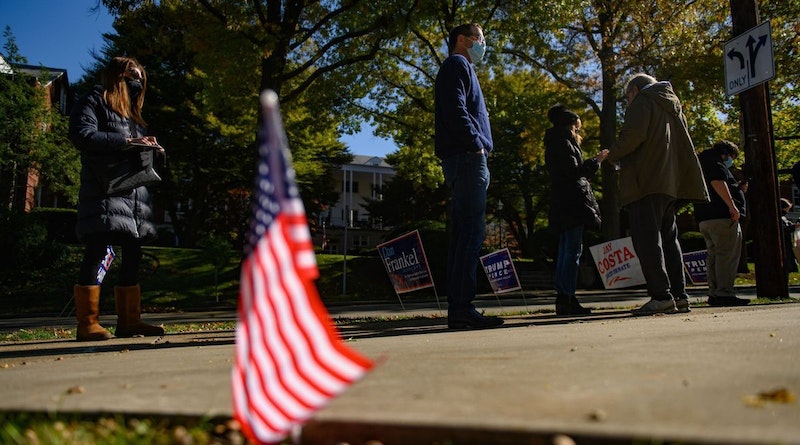 On Election Day, I spent about 17 hours in the common room at an Elder Residence in Western New York. During the course of a really long day, about 800 people from two Electoral Districts came to vote. I’d attended several hours of training on procedures, and two different pieces of voting hardware. I was also taught how to use the different documents involved in confirming a voter’s eligibility. Finally, I learned the steps to correctly set up the physical space, including placing signage about where candidates could place their signage.

Members of the two major political parties were named as “Inspectors,” but not like those folks in Pennsylvania who watched over the shoulders of people counting ballots. Our Inspectors coordinated the efforts to get voters certified and through the voting process.

After filling out a paper ballot at a privacy booth, the voter brought it to a scanner, and the Inspectors helped voters understand how to insert the ballot. The scanner sits atop a container that looks suspiciously like the bin where you put your recyclables. If all is copacetic with the ballot, it drops into the locked container, and the scanner screen displays an image of waving stars and stripes and a message telling the voter they’re done, and the ballot will be tabulated.

That’s often what occurred on Tuesday, but not always. Sometimes the scanner spit the ballot back out the tray, and the screen displayed a message with a poorly-worded explanation of what had gone wrong. Most often, a voter had voted for a single candidate on two party lines, or voted for two candidates for one office opening. Inspectors directed the voter to return their now “spoiled” ballot to the registration table, and they’d be given a new ballot to work. Rarely did it take a voter more than two attempts to get the job done.

Another type of spoiled ballot occurred when the voter used an X or a check mark to record their choice. The scanner is set to read a vote from a filled-in oval next to their choice’s name.  Unfortunately it’s been years since the verbiage on the privacy cards has been updated. When a ballot kicked back for the use of Xs, you can understand a voter’s dissatisfaction, given that the privacy card says that Xs are just fine. Blame the county for trying to save some money.

Generally speaking, people were friendly, if a little embarrassed to be asking for help. No trouble, this isn’t something we do very often, and through the day it was also apparent that a number of people were voting for the first time. A head would pop up over a privacy card, and someone would ask, “Do I have to vote for all of them?” Evidently, Family Court Judge was not a concern for some folks.

One gentleman expressed his disdain for a presidential candidate when he loudly let everyone in the room know that the candidate, while swimming with female Secret Service agents, removed his trunks and exposed himself to the agents. No one bothered to ask the voter where he’d come across this information. Outbursts like this were rare.

At the end of the day, Inspectors from both major parties followed the published steps to properly take the scanners off-line, print a tabulation of votes, and remove a USB jump drive from the machines. Those drive’s IDs were recorded, and sealed in a pouch which then got a seal of its own. The ballot bins below the scanners were locked with metal zip-ties, also numbered, and the spoiled ballots were recorded as well. Other voters finished their process by filling out affidavit ballots.

Everything is documented. Everything has multiple sets of eyes on it, from both parties. Certified poll watchers came periodically throughout the day to record voter totals. Those numbers were about turn-out, and couldn’t be used to determine actual results.

At this polling place, things were busy all day. There were a few voters in line at 5:50 a.m., before we could officially open. I’m sure this has to do with the fact the polling place was inside an Elder Care facility. We took away their bingo room for the day, so they came to vote. Early.

To this set of eyes, the system worked. It still needs work to get better. We all do.