Say what you will about the contentious Florida governor, at the least he’s driving Trump out of the news cycle. 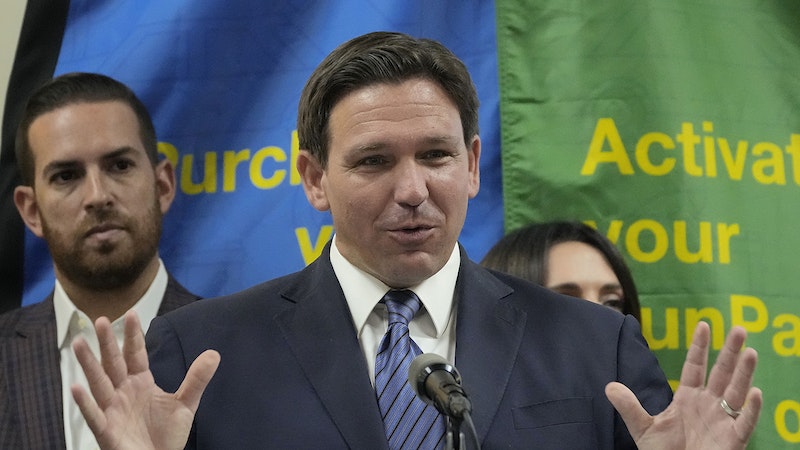 What’s the status on criminal proceedings against Donald Trump? So what, who cares. And for all those people who can rattle off the name of Joe Biden’s attorney general in less than a minute, here’s a Maryland State Fair kewpie doll for that we-must-save-democracy diligence. I’m sort of joking—although even two months ago, post-Mar-a-Lago ransacking of Barron and Melania’s rooms, I doubt Merrick Garland was familiar to most Americans—but it’s swell that Trump isn’t nearly as prominent in the media’s pages, websites and telecasts. There’s a new kid in town, as the Eagles sang in the mid-1970s (the only decent song on the horrendous Hotel California) and whatever your feelings are about Florida Gov. Ron DeSantis—mine are mixed: liked his Covid policies, hate his imitation of Elmer Gantry Pence on social issues—his dogged pursuit of the presidency has succeeded in scaring the establishment media so silly that those self-appointed guardians of our Sweet Land of Liberty have figured out, at least temporarily, that the Trump click-o-meter is running at half-speed.

I was taken aback, perhaps naively, last week when DeSantis’ on-the-surface-hilarious political theater sketch of sending 50 migrants to Martha’s Vineyard was more than a two-day story. Naivete is mentioned because had I thought about it seriously, instead of sloughing it off as a comic bit designed to make a quick point, the explosive reaction of Democrats (National Guard brought in to corral the honorary “terrorists,” the NIMBYism on display in full fruit-salad regalia—my only nod to that monarch’s year-long funeral activities in the U.K., although pro forma condolences to Paddington—and finger-pointing the likes of which haven’t been seen since the Capitol “insurrection” almost two years ago) was entirely predictable. Has my fastball dipped in velo, has the sinker hung over the plate? Jesus, I hope that’s not the case, but if so, I’m in plenty of company, sympathetic, agnostic and hostile.

As noted in this space over the years, the single most important issue to me is comprehensive immigration reform; not a blue-ribbon commission, not a toothless “Grand Bargain” debate in Congress, not a presidential speech, but a 30-day overhaul of the complete system. The United States is in an era of vicious Xenophobia—not confined to one party, although Republicans are more vocal and disgusting in their denunciation of people (obviously, bad-apple immigrants need to be weeded out as effectively as possible at the borders) who want a better life. It’s been said and written about a million times but remains true: America’s a country of immigrants, and you’d think with all this yammering about the death of democracy that the “elite” in the Beltway cognoscenti would skip one beat from their DeSantis/Trump bashing to remind their readers/viewers of that. Then again, after last weekend, maybe reporters and editorial writers at The New York Times and Washington Post are no different from creeps like Sen. Ted Cruz and share a hate of “foreigners,” except the Asians, it goes without saying. Better restaurants!

(Maryland Gov. Larry Hogan—AWOL for about a year—doesn’t have the balls, but he’d receive 100 legacy points if he said, sure, Maryland will gladly take in 10,000 immigrants. It’d be a boon for the state, and Baltimore City, and it’s not as if there aren’t plenty of jobs to fill and a need for new entrepreneurs.)

It's difficult to imagine that DeSantis anticipated the political gift handed to him in New England last week. If he really is that politically deft (and I have doubts, and wouldn’t be surprised now that journalists are scared of him, that he has a past that while perhaps not fatal is at least unsavory; true, former VA Gov. Ralph Northman wriggled out his blackface costume, but he’s a Democrat), then, assuming he’s reelected this fall, get ready for his inauguration in January, 2025. I found it interesting, if not trend-setting, that #NeverTrump Times columnist Bret Stephens—not exactly in the Bill Kristol/Max Boot camp since he wasn’t entirely negative about Trump’s policies—is inching toward a more-in-hope-than-enthusiasm embrace of DeSantis. On Monday, in a “Conversation” with Dead Firefly Over Any Republican colleague Gail Collins, Stephens wrote: “I’m no longer a registered Republican, but I’d root for DeSantis over Trump in a primary, and I’d vote for DeSantis over, say, Kamala Harris or Gavin Newsom in a general election, though I hope that’s not the choice I would have to make.” Stephens, at this juncture, won’t reveal what choice he’d prefer, which would be helpful in figuring out his current politics, but my bet is that CIA operative Mayor Pete or Gov. Jay Robert Pritzker wouldn’t cut it.

On the topic of the greasy Gavin Newsom, The Wall Street Journal ran a playful editorial earlier this week suggesting that DeSantis accept Newsom’s tweeted invitation to have a (presumably televised) debate. Acknowledging that Newsom was being cheeky (and that the Florida governor is in a tighter reelection race this fall than his California counterpart), the writer nonetheless thinks it’s a worthwhile idea, although decidedly not because he or she supports Newsom. It read: “Yet a debate, or better more than one, would… showcase Mr. DeSantis in a way that rarely happens through the state or national liberal media filter. Every move he makes is criticized in the national press, and Democrats are calling him ‘scarier’ than Donald Trump even before the November election. That’s even faster than we figured… A debate would let voters see the difference between the California and Florida models of governance. Mr. DeSantis gave a fine speech the other day on the ‘great American exodus’ to states like Florida from progressive states.”

It’s likely the editorial writer was thinking of Ronald Reagan’s legendary October 27, 1964 “A Time for Choosing” speech on behalf of presidential candidate Barry Goldwater. The Arizona Senator lost in a landslide to LBJ (it’s doubtful even a more moderate Republican in ’64, say William Scranton or Nelson Rockefeller, could’ve won just 11 months after JFK’s assassination) but Reagan’s political career was launched. He was elected governor of California two years later, and thanks to the inept Jimmy Carter, won presidency in 1980, a mere six years after Nixon resigned because of Watergate.

But it’s not 1964 or even 2000. I wouldn’t put it past DeSantis—like all politicians he feeds on attention—to accept Newsom’s offer in a gambit to preempt all other GOP challengers (and raise even more money than he already has, reminiscent of George W. Bush in 1998-99). I don’t think it’d be wise: the media would crucify him no matter who “won” the debate, and the perceived arrogance of DeSantis might not play well in Florida. On the other hand, I thought Trump was finished in 2015 after mocking John McCain for getting captured in the Vietnam War, so I’m no expert on post-2015 politics, a drawback shared by 99 percent of all Americans.