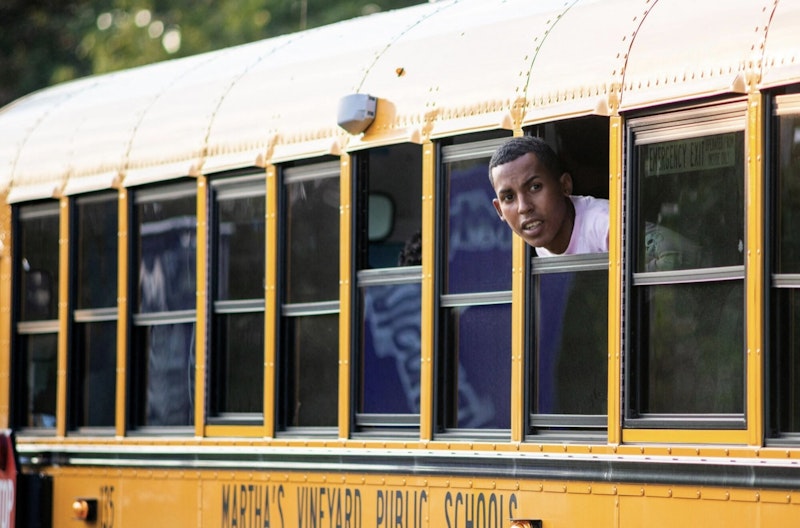 Rarely has there been a more effective political provocation than governors Ron DeSantis', Greg Abbott's, and Doug Ducey's project of busing and flying “migrants” to places such as Martha's Vineyard and Kamala Harris' house. And rarely has there been a less effective and less self-aware response to a political provocation than the administration's and the Democrat Party's spasms of outrage.

DeSantis has received all the attention he wanted and then some. He's highlighted the skull-crushing hypocrisy of mainstream Democrats on immigration. And he's helped himself to the Republican presidential nomination in 2024. And I don't think he's harmed the people he's transported more significantly than they were harmed all day every day already. Would you rather be interned in a migrant camp outside San Antonio, or staying in a church basement in Martha's Vineyard?

White House Press Secretary Karine Jean-Pierre was among many commentators who accused DeSantis of "human smuggling" or "trafficking," and remarked that "it is just cruel, and it's horrific, and it's shameful." At her September 15 briefing, Jean-Pierre was asked whether the administration regards "busing migrants around the country" as "illegal." Even as she spoke, Immigration and Custom Enforcement agents were transporting people all around the country and world by different means, and largely against their wills.

Consider the self-description of ICE Air Operations (IAO), according to which its purpose is "to facilitate the movement of noncitizens within the United States and the removal of noncitizens to destinations worldwide… Since 2006, it has transferred and/or removed hundreds of thousands of noncitizens using air charter services [of the sort employed by DeSantis last week]… Mexican nationals ordered removed from the United States travel on domestic flights from various U.S. cities to southern cities such as San Diego, California and Brownsville, Texas. They are then bused to the U.S.-Mexico border for removal at a land port of entry. Other foreign nationals ordered removed are flown from various U.S. cities or IAO hub cities such as Mesa, Arizona; San Antonio, Texas; Alexandria, Louisiana; and Miami, Florida to Central and South America, as well as to other destinations worldwide… IAO routinely conducts domestic flights to facilitate the transfer, staging and removal of noncitizens via land ports of entry or, for flights abroad as well as regularly scheduled flights to countries with a high volume of removals."

The administration that Jean-Pierre defends has, for example, deported perhaps 30,000 people to Haiti: herding them involuntarily onto flights, and sending them directly into starvation and political chaos. I'm surprised that Jean-Pierre, who’s of Haitian extraction, thinks that being quasi-voluntarily flown to Martha's Vineyard, possibly without the full facts as to what is going on, is obviously far worse than being straight-up force-flown to Haiti.

The reporter who asked Jean-Pierre whether transporting migrants around the country was illegal was very confused. Or else she was addressing that question to the criminals themselves, and should perhaps not have expected an entirely frank response. The outrage appears to be caused merely by the fact that went to Martha's Vineyard or upper-Northwest DC, as against Alexandria, Louisiana.

"Republicans are playing politics with human beings, using them as props," said Biden. "What they're doing is simply wrong. It's un-American, it's reckless and we have a process in place to manage migrants at the border. We're working to make sure it's safe and orderly and humane. Republican officials should not interfere with that process by waging these political stunts." But to say that the administration is working toward safety, orderliness, and humanity—if they are—is to admit that they’re not achieving those goals: not at all, not even close, not for decades on end.

Biden's right about it being a political stunt, however, and the fact that he's talking about it shows it was effective. It's pretty serious too: suddenly Muriel Bowser or Eric Adams have a vague notion of the sorts of issues that face Brownsville, Texas every day. "We're not a border town," said the DC mayor. But neither is Orlando.

I realize that anyone in the American political system is subject to plausible charges of hypocrisy. Condemning X while you do a whole shitload of X is precisely par. But what I think might penetrate even these skulls is that, in thrashing about in their self-destructive hypocrisy, they’re giving DeSantis exactly what he wants. They could’ve prevented this by just saying "Thanks, we need the workers."

Perhaps, in standard Democratic fashion, they regard DeSantis as their weakest opponent and are looking to help him to the Republican nomination. What they ought to worry about, though it's getting to be too late now, is that they’re also helping him to the presidency.