The Florida governor exposed liberal hypocrisy, but at what cost? 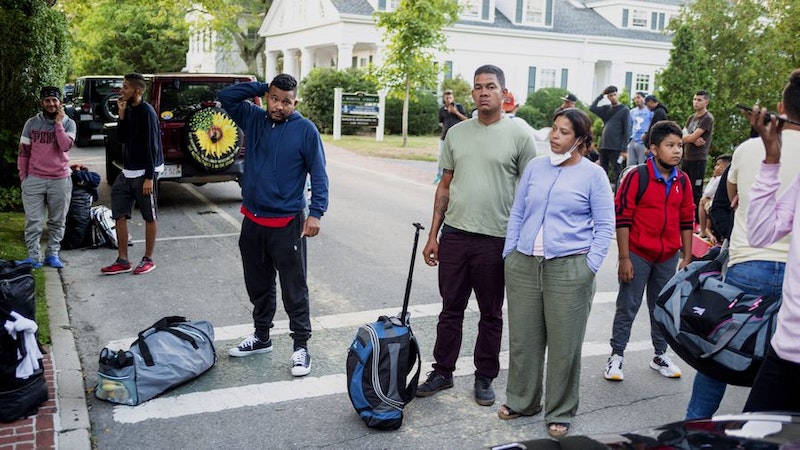 Flying migrants from Venezuela to random parts of the country isn’t the best way to forge a coherent immigration policy. But if you’re trying to out-Trump Donald Trump, it’s not bad politics. When Florida Gov. Ron DeSantis transported about 50 people from Texas to Martha’s Vineyard to own the libs earlier this month, he earned praise from many Republicans and condemnation from Democrats. Regardless of how one feels about immigration, however, it wasn’t a great idea.

One can argue, somewhat legitimately, that the move exposed liberal hypocrisy. Martha’s Vineyard’s year-round population is about 17,000 people, and 50,000 in the summer. Because the Venezuelan migrants were moved from Martha’s Vineyard to Joint Base Cape Cod in Bourne, people can say this is liberal hypocrisy. They can also say Democrats are the real racists, bigoted, sexist, transphobes, the party of the rich, etc.

But for those who live in eastern Massachusetts, this isn’t a revelation. It’s one of the least affordable places to live because of white liberals. That’s not to say the year-round population on Martha’s Vineyard is affluent. It includes retirees and working families who struggle to keep up with the cost of living on the island. Eastern Massachusetts has notoriously restrictive zoning policies that make home ownership unattainable. It’s why in places like Newton and Weston you can find lawns with signs that say “Black Lives Matter” or “In this house, we believe…” that also have a sign opposing a new, affordable housing development like the Weston whopper. We don’t need to use political stunts of people trying to escape authoritarian rule to show that white liberals are NIMBYs.

On the other side, however, Republican politicians oppose affordable housing for political gain. It would be surprising to see a Republican YIMBY candidate in the Commonwealth. DeSantis and his people claimed that Massachusetts is a sanctuary state (it’s not yet). But let’s acknowledge that in Massachusetts, cops aren’t hall monitors asking every single person walking down the street to show proof of their legal residence and imprisoning anyone who doesn’t have it on their person at all times.

If you don’t think these people should be in the country, why send them further away from the border, to a place where there’s no hope of returning them back home? Even locally, we haven’t learned much about who these people are, so I’ve no idea if they have legitimate claims of asylum or not. Then again, the businesses on the Cape and Islands probably don’t care either. Many job listings exist on Cape Cod, especially during tourism season.

Let’s say one supports what DeSantis did because it shows the American public how overwhelmed the southern border is. If Florida, or any state, wants to deter illegal immigration, why not enact mandatory e-Verify? Florida hasn’t done that yet. It’s a free, easy-to-use database that helps deter illegal hiring, removing an incentive for illegal immigrants.

Trump’s undoubtedly upset by DeSantis’ actions. He’s no longer in office or on any mainstream social media platforms. Yet DeSantis is a high-profile governor and can use foreigners as pawns to conduct stunts to appeal to conservatives, nationalists and immigration restrictionists. That could help DeSantis, a culture warrior who wants to run for president in 2024, eat away at Trump’s base. Regardless of the political noise, I hope Massachusetts will vet immigrants, and the state can figure out what makes sense to do from there.