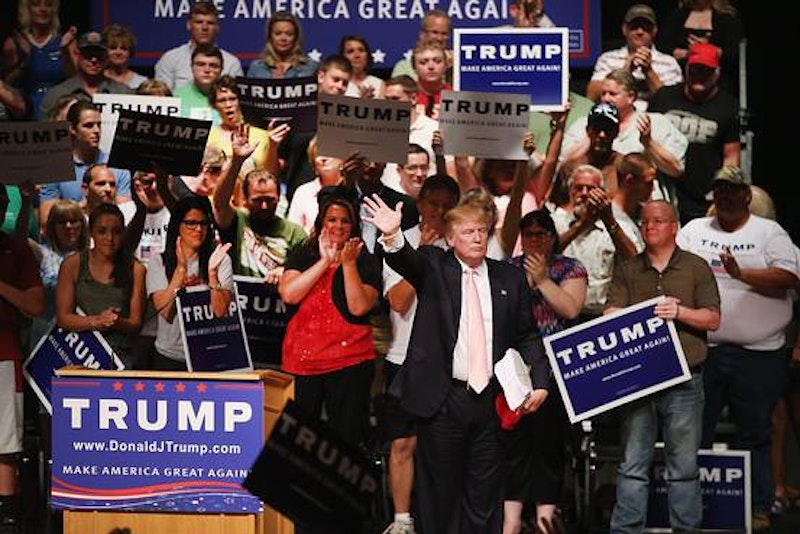 The rabidly anti-tax Club for Growth is running negative Trump ads in South Carolina. The reason's simple enough; Trump's boasted about his (admittedly not well-fleshed out) plans to raise taxes on the wealthy. More generally, Trump has few ties to the conservative establishment, and isn't beholden to them on any number of issues—it's hard to imagine he'd make abortion rights a priority for example. Trump is a wishy-washy, opportunistic conservative at best.

That's why Jonathan Chait has argued that liberals should hope for a Trump nomination. Chait says a Trump nomination has the potential to send the Republican Party spiraling into chaos, and a 2016 loss. But beyond that, Trump would probably be willing to compromise on policy goals in a way that Ted Cruz or even Jeb Bush wouldn’t. In the debate on Saturday, Trump even repudiated the Iraq War… which makes him smarter, and more liberal, than war hawk Chait was back in 2003. Chait concludes, "If he does win, a Trump presidency would probably wind up doing less harm to the country than a Marco Rubio or a Cruz presidency." He points to the other celebrity GOP politician Arnold Schwarzenegger, whose time as California’s governor was characterized by confusion, but also by reasonable compromise. If the Club for Growth hates Trump, then progressives should at least like him more than the other alternatives. Right?

There's a problem with this logic. Yes, Trump would probably be better on progressive tax policy than some other nominees. But his candidacy is defined by, and organized around, white supremacy.

The centerpiece of Trump's presidential run is a explicitly racist stance against immigration, claiming that the US needs to prevent Mexican immigrants from crossing the border because they are likely to be rapists. He's infamously argued for a ban on all Muslim travel to the U.S., and suggested a registry fro Muslims in the U.S. He approved when his supporters beat up a Black Lives Matter protestor at one of his rallies. Unsurprisingly, David Duke, who knows a fellow-traveler when he hears one, has endorsed him for President. Trump said he didn't want Duke's support… but that hasn't stopped other white nationalists from rooting for him.

Trump can't actually fulfill his campaign promise to build a wall across the Mexican border. But he's pandered to anti-immigrant, anti-Muslim, and anti-black sentiment, and there's every reason to believe he’d do so when in office. A Trump presidency would mean more deportations, more surveillance in Muslim communities, more incarceration of immigrants—and who knows what else? It’d certainly mean more racist rhetoric given force and legitimacy by the office of the president.

Again, some of Trump's policies might well be progressive in comparison to Cruz's or Rubio's. But progressive policies aren't necessarily a barrier to racism. Woodrow Wilson, one of the great heroes of progressivism, was also one of the most racist 20th-century presidents, aggressively invading numerous Latin American nations, re-segregating the federal government, and whipping up hatred against immigrants and those of foreign descent.

Chait's a progressive guy himself, and certainly doesn't support white supremacy. But he's also not someone who sees anti-racism as the most important or most central aspect of left politics. He had a long debate with Ta-Nehisi Coates, in which he urged black people to recognize the progress America has made against racism. That appeal to "progress" seems especially embarrassing as Chait urges leftists to root for Trump without a single mention of why some of the people in the Democratic coalition—like Hispanics, and Muslims, and African-Americans—might find that difficult to do, tax policy notwithstanding.

People who are scared of a Trump presidency aren't failing to weigh policy questions adequately. They're reacting to an extremely ugly politician who’s leveraging hateful rhetoric in evil ways. Yes, the GOP as a whole is anti-immigrant and awful, but Trump is deliberately more extreme and unpredictable. To say Trump would be a boon for progressives in any way, you have to either believe racism is not an important issue, or else just not be thinking about it as an issue at all. If you're at all worried about the fate of immigrants, or Latinos, or Muslims, or black people, Trump is not a cute, counter-intuitive positive. He's frightening.